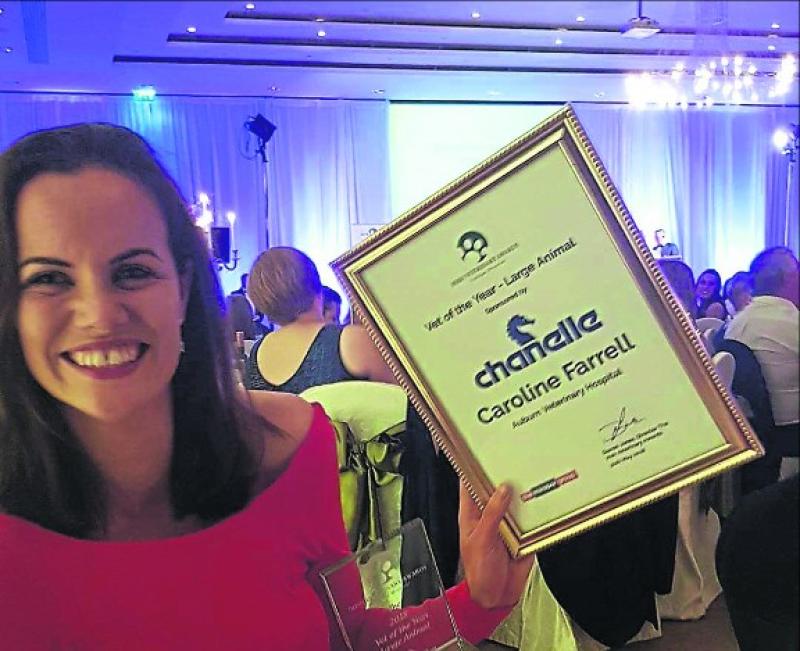 There was huge delight across Longford as word spread on Sunday night that Moydow's Caroline Farrell was named Large Animal Vet of the Year at the annual national veterinary awards ceremony at The CityNorth Hotel, Co Meath.

It was a huge achievement for the popular young Co Longford woman to triumph in the Vet of the Year – Large Animal category, sponsored by Chanelle.

Growing up on the family farm in Moydow, Caroline, was adamant from an early age that she would be a vet.

Said a very proud father, Seamus, "As soon as Caroline could walk all she wanted was ponies and dogs and if one was sick or injured then Caroline came into her own."

But she had to work incredibly hard to get to where she is now and as such the weekend accolade came as no surprise to those who watched her pursue her dream of being a vet and then excelled in her field. She works with the Auburn Veterinary practice in Mullingar.

The Farrell family are well known in Longford equine circles and the family home would have hosted the annual Co Longford Agricultural Show for a number of years.

Caroline is a daughter of Seamus and Bernadette Farrell, and it might be the case now that Caroline will in fact become better known than her father - the famed country and western singer.

Caroline and her sisters are familiar faces and many will remember Caroline from her time when she worked part-time in Ward's pharmacy or was jumping ponies and horses at the local shows.
She was also the Longford winner of the Rose of Tralee in 2005 and proudly flew the Longford colours in Tralee for us that year.

There was genuine delight for Caroline and all the Farrell family as news spread of her great win and many also remembered her late younger brother, James, who sadly passed away a couple of years ago. He would be especially proud of his big sister this week.