Longford built ambulance located in Dublin scrapyard to be restored 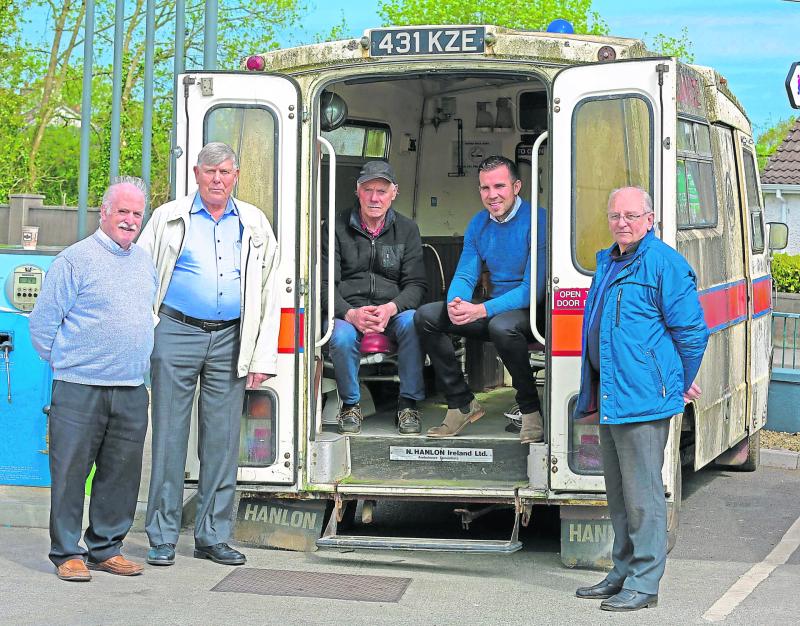 A little piece of nostalgia erupts in Longford this week

A little piece of nostalgia has been unleashed on Longford town this week with the arrival of an historic ambulance built at Hanlon’s Ambulance Factory in the late 1960s.

The ambulance, discovered in a Dublin scrapyard has been brought back to its hometown where she will be restored to her former glory and is currently on display at the Gala/Applegreen forecourt on the Dublin Road.

Patrick Hanlon, whose father Noel ran the ambulance factory in Longford town until its demise in 1988, told the Leader that his friend Joey Fahy from Ballymahon rang him to say that he had seen the ambulance in the yard in Dublin and wondered if the Longford businessman would be interested in buying it.

“So, just for a piece of family history, I said I would buy it and restore it,” he smiled before pointing to what the next step will be.

Patrick says that it is impossible to tell at this stage what the extent of the work involved will be until those in the know get the chance to examine it!
“It’s in reasonable condition inside and because the exterior is fiberglass it should be easily cleaned up,” he continued.

“We will have to see what kind of condition the engine is in and I suppose we won’t know that until we get a look at it.”

The local businessman says it was for “nostalgic” reasons that he bought the ambulance.

“My dad is coming home in July and we are planning on giving him a bit of a surprise with it,” he continued.

“The ambulance was made in Longford; I think it was one of the first one’s made and it went to Waterford.”

Meanwhile, Tommy Lyons, one of the original foremen at Hanlon’s Ambulance Factory said that the manufacturing of the vehicles at the plant began way back in 1967.

“The very first commer chassis to arrive in the factory was driven down from Dublin on a milk crate,” he smiled before pointing out that the chassis included just the windscreen - there was no seats or anything else for that matter, within.

“That was built out in a workshop belonging to Jim Reynolds, before the factory was ever built at all - it started out with one guy and myself building the very first ambulance and then it all progressed on to the factory being built.

“We specialised in ambulances only and by the time I left we were exporting eight to 10 vehicles a week to England.”

Tommy also recalled the very first order at the factory.

“The very first order I remember, Noel went down to demonstrate one that was built in George Duffy’s in Dundalk - it wasn’t built here in Longford at all and that was before he started manufacturing on his own.

“He demonstrated to Waterford Health Authority.

“He said that he got an order for 10 ambulances and he was going to build them himself.

“I was building his house at the time and from there then I went to work for Noel and we started to build the ambulances ourselves then.”

Tommy Lyons, meanwhile, worked at the ambulance factory for 17 years and as he says himself by the time he left in the mid 1980s, there was over 300 people on the shop floor.

“By that stage,” he added, “we were making our own fiberglass moulds and in actual fact we produced the first all fiberglass vehicle here in Ireland.

“Everything was built here, we even did the upholstery here in Longford as well.

“It was a fantastic operation - we had our own wood machine shop; we machined our own timber for the main frame of the ambulance and our own metal shop to make the back steps for the vehicles and all of that - all fabricated in the metal shop.”

Meanwhile, a fire devastated the factory in the 1970s and the whole machine shaft was lost. “After the fire we rebuilt the factory much bigger than it was; we extended the workshop and the factory itself was much bigger and we had a thriving business after that,” said Tommy.

“We had a very busy shop because business was growing in England at the time.”

Larry Wyse also worked at the factory, but he remembers a field with one cow on it long before the ambulance factory was built.

“There was a low ditch along the road and chain-linked fences going up along to Teffia,” smiled Larry.

“Noel Hanlon bulldozed all that out and leveled the field - he was selling cars before he ever laid a block; Hillman cars.”

From the late 1960s it became an important fabric of both the town and county and there was widespread shock and dismay left in the aftermath of the closure for many years thereafter.