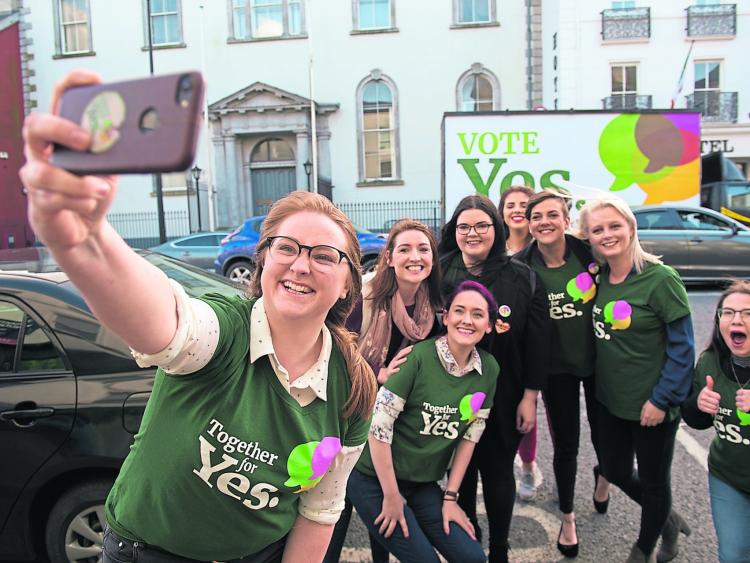 Síona Cahill at the Together for Yes launch earlier this month.

In 2016, 16 women from County Longford travelled to the UK for healthcare services.

More still googled illegal abortion pills, taking them alone at home without continuity of care, and these women could face 14 years in prison.

The question this Friday, May 25 isn’t actually about whether you agree with abortion or not - it is already a reality for women here. The question we are being asked on Friday is whether you believe that abortion access for Irish women should be safe, supported by all the information and guidance available from their family doctor, and regulated within the state.

There are no ‘flippant decisions’ in this discussion. The women behind the statistics of those who have travelled did not make rash decisions, and they don’t want to live lives without consequences.

That this healthcare should be delivered with care and compassion. That is why our nation’s top experts on women’s health, the Institute of Obstetricians and Gynaecologists, and the vast majority of its members are all in favour of removing the Eighth Amendment. When faced with complex cases, their hands are currently tied by the constitution.

I have spoken with hundreds of people across Longford in the last few weeks, and people have concerns about the referendum.

There is a worry that those who access abortions are primarily young - this is not the case at all. Those who travel, in their majority, are older women, already mothers, making the best decision possible for them and their families, having considered everything.

These women certainly don't travel or import illegal abortion pills because they see it now, or would see it ever, as a method of contraception.

I know women who have travelled because they are sick themselves, and continuing a pregnancy would put their life at serious risk. Their decision to travel is often informed by their need to continue to care for their other children already at home. However, in Ireland currently, they can’t be looked after - intervention is only possible if the woman is at death’s door - we can do better for our daughters, mothers and friends than that.

I know women who have received devastating news of a fatal foetal anomaly with their baby late into a pregnancy.

Those women have gone with their partners to Liverpool, because they were denied compassionate treatment at home, doctors hands were tied. I know women who have been made pregnant as a result of trauma such as rape - once again, the constitution means they can’t be supported here. There is no way of looking after these women unless we remove the eighth amendment and instead, legislate appropriately.

People become pregnant under a myriad of circumstances. Contraception fails. We are hurt. Or we are not ready, and we make a mature, considered decision to end our pregnancies as early as possible.

The flight to England doesn't make you think harder, it just makes it more lonely, and more dangerous. Personally, I want to have a family. Calling for safe, regulated access to abortion within the state doesn’t change that. No one is promoting abortions - we are saying it is our duty to look after those who need them here in Ireland.

All the 1983 so-called ‘ban’ did was make procedures and pills here illegal and less safe, and drive people to England for healthcare, and that needs to end.

The people of Longford are people who open their hearts, and are not found wanting when it comes to care, and when it comes to compassion. I am asking you to vote for the women you love - your sisters, your daughters, your grandchildren, your partners and your wives. Vote Yes on May 25.