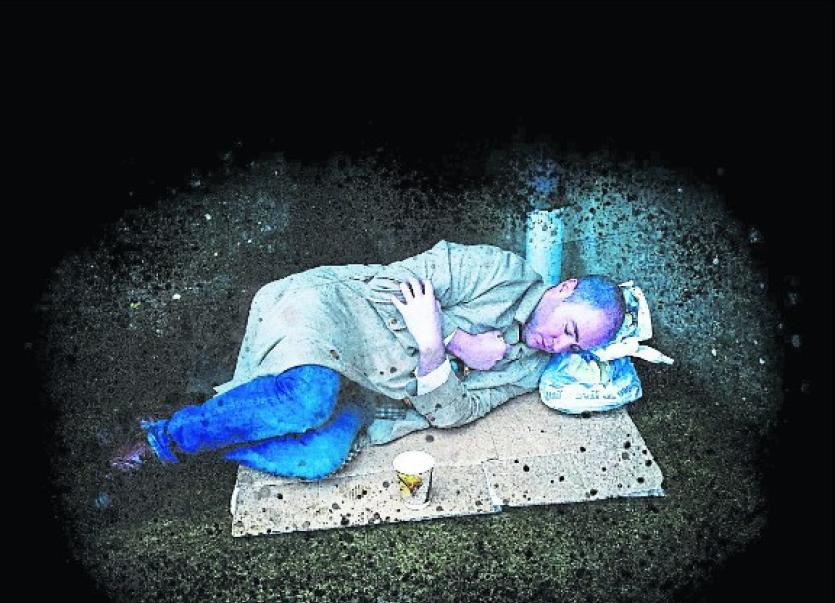 Ballymahon was buzzing recently as one of its own, Valerie Masters, realised a lifelong dream and staged her first play in the Bog Lane Theatre.

'Cardboard Coffin' is a deep, dark and thought-provoking play that tells the story of a sad and lonely man called Johnny, expertly portrayed by actor Jude McLynn.

He ends up alone on the streets, reflecting on a life of love and loss and bemoaning the outcome of his existence.

The play is extremely powerful and forces the audience to think about homelessness a little more deeply.

“Homelessness is real. It's on our doorstep and there is no way to escape it,” Valerie told the Longford Leader.

“It scares me that one day you're part of society and the next it's like you've been picked up and placed on the sidewalk and told ok you can watch us continue our lives but you can't take part anymore because you have no money or address anymore.”

Valerie is well-known in Ballymahon and beyond for her powerful poetry. Last year, she released her second book of poetry, 'Obsession'. But 'Cardboard Coffin' is something completely different.

“There is no comparison,” she said, when asked how writing a play compared to the poetry that seems to come so naturally to her.

“Writing this play was the most difficult thing I ever did in my life. The emotions were overwhelming, the highs amazing and the lows were incredibly lonely.”

But this was a lifelong dream for Valerie and, to see it come to life in the Bog Lane Theatre recently was everything to her.

“Emotional doesn't cover it. To stand in a theatre you love, in front of people you know and who are there to support you and realise that they're about to watch your dream unfold... I was never far away from a tear or a panicked moment,” she said of the opening night.

And there's a great story behind Valerie's dream to become a playwright - a story that goes back to when she was six years old and saw a very famous playwright on television.

“I was allowed to stay up a little late on a Saturday night and one night I was desperately trying to tell my father something random and he kept telling me to whisht as he was trying to hear the man on the telly,” Valerie recalled.

“I listened for a minute and heard the man say he was a playwright. I was dead jealous because the teachers in school used to tell me why couldn't I learn to 'play right' so I told Mam and Dad I'd be a playwright when I grew up.

“They laughed and sent me to bed and I was around 10 before I discovered what playwright actually meant and the man on the telly was John B Keane. By that time I was writing so it seems to have been fate.”

And she didn't do too badly for a first play either. In fact, 'Cardboard Coffins' was completely sold out for all three nights in Ballymahon.

“That is some feeling. I couldn't stop staring at the posters outside the theatre stamped with 'sold out'.

“It was incredible and yet terrifying because nobody knew what the play was really about and yet supported us anyway,” she said.

And it doesn't stop there. In fact, Valerie is getting ready to go to the Smock Alley Theatre in July, where Jude McLynn will again perform as Johnny.

“Imagine having a play in Dublin city. 'Wow' comes to mind but, on reflection of the weekend in the Bog Lane Theatre, nothing will ever compare to standing three nights watching a full audience stand for Jude and then for me,” said Valerie.

“Nothing can ever compare to that and we go to Dublin with the people of Ballymahon in our pockets rooting for us.”

Jude McLynn, who was excellent in his role of Johnny, was “absolutely blown away” by the response of the audience over the three nights.

“I knew that the play would go down well from the minute I read it first, when Valerie sent it on to me, but it was still lovely to get such fantastic feedback,” he told the Leader earlier this week.

“The play touched everybody in attendance in some way and I could just feel the emotion in the theatre as the audience were literally on the edge of their seats, listening intently to every word.

“I knew that this play was very special, both in terms of what it meant to Valerie and also in the quality of the writing in the script.

“I was honored to be asked to be part of what is a phenomenal play and I’m glad that I was able to do it justice. I look forward to touring this play to all corners of Ireland in the next 12 months.”

While 'Cardboard Coffin' raised awareness of the issue of homelessness in Ireland, Valerie was thrilled to report that it also raised funds for a local homeless charity.

Raffles held at the interval raised a total of €750 for Midlands Simon Community, ensuring this play left an even bigger mark on society.

And, now that Valerie has realised her dream of becoming a playwright, there's no certainty that she'll continue to write for the stage.

“I did say I'd never write another play but a certain guy sitting on cardboard, struggling to live, is constantly whispering 'never say never'.

“Thank you Jude McLynn for being that guy,” she said.