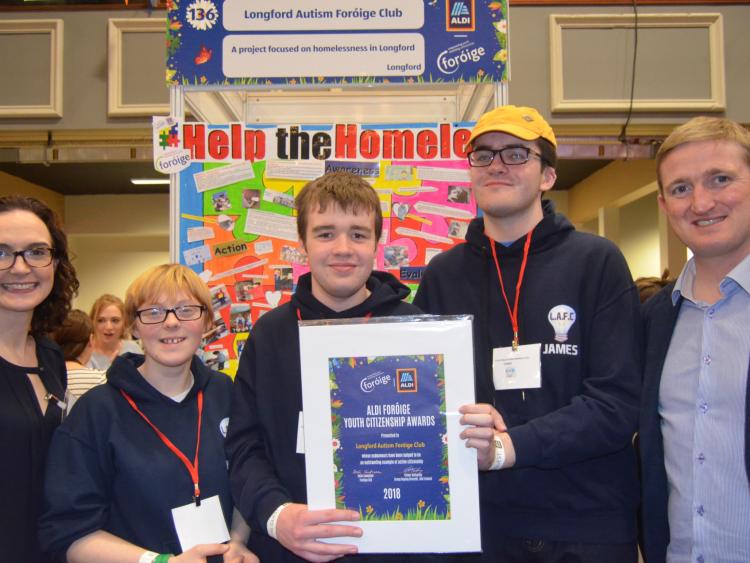 Longford was very well represented at the recent Aldi Foróige Youth Citizenship Awards, which were held on April 21 in Dublin.

Five groups of young people from Longford exhibited their community action projects at the event.

One of these groups, Attic Transition Year Group, won a bronze star award for their project, which organised a tribute night in memory of a cherished friend.

The group paid tribute to the memory of one of their dear friends, Toni Louise Harte with an event entitled 'Toni's Night to Remember'.

The young people felt that organising a music night would celebrate her memory and honour her love of music.

Working as a team they sourced a venue, sound engineers and acts to play at the event.

The event was a huge success, and received a really positive reaction from the audience, volunteers, and Toni's family.

They raised approximately €3,000, which was donated to the charity Aoibhinn's Pink Tie.

They are considering making this an annual event, and are also planning to release balloons in memory of Toni.

The group of young people organised an event to celebrate diversity - culture and different cultural traditions.

They applied to Creative Longford for a grant and held an open outdoor free event, which showcased different traditions, art and music.

There was excellent community involvement in the event, which was enjoyed by all and the group intend to host similar events in the future.

Longford Autism Foróige club's project had a focus on homelessness in Longford.

The group decided to raise money for homeless charities and also raise awareness about the topic of homelessness locally.

They contacted the county council to see how many people are homeless in Longford and what facilities were available to them.

They found out there are two houses in Longford to help homeless people. The group decided to hold a bake sale for these charities.

They raised €511 and learned that the local community is very generous and supportive.

The group arranged to meet with the manager, who gave them a tour of the premises.

They discussed what needs the occupants may have. They then secured a grant from the local Youthbank to help finance the project.

The group chose and purchased the items for the hampers and presented them to Bethany House.

This group discovered there wasn’t a defibrillator accessible 24-7 to the local area, which has 10 estates and six schools.

They chose to do an Easter Egg raffle to raise funds for the defibrillator and bag-packing in a local supermarket.

The group is very proud of their achievement.

And all five groups should be proud of their projects, all of which helped various groups in their local area.

More than 2,000 young people, representing every county in Ireland showcased their community action projects at the Awards, focused on improving the entrants’ local communities in areas such as equality, homelessness, inclusion, community events, mental health, culture and much more.

Darragh Hynes, aged 17, from Meath was named the overall national winner at the Awards.

His Citizenship Project, which raised €2,140 for St Francis Hospice through a culture night event, was chosen from over 200 community projects developed by young people.

Commenting at the Awards, Seán Campbell, CEO of Foróige said: “The Aldi Foróige Youth Citizenship Awards programme is designed to empower young people across Ireland to use their skills and talents to make a positive contribution to their local community.

“The programme involves young people researching the needs of their community, organising practical action in response, evaluating the effectiveness of their work and reflecting on what they’re learning along the way.

“The standard of entry this year was exceptional and we are so proud of all those who took part and everything these young people have achieved in their communities.”

The Awards were opened by Minister of State for Equality, Immigration and Integration, David Stanton TD.

This year was the fourth year Aldi has partnered with Foróige to support the Awards, having recently agreed a new three-year €900,000 partnership extension with the youth organisation.

Commenting at the Awards, Finbar McCarthy, Group Buying Director with Aldi added: “Aldi’s commitment to Foróige is underlined by committing to another three year partnership.

“Every year we have attended the Awards the standard of Citizenship Project entry has improved and the dedication and passion of these young people is very humbling.

“We at Aldi are equally passionate about supporting local communities. In each of the communities served by our 130 stores across the 26 counties, we strive to act responsibly and to go above and beyond in our relationships with local residents, suppliers, as well as charity and not for profit organisations.

“Aldi’s Community Support Programme helps a diverse range of national and local intitiaves, benefiting communities in areas such as health and wellbeing, poverty, food waste and the environment, as well as youth citizenship.

“Every project here today serves as an important reminder that we all have the potential to be a good citizen, and that means action to bring about change for the better.”

Find out more about the Aldi Foróige Youth Citizenship Programme and Awards at www.foroige.ie/citizenship.