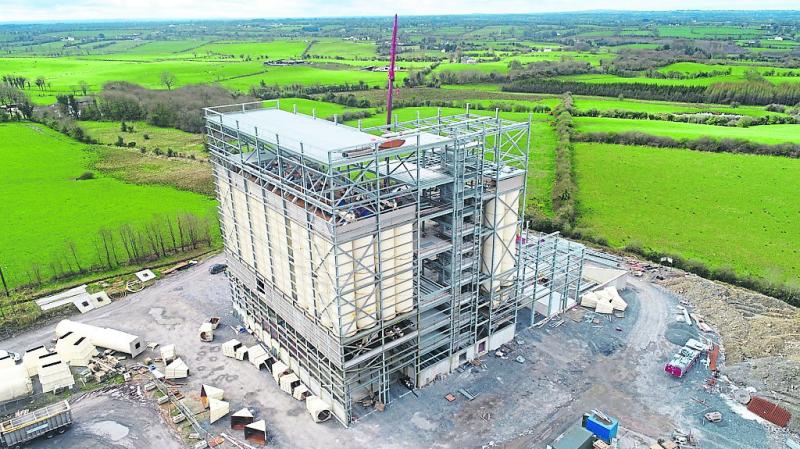 Commercial type developments are one area of the local construction industry which, at present, is undergoing something of a renaissance.

A mainstay of Ireland’s boom time past, there appears to be a discernible variance between that and its present day equivalent.

Unlike its forebearer, the scope and geographical trend of such projects is much different.

Take, for example, the ongoing construction of a second milling facility at Kiernan Milling in Granard.

A bustling market town that was perhaps precluded from the country’s ill-fated Celtic Tiger past, this time around it’s a case of once bitten twice shy for its north Longford business community.

Kiernan Milling is one major local employer that’s leading the way in that regard.

Its latest project is the construction of a new animal feed mill which is adjacent to its current facility.

Construction of the first phase of this project has commenced and will be complete by the end of the year.

During the project, the company will be installing state of the art milling equipment and the latest software to ensure a lean and efficient facility.

Kiernan Milling are the market leaders for pig feed in Ireland, are growing their poultry tonnage and the company has developed their ruminant brand, Stewarts Animal Feeds to in excess of 100,000 tonnes.

This project is not only a significant investment in the agriculture industry, but also in Granard and surrounding communities.

On completion, this new mill will have a production capacity of close to 200,000 tonnes of animal feed, bringing the tonnage to over 500,000 tonnes and making Kiernan Milling the largest single site feed mill in Ireland whilst matching some of the biggest mills in Europe.

There is comparable excitement in Longford town where local food producer Panelto Foods are currently undergoing a major expansion of their own.

Construction work on a developmentwhich will effectively double its 50,000 square-foot premises in the Longford Business and Technology Park is nearing completion.

Local engineer Mark Cunningham, who has been involed with both developments, believes the county is well suited to take advantage of the gradual upturn in Ireland's economic fortunes.

“Longford is ideally located and is central to everything,” he said.

“It has got a great rail and road network which is huge.”

The chartered engineer, who set up his suitably named Mark Cunningham Consulting Engineers, 15 years ago, is certainly well versed when it comes to assessing the present state of Longford's building industry.

He believes this time around, and with a projected decade of construction growth in front of the country, areas like Longford can reap the rewards that come with more far reaching economic growth.

“The country is at the stage now of almost full employment but the good thing about this is that the jobs that are being created are not all construction based,” he said.

“They are more sustainable jobs such as those in IT, business and retail.

“That's a big thing because the last time there was too much of a focus on construction jobs.

“The ones that are being created now are not as vulnerable to market conditions.”

Whatever about the more expansibe nature of labour market expansion, the turnaround in Longford's construction sector has meant his firm has had to put on an after hours consultation service with an in-house architect to meet demand.

But, as he says himself, there are key barometers that can determine just how well a county's building activity is going.

“Two great indicators of economic conditions are the amount of commercial vehicles on the road and amount of planning applications that you see on a weekly basis in the local newspaper,” he said.

Never shy to crack a joke of his own, the local engineer said one particular slogan from his college days in Athlone IT stand out above all others.

“It was our very first class we had when the lecturer got up and marked on the blackboard to write there is always one thing to remember about the construction industry: 'When the concrete stops, everything stops, full stop.”