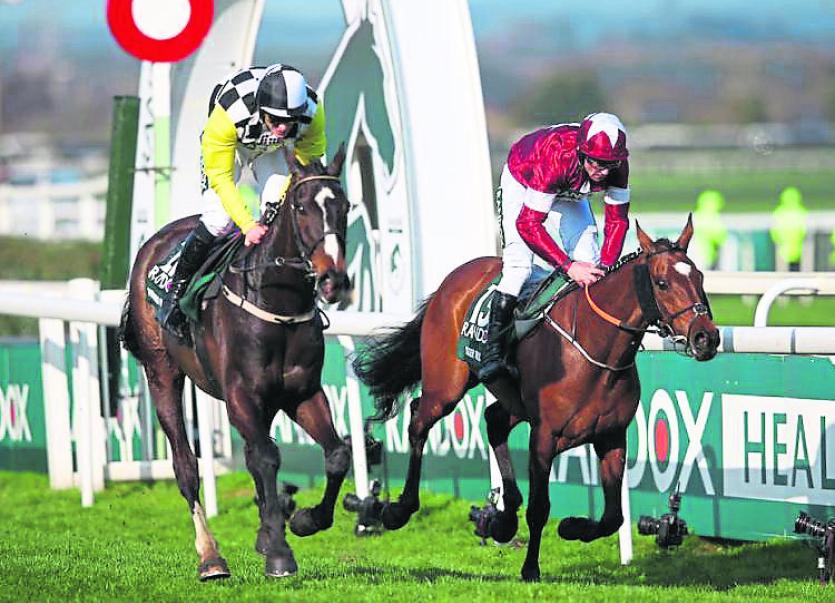 Pleasant Company (left) and Tiger Roll (right) battle it out during the final stages of last Saturday's Aintree Grand National.

Owner of the Longford Leader, Malcolm Denmark came within millimetres of winning this year's Grand National when his horse Pleasant Company was pipped at the post by Michael O’Leary’s Tiger Roll in one of the most dramatic finishes to one of the most famous horse races in the world.

But, not only does Pleasant Company boast that one particular connection to Longford, it also emerged on Monday that the horse was born and bred in Ballymahon by Susan Bredin.

Speaking to the Leader, Ms Bredin said she still has the mother of this year’s Grand National runner up and while she has given birth to a couple of fillies since Pleasant Company, the horse has yet to produce another mare.

The mother, Ms Bredin continued, was purchased as a foal from Tom and Brian Groarke, and Pleasant Company was her first foal.

“I sold Pleasant Company on as a three-year-old,” the local horse breeder proudly told the Leader, before pointing out that the buyer at the time was a man by the name of John Costello.

Meanwhile, Pleasant Company who had headed last Saturday’s race for most of the four plus miles was passed by Tiger Roll during the final hurdle as the Westmeath owned horse pulled away at the elbow.

With the race seemingly wrapped up, the Co Longford bred horse conjured a remarkable comeback but the finish line came one stride too soon as Tiger Roll held on for the win.

“Last year, Pleasant Company came 9th in the same event after making a terrible mistake on the second circuit, so it really is great to see the horse’s progress this year,” added Ms Bredin who then pointed out that the mare’s mother is due to give birth any day now to a foal sired by what appears to be yet another horse to keep an eye on ……’Court Case’!

“There are not that many hunt breeders from Co Longford so last Saturday was a good day indeed for this county,” Ms Bredin concluded.