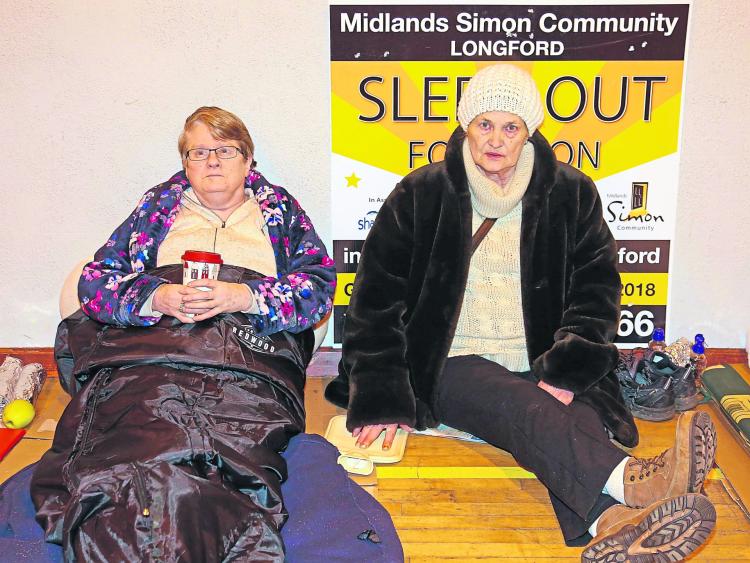 Phyllis Clarke and Florence Lawlor get set for the long night ahead.

The third annual Sleep Out for Simon took place at Connolly Barracks in Longford town on Friday night last where dozens of people of all ages gathered to raise awareness and funds for Midlands Simon Community.

Figures just published show that 488 children and 222 more families were made homeless in Ireland in February 2018.

This means that the total number of children experiencing homelessness now stands at 3,755 while there are 1,739 families in Ireland without a home.

The largest increases were in Dublin, followed by the southwest where the number of homeless families increased by 40% in just one month.

In the coming weeks, in Longford town, a new 10 bed unit for homeless people in this county will open on Earl Street and local Sleep Out organiser, Noel Greene told the Leader on Friday night that Longfordians have raised over €50,000 in the past three years through the Sleep Out and in conjunction with The People of the Year event.

“We are dealing with approximately 30 people in Longford at the moment who are either experiencing homelessness or at risk of becoming homeless.

“The Sleep Out gives people an opportunity to experience what it’s like for a homeless person every night of the week.”

Meanwhile, Jimmy McGuinness volunteered on the night of the Sleep Out to assist those participating in the event.

Speaking to the Leader, he pointed out that he feels there is an onus on him to help those who are less fortunate than himself.

“Homelessness is on the news virtually every other day and so it’s nice to be able to do a small bit, and it is also very heartwarming to see the efforts that people make to come to Connolly Barracks and sleep out,” he smiled, despite the very cold weather conditions!

On the night two teenagers from Longford - Alannah Reilly and Emily Carr - also participated in the Sleep Out.
Alannah explained her reasons for taking part.

“I see the situation in the country at the moment and seeing so many families homeless is worrying,” she said, before adding the event also provided her with an opportunity to experience first hand what homelessness is really like.

“I hope the money I raise will make a small bit of a difference.”

Midlands Simon Community was established in 2004 to support individuals, couples and families who are experiencing, or at risk of, homelessness throughout counties Longford, Westmeath, Laois and Offaly.

Emily Carr, a student at Moyne Community School, says there is a lot of awareness about the homelessness issue at her school.

“Students are taught about it in some of our classes and we also have talks in the school about homelessness as well,” she added, before pointing to the impact that the issue has on her personally.

“Seeing people sleeping out on the street, seeing them cold and knowing they don’t get a hot meal every night does tip at the my heart strings; I think Ireland in general needs more homeless shelters and there also needs to be more places for the homeless to go on colder nights.

“Even if community centres were opened up at night for homeless people, that would be really good.”