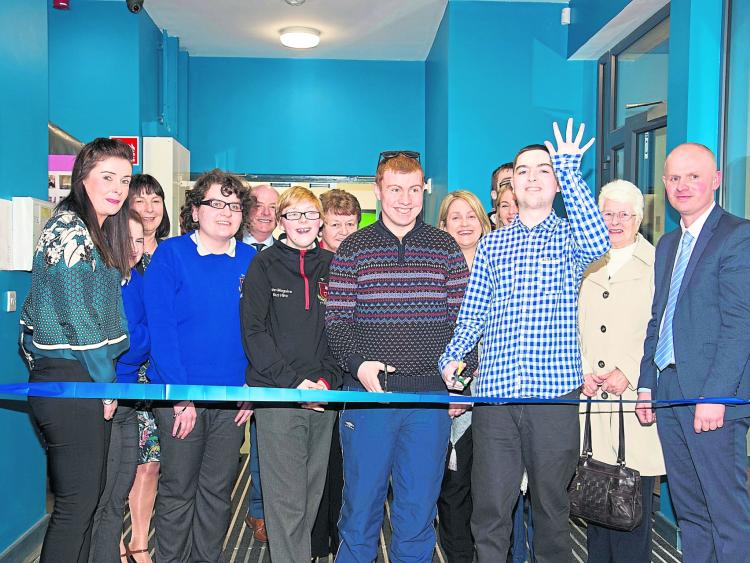 The new Science and Autism Building at Ardscoil Phádraig, Granard was officially opened on Thursday last

It was a wonderful day of celebration in Ardscoil Phadraig, Granard last Thursday when the new state of the art Autism Unit was officially opened by CEO, Longford/Westmeath ETB, Dr Christy Duffy.

Two brand new science labs have also been installed at the school bringing the standard of education at the north Longford secondary school to a very high level.

During proceedings, Dr Duffy said he had a vision in his head that centered around ETB schools being “happy places” for the children in attendance.

“That,” he added, “is my vision and what drives me in my work; I think that is what drives everybody who works here at Ardscoil Phadraig as well.”

The CEO went on to say that ‘happiness’ was important and pointed to how that could be achieved as teachers and pupils went about their daily lives within the second level educational system.

“Happiness is not always being happy in the way people think happiness is about,” continued Dr Duffy, before pointing out that when a person entered a happy place, they became immediately aware of that fact.

“I think it would be difficult for anybody to walk into Ardscoil Phadraig today and not feel that this is a happy place.

Meanwhile, former local area representative in Granard and staunch supporter of the north Longford second level school, Maura Kilbride-Harkin pointed to the importance of the Autism Unit at the school.

Ms Kilbride-Harkin is chairperson of the school board of management and said six of her own children attended Ardscoil Phadraig in the past.

She is now looking on with great pride as her grandchildren enter the secondary school system there.

“Today is a very special day for the young people for whom this fine building was designed and built for,” she said.

“At present there are three class groups in this unit with 19 students; they study many mainstream subjects and some move forward into mainstream education.

“The hard work and dedication of both the students and teachers is commendable.”

The board’s chairperson then went on to say that she was only too aware of the positive interaction between students at the facility and business and community groups in and around the town of Granard.

She also pointed out that none of this would be possible were it not for the commitment of the school’s Special Needs Assistants (SNAs).

“This is very encouraging and has far-reaching benefits for the whole community as well as providing active learning situations,” Ms Kilbride-Harkin added.

“The work and dedication of the six special needs assistants deserves a special mention as these are the people that endeavour to carry on the special care given by parents, to the pupils during the hours they are at school.

“The SNAs support and motivate these young people on a one to one basis and are very involved in fundraising initiatives as well.

“Wonderful work and commitment has been given by this school to generations of youngsters and I wish everyone involved in the education and care of the generations to come, the very best.”

Musical entertainment and singing on the day was provided by the Cunningham and Greene families and the cutting of the ribbon was carried out by former pupils Peter Bennett and Matthew Byrne.