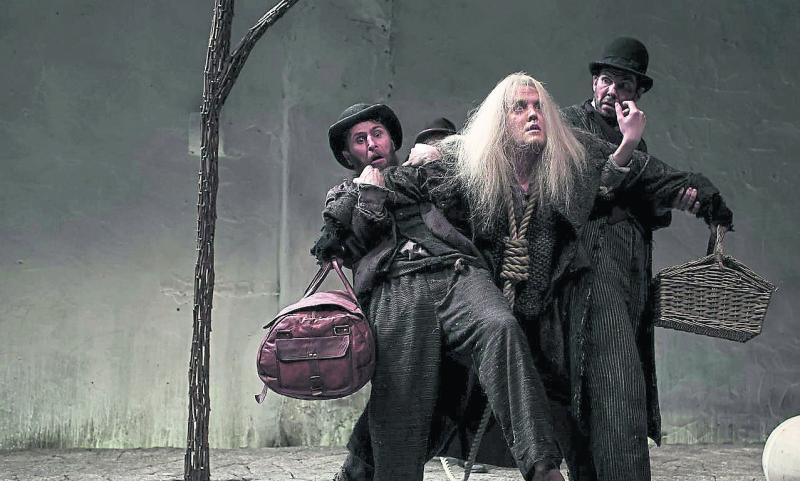 Aaron Monaghan, Garrett Lombard and Marty Rea in action as Estragon, Lucky and Vladamir in 'Waiting for Godot', which comes to the Backstage Theatre next week. Not pictured: Rory Nolan who plays Pozzo

One of the most enjoyable things about theatre is the way characters evolve from the start of the play to the end, and the journey those characters take to get there.

It seems obvious, so, that a play without character evolution or journey would not be quite so enjoyable.

But this is certainly not the case with Samuel Beckett's 'Waiting for Godot' - and especially not the Druid Theatre Company's adaptation of the infamous, darkly-humoured play.

Directed by Garry Hynes, whose reputation precedes her both nationally and internationally, this particular version of the play is not to be missed.

That's largely down to the creativity and talent of the four actors involved; Garrett Lombard as Lucky, Rory Nolan as Pozzo, and Marty Rea and Aaron Monaghan as Vladamir and Estragon respectively.

And, fortunately for Beckett fans, this spectacular version of the play is coming to the Backstage Theatre on March 27 and 28.

“I think this play is about everything,” Cavan actor Aaron Monaghan told the Longford Leader.

“Companionship; what it means to be a human, alive in the world; action, thought, loneliness, isolation and whether we can survive alone or need another person.”

The play can also be quite frustrating, the Leader suggested, because it's difficult to know exactly what it's about.

Aaron took a moment to think before agreeing:

“I think that once you think you know what it’s about, you will get frustrated because then something happens to change everything,” he said.

“It has cycles within it. Every few pages there’s a conversation that kind of starts and ends and goes nowhere… a sort of ‘that’s that; now what will we do?’

“And we have to, as actors, go through these conversations and it can be difficult because usually as an actor, your character evolves, but not in this play.

“Pozzo, who we see in the first act, comes back in Act Two and is completely different, but it’s not the same as a character evolving because he has no memory of it.

“So you just have to sit back and let it happen to you. And that’s why I think this play is about just being.

“The characters do evolve to a certain extent. By the end of the show there’s a certain anguish and exhaustion about Estragon, for example.”

In fact, the Leader suggested, it seems that instead of the characters evolving in this play, it's the actors who grow and learn from it.

“I feel that the reason the play happens on this particular day is because maybe it’s the last. Maybe they don’t come back tomorrow. Maybe they hang themselves,” Aaron mused.

“They’re slightly faded and washed out and they’re in this constant loop of forgetting.”

And, indeed, sitting on the stage and performing the character of Estragon has certainly had its effect on Aaron as an actor.

He sees the play in a completely different way and feels he's getting to know it better and better each time he performs it.

“We did this play in the Abbey Theatre for four weeks and we did something different with it,” he explained.

“When the audience came in, I was sitting very still on a stone. I sat like that for 15 minutes and it made me think a lot.

“And I thought ‘I think Estragon may have had a wife at some point’. I had only gotten married a few weeks earlier and to me it made the character more human and more personal.

“What if he got married and his wife died and he started hanging out with Vladamir?”

This thought certainly adds some extra tragedy to the play and, while there is a lot of comedy in Waiting for Godot, Aaron is quick to point out that is is quite dark.

“This play is not a light-hearted production. A lot of people expect it to be very serious and dour and philosophical and it is,” he explained.

But, he added, when writing the play, Beckett did intend there to be some level of comedy.

“We’re four men in our 30s and we’ve followed Beckett’s instructions to the letter.

“He includes real vaudeville hat routines or falls and there’s really a lot of comedy to it.

“There’s a lot of slapstick comedy. It’s quite funny and a lot of people have said to us that it’s the funniest version of the play they’ve seen.”

And that's down to the talent of the four actors, not to mention the direction from Garry Hynes.

“Garry is one of the best directors out there. The audience love her work and the plays that she chooses and tours. She always makes big, strong, powerful productions. She’s really brilliant,” said Aaron.

“And she has a really brilliant understanding of text and specifically Irish texts. She’ll get the most out of them - the most out of violence, out of passion. And out of humour.

“She has an extraordinary understanding of the actor’s process,” he added.

“She always knows that an actor is in trouble - for example in the first week or two when they’re trying to learn lines and get off the book, she’ll know to give that actor the space to do that and that they’ll get there themselves.

“I’ve seen actors do incredible work in the room, and then she pushes them in a different direction and it goes up two steps more. She sees a better performance in it and then she brings that out.

“She’s wonderful to work with. She’s tough as nails too and a lot of actors might not be able to work with that, but she really is brilliant.”

This project came out of the Druid ensemble of which the four actors in Waiting for Godot are part, Aaron explained.

He and his fellow actors really wanted to do a play with just the four of them and Waiting for Godot was the perfect performance.

So Garry agreed to leave them at it and the results have been fantastic.

“She did a lot when we first started rehearsing, but now she’ll come in every few weeks and give us notes,” said Aaron.

“But she allows us to find it and I love that about her. It was a very brave step to trust us on the play.

“And, not to blow our own trumpet or anything, but I don’t think it’s like any of the older versions of Godot. People are in for a real treat and I really hope they enjoy it,” Aaron concluded.

The spectacular Druid Theatre adaptation of Waiting for Godot will come to the Backstage Theatre on Tuesday and Wednesday, 27 and 28 March at 8pm.

Bringing Beckett to the Backstage