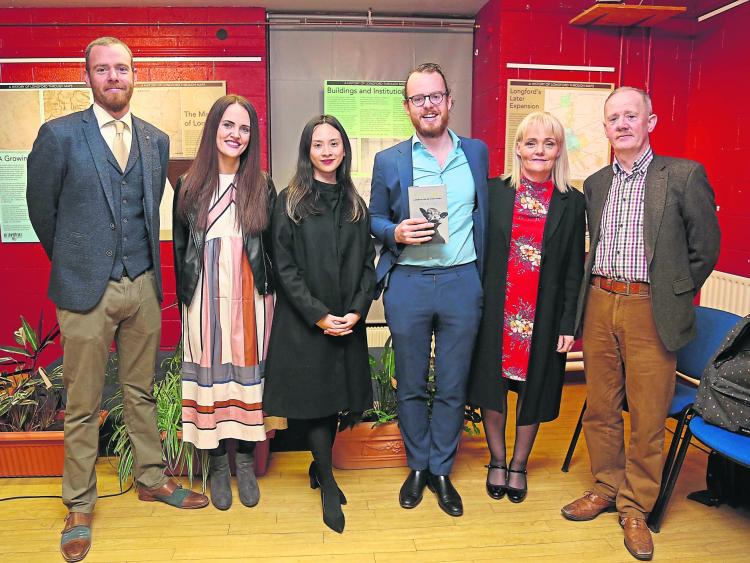 It seemed like all of Killoe turned up last Thursday night for the launch of John Connell's 'The Cow Book' in the Longford Library.

In fact, there were a couple of hundred people milling about the venue by 7.30pm, flicking through books, enjoying wine and music, and keeping a tight hold on their freshly-autographed copies of 'The Cow Book'.

The reason for the tight hold on the books was because every single copy that was on sale at the launch itself was sold out by 7.45pm.

“The book is at number two in the charts now,” said Pru Rowlandson, Publicity Director at Granta Books, who published John's book.

“In fact, the book at number one is a book called 'Fire And Fury',” she added, with a hint of playful disapproval in her voice.

“Perhaps we can help John to trump Trump.”

There was great pride and support for the young Ballinalee farmer who was launching his highly-anticipated book, and a number of special guests stood up to publicly wish him well.

“We teachers are always proud of our students' achievements. And I'm delighted to see you doing so well, John,” he said, addressing his former pupil.

“I know as you plough your creative furrow in the years ahead that you'll reap a great and rich harvest and I wish you well in your endeavours.”

Another special guest on the night of the launch was Fianna Fáil TD Éamon Ó'Cúiv, who read the book and was full of its praises.

“Your life abroad, your life in general, your life here, has enriched you hugely,” he said, addressing the young author.

“But the ultimate influence on your life has been who you are, where you're from, who your neighbours are, the land, the animals and basically everything that you brought with you from County Longford.

“It's well worth buying the book. It's a lovely production; it's a good read.

“I wish you all the best John, with your book and I hope there are many more from your pen.

“And I hope that you continue to be a good advocate for the alternative way of living and for the value of what makes this country the unique place it is for those of us who love the way Ireland was and the way Ireland is.”

John himself was blown away by the amount of support he received on the night of his launch and even became a little bit emotional during his own speech.

“Cities are the farms of men. They give you a career and they give you money but they don't feed your soul,” he said, addressing the attentive crowd.

“Rural Ireland feeds your soul. And farming is the backbone of rural Ireland in so many ways.”

He went on to talk about how important farming is to everyone in Ireland and how it was farming that showed him the true meaning of hard work, before addressing the book itself.

“Little did I think, when I came back here three years ago, that I'd be standing here today with the biggest crowd I've ever seen - it feels like a county final day for me,” he laughed.

“It's really humbling. What's more humbling is that the book is at number two in the charts.

The book, he said is the story of his life and his family's life, as well as the places that define him as a person.

“Those are things that I carried with me when I was an emigrant in other countries.

“I went through some bad times and it was actually all of you people who helped me to get through them,” he said, addressing the gathered crowd of neighbours, friends and family.

“It takes a village to raise a person, but it takes a community to accept a person in the lows and the highs.

“They talk about rural isolation but I've never felt isolation in this place. I've only ever felt welcomed and a sense of belonging.”

John's book, 'The Cow Book', is available now via Newsround in Longford, as well as online platforms, and is well worth the read.

To see a live video of the book launch, which took place last week, visit www.longfordleader.ie.