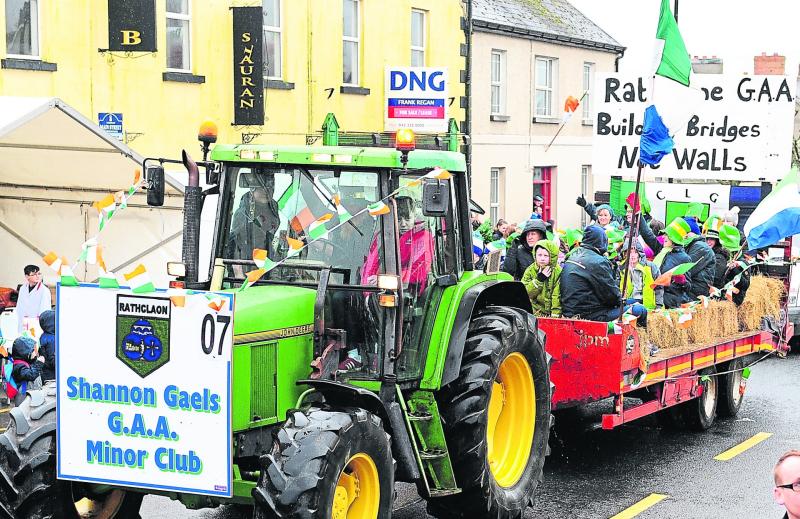 All roads will lead to Lanesboro/Ballyleague this St Patrick’s Day where the stops have been pulled out with gusto to bring the community one of the biggest and brightest parades ever witnessed on either side of the River Shannon.

And to top it all off, lots of stars and celebrities will appear during the parade, which, with no theme this year is expected to become a blaze of colour and fun.

Proceedings kick off in the Shannonside towns on Saturday, March 17 next at 11:30 am with traditional Mass at St Mary’s Church in Lanesboro.

The parish choir will provide the vocals on the day and the Irish Rugby team will be remembered during proceedings as players gear up for their last Six Nations game.

“Musicians will play Ireland’s Call and I’m pretty sure that the congregation will burst into song at this point,” organiser Teresa Costello laughed, before pointing out that the exciting parade would subsequently be the next focal point of the day.

At 2:30pm on St Patrick’s Day, the local parade will commence at St Faithleachs GAA Club in Ballyleague and conclude later at Lanesboro Community College on the outskirts of Lanesboro.

A viewing stand will be made available at the parade’s halfway mark and this will be home to local musicians and distinguished guests on the day.

“This year’s parade will be adjudicated upon by an independent judge and the committee will not be involved with the decisions made, Ms Costello continued.

“We will also have some wonderful prizes up for grabs.

“Five Valley Chile - our local butcher will hold a BBQ for local charity and there will be face painting and lots of funny and interesting characters walking around for all the children to meet.”

There will also be a raffle throughout the day with over €500 worth of prizes up for grabs!

“The results of the Parade and raffle will take place at Clarke’s Bar at 11pm on Saturday night and we are looking forward to meeting everyone there and having lots of craic for the night that in it,” smiled Ms Costello.

“Floats need to be aware that if they are not entered officially, they will not be judged on the day, so don’t miss out on the chance of winning a great prize because you failed to enter.

“Closing date for entries has been extended to Thursday at 6pm due to the amount of queries.”

The local parade organiser also paid tribute to those who have supported or sponsored the local St Patrick’s Day Parade.

“Special thanks goes to the local committee members, stewarts, local business people and to all sponsors including Longford Co Council which provides its backing to the Lanesboro/Ballyleague St Patrick’s Day parade every year,” she added.

“This is a huge day for the people of Ballyleague and Lanesboro and the festival will be great craic and full of colour.

“We will also have €500 worth of raffle prizes up for grabs and we are all looking forward to St Patrick’s Day in Lanesboro and Ballyleague.”