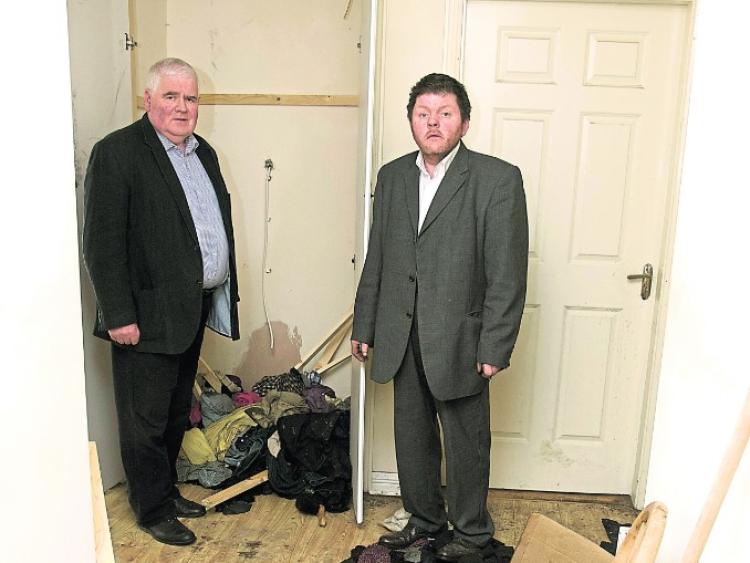 Cllr PJ Reilly and Alec Small survey the damage to Alec's home in Granard at the weekend. Photo: Michelle Ghee.

A north Longford man has told of how callous thieves have left him homeless and his house destroyed after ripping a copper cylinder from an internal wall, causing thousands of euros worth of damage in the process.

Alec Small has not been able to return to his home since the incident more than two weeks ago, instead having to sleep in the nearby Greville Arms Hotel while assessors carry out a flood evaluation of the premises.

The north Longford man said he was still coming to terms with the episode after returning home one evening only to find cascades of water running out his front door.

“They just took out the copper cylinder and flooded the whole house,” he told the Leader over the weekend.

“The whole place was destroyed, there was water everywhere.”

After enlisting the help of two local men, Alec reported the incident to gardaí who immediately launched an investigation.

“I went back to the house and I just seen all the water flowing out of it,” he added.

Pausing to reveal the continuing fallout from his ordeal had left him in “bad humour”, Alec said he was keeping his fingers crossed the damage to his home was not irreversible.

Gardaí have since charged a man in relation to the incident, along with several other similar episodes in Granard and across the county.

The issue is one which has also loomed large on the local political landscape in recent weeks and dominated a large chunk of last week's Joint Policing Committee (JPC).

Drumlish based Cllr Paraic Brady hit out at what he termed as "the slap on the wrists" offenders of such episodes are given when appearing in front of a judge and called for those convicted to have their social welfare payments reapportioned to allow victims to be fully compensated.

"These fellas are coming before the courts and all they are getting is a slap on the wrists," he said.

"They are getting free legal aid as well and it's not good enough."

Cllr Brady cited one example in his own home town where an elderly man returned home from a minor hospital procedure to find his home "torn asunder" after thieves ripped a copper cylinder from a wall, causing thousands of euros of damage in the process.

His Granard Municipal District colleague Cllr PJ Reilly was just as vocal and was one of those to try and assist Alec in accessing alternative accommodation following the break-in.

He branded the incident as little more than a “desperate low act”, a circumstance made worse by the fact the damage would more than likely fall at the behest of the taxpaying public as the house concerned belongs to Longford County Council.

“It's an OPD (Older Persons Dwelling) house and is very concerning,” he said.

The Fianna Fáíl councillor said the only way to stamp out incidents of its type was if the judiciary handed tougher sentences to known offenders.

“I would be pleading with the courts to take a very dim view of this sort of criminality,” said Cllr Reilly.

“To break into someone's home like that and leave the sort of destruction and damage it has in this case is absolutely shocking.

Longford District Court: Man remanded in custody after pleading guilty to stealing copper cylinders and piping from homes across Longford and Leitrim