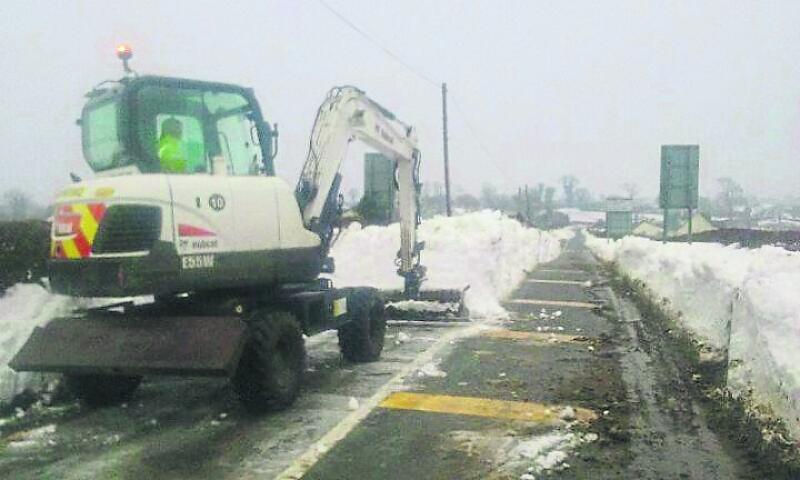 The clean up costs linked to the worst storm Longford has experienced in more than 30 years is set to cost upwards of €5m.

Central government chiefs are to be pressed into setting aside emergency funding to tackle the huge repair bill which has been put on the damage caused to Longford carriageways over the past 48 hours.

Several local politicians said they intend lobbying senior government officials over the coming days with a view to ring-fencing contingency funds as soon as the predicted thaw from Storm Emma sets in.

"When Storm Ophelia hit south Longford last year the total damage to roads in south Longford was put at €2.2m so if you look at the rest of the county your talking somewhere in the region of €5m which is a conservative estimate," said Cllr Mark Casey.

Cathaoirleach of Longford County Council Cllr Martin Mulleady said he was in regular contact with local authority bosses over the issue, stressing pressure for State aid would be required almost immediately.

"There will have to be a meeting about this," he told the Leader.

"Central government will have to come up with extra funding to deal with the way the roads will be left.

"It's not just Longford, every council will need it (additional monies) but I am concerned about Longford, so yes, we will be seeking extra funding, simple as."

He was joined in those overtures by Longford Fine Gael group leader Cllr Micheál Carrigy.

"We (Longford County Council) will be looking for extra funding," he said.

"With all the salt which has been put onto the roads and with the freezing conditions we have had, the extra resources put in by Longford County Council will have to be compensated for.