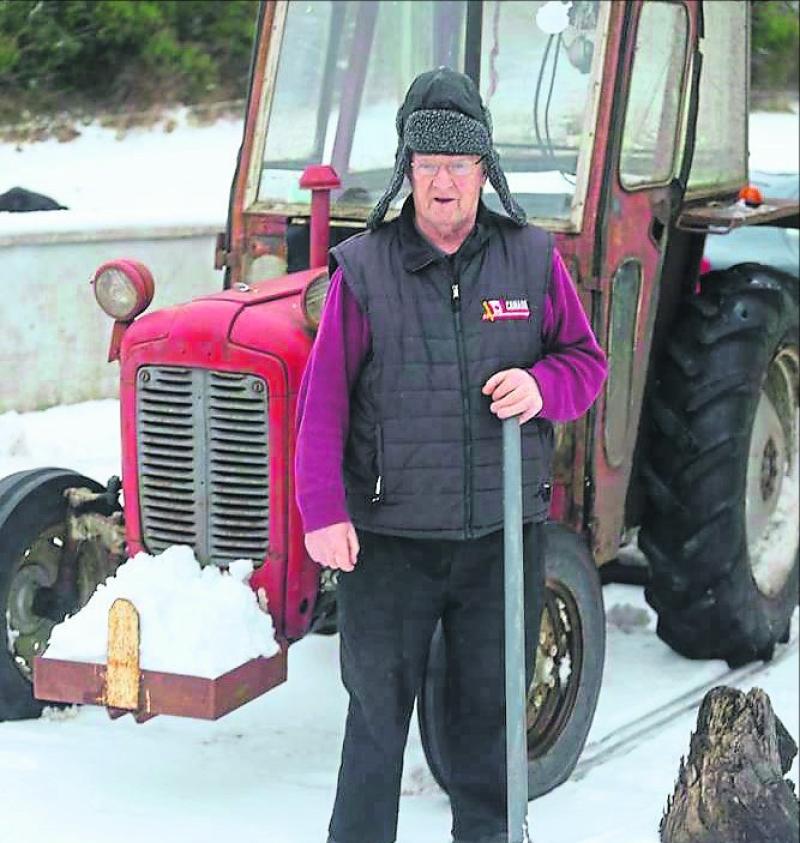 Bernie Rowley was on his way to help a friend out when Humans of Longford caught up with him on Saturday afternoon.

The Storm had passed and what came next was the big clean-up, which saw farmers nationwide - including Bernie - using their tractors and diggers to help snowed-in neighbours.

“Robert up in Corboy rang to see if I'd help move a snow drift so he could get his car out... so that's what I was at... shifting snow with the transport box.... hardy work on a hardy day,” said 82-year-old Bernie, as he stood next to his reliable old tractor, which he said was half his own age.

“Once the tractor and myself start in the morning, I have no complaints,” he said.

At the age of 82, it comes as no surprise that Bernie can clearly remember the Big Snow of 1947. He was a young boy of 11 at the time.

“We had stirabout for the breakfast and we headed off with a cut of bread for lunch time but most days, we had it eaten before that... and we carried a sod of turf (if we had any to spare) under each arm for the fire in the school,” he recalled.

“There was six or seven foot of snow but we walked every day.”

When Bernie got home from school, there was a basket of praties ready for eating - sometimes with a bit of bacon.

“There were 10 of us children and my mother used to make five soda cakes a day... the big bag of flour'd be in the corner...

“She was a mighty woman... she'd go to Drumlish on a jennet and cart for the messages... she'd have the paraffin for the lamps hanging off the axle so that it wouldn't spill on the flour.”

Back during the Big Snow, Bernie recalled using candles and paraffin lamps for light, as it wasn't until five or six years later that they had electricity in the area.

In fact, he remembered going to Drumlish for the Switch On Dance.

Anyway, he continued, after eating the praties, they'd go out to the haggard and cut out some hay from the reek.

“During the summer, half the parish would have helped build it,” he explained.

“You'd lay out a rope and double it and put the hay on the rope and then - and there was a knack to it - you'd swing your rope of hay up on your back and head off through the snow to feed the bullocks...

“Those days, the cows'd be inside but the bullocks'd be out... and if you weren't nifty on your feet you'd get a puck from a hungry bullock...

“After a few days, we got crafty and we'd throw out some hay to pacify them but if we were caught, we'd be killed...,” he said.

With that, Bernie had to say his goodbyes. The dinner was on the table and there was plenty more work to be done afterwards.

“I have to go now,” he said, after posing for his photo.

“Her good self is calling me in... and I can guarantee it's not praties and soda bread... there's still some mighty women in Ireland...

“I'm a lucky man... she keeps me going," he concluded, before heading off into the snow.

Humans of Longford is a fantastic Facebook page, curated by Tiernan Dolan, on which you can read the stories of many colourful and interesting characters from around the county.

Find the page at @HumansofLongford.