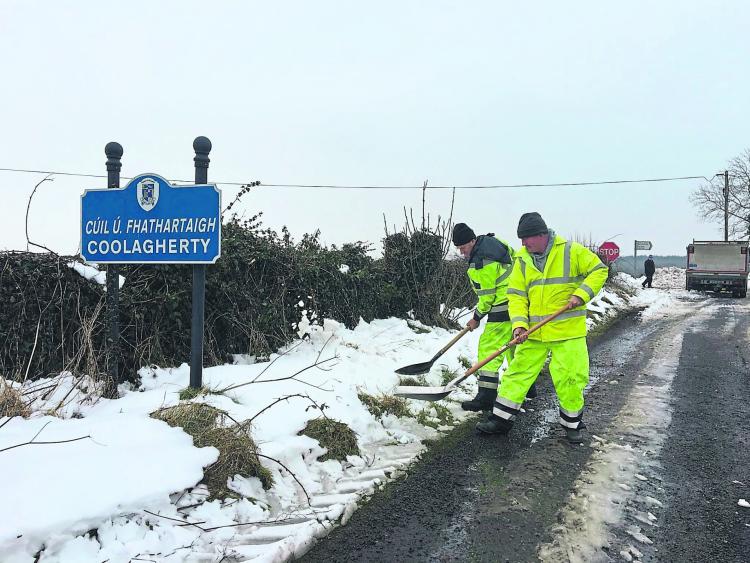 With a Status Red snow and ice warning in effect in Co Longford for two days last week, water supplies in many areas were in short supply.

Large parts of the county were also subjected to water restrictions which began in earnest last Saturday.

The areas mainly affected by this restriction included Newtownforbes, Clondra, Granard town and surrounding areas, Ballinamuck and Drumlish, and between Lettergunnell and Gelsha in north Longford.

Water mains also burst in Killoe and Newtowncashel leaving residents without water for a number of days.

The water was restored in Newtowncashel within 24 hours, despite the fact that concerns were raised over the length of time it could take Irish Water to fix the problems.

Meanwhile, back in Killoe, it took a couple of days to restore water after supply was lost in Ennybegs, Aghaboy, Clontumpher, Esker South, Corneddan and Drumnacooha last Friday due to a burst mains on the line from Mallon Forge to Ennybegs as far as Bundoon Cross.

Irish Water advised customers throughout the weekend to conserve water where possible.

In the statement, the company added; “because of extremely cold weather conditions and exceptionally high water demand, some water treatment plants in Co Longford are struggling to keep up with supply demands”.

And so it was, as a direct result of that, water restrictions were subsequently put in place.
“Customers are being asked to conserve water to avoid reservoirs emptying and water pressure to homes and businesses being affected,” a spokesperson continued.

“Irish Water customers in Co Longford are also being asked to check vacant properties for leaks and to please repair them as soon as possible as they are having an impact on the available water in the public network.”

Irish Water customers were also asked to check for leaks on water troughs for animals and carry out any necessary repairs as soon as it was safe to do so.

“Customers throughout Longford are urged to conserve water by not running taps unnecessarily, taking showers instead of baths and to refrain from using dishwashers and washing machines,” Irish Water concluded.

Water restrictions in place overnight have been removed