Remembering the big freeze of 1982 in Longford 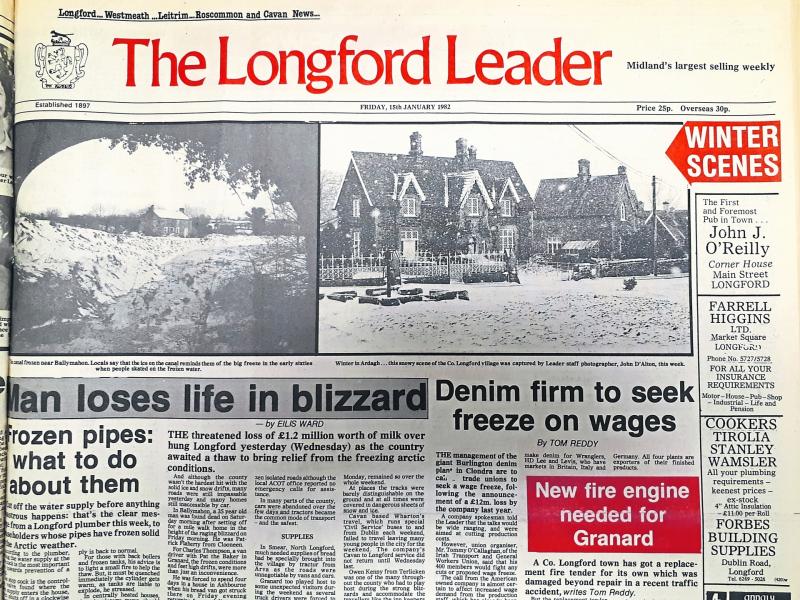 The front page of the Longford Leader on Friday, January 15, 1982

Following the havoc wreaked by the Beast from the East and Storm Emma in Longford and all over the country this past week, we take a look back at the ‘Big Freeze’ of 1982 and how it impacted us all.

This is the story that appeared on the front page of the Longford Leader, edition Friday, January 15, 1982;

“The threatened loss of £1.2 million worth of milk overhung Longford as the country awaited a thaw to bring relief from the freezing arctic conditions.

And although the country wasn't the hardest hit with the solid ice and snow drifts, many roads were still impassable yesterday and many homes still inaccessible by car.

In Ballymahon, a 53 year old man was found dead on Saturday morning after setting off for a mile walk home in the height of the raging blizzard on Friday morning. He was Patrick Flaherty from Clooneen.

For Charles Thompson, a van driver with Pat the Baker in Granard, the frozen conditions and feet high drifts, were more than just an inconvenience.

He was forced to spend four days in a house in Ashbourne when his bread van got stuck there on Friday evening returning from a delivery.

Mr Thompson, who is from Finea, could not get a message out to his wife and family and there were many fears for his safety.

The roads out of the Meath town were cleared on Sunday night and he finally arrived home on Monday last, just before midnight.

The worst hit were the farmers who faced a loss of cattle along with a loss of milk which couldn't be collected by the creamery vans.

Deliveries of grain and meal were also prevented by the frozen isolated roads although the local ACOT office reported no emergency calls for assistance.

In many parts of the county, cars were abandoned over the few days and tractors became the common mode of transport – and the safest.

In Smear, North Longford much needed supplies of bread had been specially brought in to the village by tractor from Arva as the roads were un-negotiable by vans and cars.

Granard too played host to some unexpected visitors during the weekend as several truck drivers were forced to end their journeys in the town and find accommodation.

The drifts were particularly bad outside Granard and many of the roads weren't cleared until Sunday.

From Saturday morning, right up until yesterday, County Council road crews were sanding roads throughout the county. And according to County Manager, Michael Killeen, the authority was swamped with offers of help from owners of mechanical diggers, to clear the roads of deep snow drifts.

Public transport practically shut down in Longford over the weekend with all buses and trains grinding to a halt on Friday evening.

Local bus services were back to normal by Wednesday although C.I.E. was still running a skeleton train service because of the frozen rails.

Many Longford travellers were snow bound over the weekend as public transport shut down and the roads turned into feet-deep drifts of snow and ice.

C.I.E.'s rail and bus service came to a halt on Friday evening and apart from a train run from Sligo to Mullingar on Monday, remained so over the whole weekend.

At places the tracks were barely distinguishable on the ground and at all times were covered in dangerous sheets of snow and ice.

Cavan based Wharton's travel, which runs special 'Civil Service' buses to and from Dublin each weekend, failed to travel leaving many young people in the city for the weekend. The company's Cavan to Longford service did not return until Wednesday last.

Owen Kenny from Terlicken was one of the many throughout the county who had to play host during the strong blizzard and accommodate the travellers like the innkeepers of old.

Four cars were abandoned outside his house on Friday night, the drivers unable to negotiate the steep hill on the main road.

In Edgeworthstown also, a number of cars were left to the night while passengers and drivers 'bunked up' in local homes until the harsh weather died down.”