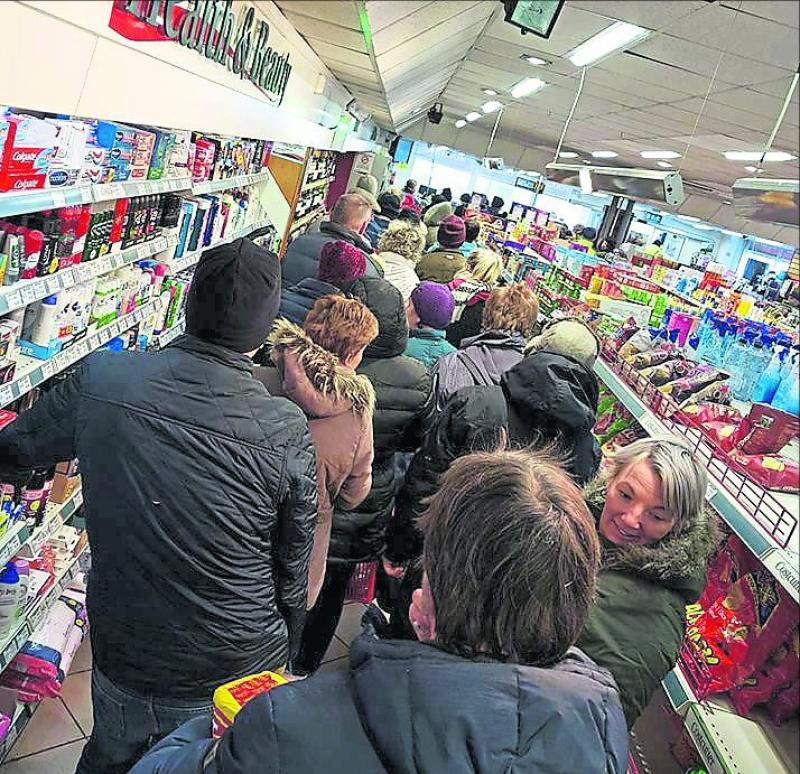 The bruising fallout from Storm Emma brought with it a pressure filled few days for shop owners and retailers across Longford as they faced an uphill battle to keep pace with an unrelenting surge in consumer demand levels.

By the time the full force of the Siberian snow covered the Longford landscape, scores of grocery stores across the county were forced into replenishing supply levels amid fears many parts of the county could be effectively cut off.

Those demands allied to the deteriorating conditions even went as far as hindering the ability of delivery drivers to travel to some of the worst affected areas of the county.

Canice Dunphy, owner of SuperValu in Granard town, told the Leader of just how arduous it was becoming to keeping stock levels sufficiently maintained.

In an online video posted on the Leader’s website during the height of the storm last Thursday, he said the difficulties facing grocery firms and shop owners were clear for all to see.

"It's unprecedented," he said.

"We are having severe problems trying to get supplies in at the moment.

Delivery people can't get to work and suppliers can't get their stock into the depots, so it's just having a knock on effect everywhere."

Mr Dunphy said, despite claims to the contrary, forecasters were not overstating the seriousness of the weather by issuing a Red Weather Alert for the entire country.

He said the same inference could also be directed at the wider public as shoppers stocked up on essential grocery items such as bread and milk in advance of Storm Emma.

"Sometimes you might say the weather forecasters are panicking a bit too much but when you look out and you see (the weather conditions) I think they have got it spot on in issuing the weather alerts," he said.

The incessant clamour for everyday items such as bread and milk was just as evident in Kane’s Costcutter in Edgeworthstown.

A startling photo taken by James Mervyn Walsh at 10.30am last Thursday summed up the growing hysteria within Longford’s consumer fraternity.

If the storm caused increased uncertainty within the local retail sector, the immediate aftermath threw up a completely different set of dilemmas.

The withdrawal of the Status Red weather alert warnings on Friday evening caused large swathes of panic stricken shoppers to descend on supermarkets across the county.

Hundreds of people flocked to Dunnes Stores in Longford this Saturday to stock up on essentials as the shop reopened for the first time since Storm Emma.

Large queues gathered outside Dunnes Stores on the Dublin Road to stock up on bread, milk and other staple essentials, prompting catch tweets such as #armabreadon to take hold.