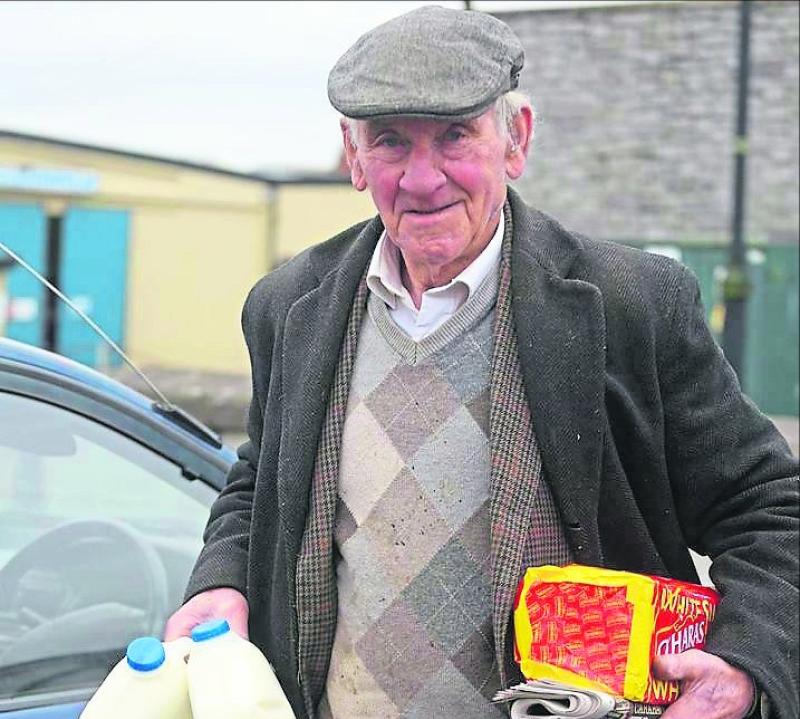 Stocking up on the essentials: Jack Shaughnessy outside his local SuperValu ahead of the stormy weather last week. Photo Tiernan Dolan

Hearts were melting all over Longford and the nation last week when Humans of Longford shared Jack Shaughnessy's story on its Facebook page, curated by Tiernan Dolan.

Jack, a character if ever there was one, was happy to stop and chat on his way out of his local Supervalu shop, where he was stocking up on bread and milk - not to mention his favourite paper - before the bad weather hit.

"They're calling this one the Beast of the East but we all hope it'll stay in the east...the winter has been long enough around Longford...,” he said, before recalling previous years of snow in his lifetime.

“God, I'll never forget that one... no one who lived through it could ever forget it,” he said.

“I remember well, we were at the fair in Mohill, it was a special fair called Monahan Day, it was 25th February 1947.

“Anyway, we bought a good deal of cattle and of course we had to walk them home,” Jack explained.

“And it started to snow and snow and snow... it just kept on snowing and then there was a black wind from the east that'd cut you....,” he said, before pointing out that the wind last week was coming from the same direction.

“Can you just imagine walking a herd of bullocks in the driving snow? They were up to their knees... ploughing and trudging and the snow falling thick and fast.

“It covered ditches and drains and at times it was hard to make out where you were.”

Jack walked those cattle from Mohill to Lettergunnel in Esker back in 1947, and noted that young farmers today probably wouldn't believe it.

“It was cruel cold... I remember well a neighbour had big horned cattle... there was a lot of them too... they all took shelter in a dry drain... it was covered with briars...

“I suppose they thought they were warm and safe but the blizzard just covered up the whole lot... not a single beast of them survived... they all died, terrible, terrible...

“The blizzard was the worst of all. You had gale force winds driving the snow and this is no exaggeration, there were snow drifts as high as houses.

“Some people say that the snow stayed till the May of '47 but I definitely remember snow at the back of the quicks up Cairn Hill in June of '47.”

After telling his story, Jack was happy to pose for a photo (right) that was posted on the Humans of Longford Facebook page, before heading on home with his messages.

“It's getting cold... good luck and keep the fire on..." were his parting words.

Humans of Longford is a Facebook page, which introduces social media-users to some of the great personalities that live in County Longford.