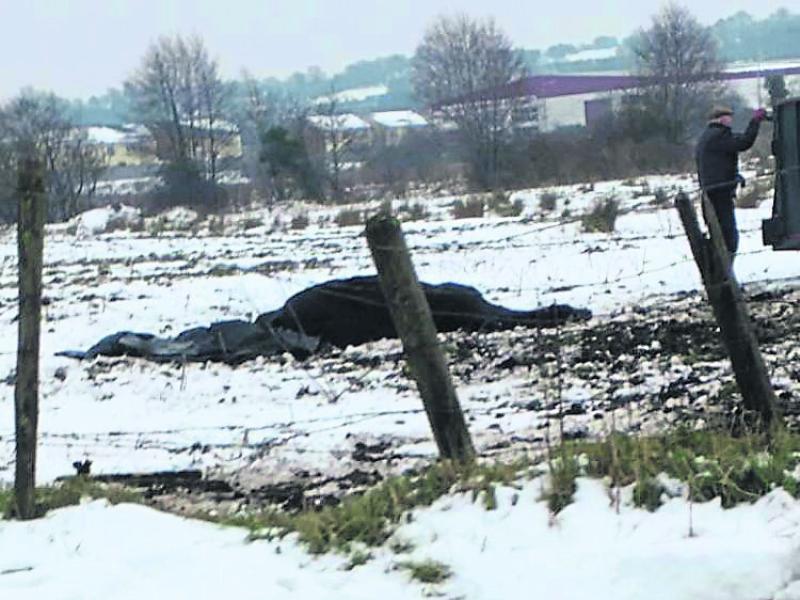 A horse was found dead in a field outside Longford town at the weekend. Photo: Lorna Foster

The 16-year-old horse that was found dead in a field outside Longford town at the weekend did not die from neglect, the Leader can reveal.

The animal actually died from colic as a result of overeating, Hilary Robinson of Hungry Horse Outside confirmed earlier this week.

And, the overfed horse had befriended many people in Co Longford over the past two years as she and another grey mare grazed together in the field along the Athlone Road on the outskirts of the town.

As a result, kind people were feeding the animals bread, vegetables and scraps, but it was this act of kindness that ultimately led to the horse’s demise.

“It was the goodwill of people that killed the horse,” Ms Robinson said, before pointing out that when the animal was taken to the knacker’s yard and examined, its intestine contained large amounts of bread.

“People were genuinely being kind giving the horse scraps and bread, but unfortunately horses will keep eating whatever they get, so this animal overate, became ill and subsequently died.

Ms Robinson insisted the animal would not have suffered but she did indicate that if people believe an animal is being neglected or mistreated, they should take a photo; time and date it and send it to Hungry Horse Outside which is based in Newtownforbes.

Once the organisation has the details, staff can deal with the matter from there.
Feeding the animal is not the answer, she added.

“I have seen far worse cases than this to be honest with you; the owner of the horse here in Longford took care of the animals and is very upset over what happened,” Ms Robinson continued.

“There were a lot of comments made on social media over the weekend in relation to this horse’s death that were very, very hurtful.

“I have seen genuine cases of neglect when it comes to horses; I went to a place in Limerick only last week and it was unbelievable - it was a graveyard of horses.

“In Longford we are very aware of animals that need care and attention, and the two horses on the Athlone Road were not neglected or ill treated by their owner.

“We were in no way concerned about them.

“Most horses can withstand harsh weather - they will need a little forage, and while it is lovely of people to feed horses, it would be better if they made contact with Hungry Horse Outside and we will deal with any issues that arise.”