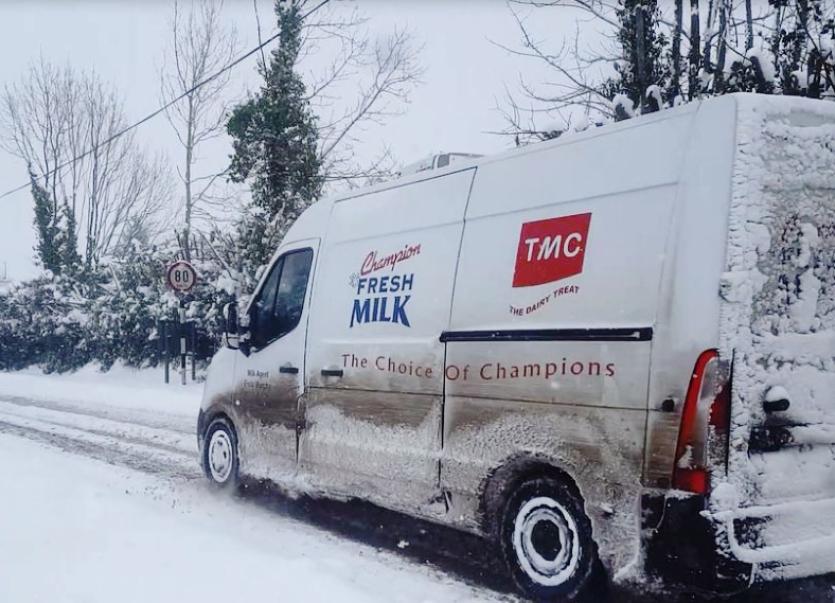 Enda Murphy's milk van out on its rounds yesterday

A local milkman, who risked the roads yesterday to deliver milk to his usual customers before the blizzard struck, is planning to head out again this afternoon.

Dedicated Enda Murphy spoke to the Longford Leader earlier today and was steadfast in his decision to go out again and deliver milk to houses he didn't get to yesterday.

"I have shops along that route that I've been dealing with a long time that were out of milk, and houses with a few old people that would be relying on me to call," Enda explained.

"I tried to get to them, you know, some people that would be living alone. But I didn't get to everyone I wanted to get to. The roads were too bad. I had to admit defeat around 3 o'clock."

And he was right too, as the national curfew was 4pm in anticipation of Storm Emma and the blizzard conditions she would bring.

Driving a milk van around the roads proved quite difficult at times yesterday, according to Enda, who found himself in a couple of sticky situations.

"The main roads were passable, but on the back roads there were unbelievable snow drifts in places. I got stuck twice and I had to get a tractor to pull me out twice," he said, commending the local farmers for the work they're doing on the roads during the bad weather.

"It was just unbelievable. It's the worst weather I've experienced in 18 or 19 years anyway," he added.

But, despite the difficulties he knows he could face this afternoon, Enda is determined to make deliveries to elderly customers and shops that need his help.

"I'm hoping to hit the road this afternoon; there's a bit of a thaw on at the moment. I promised a few people I'd try and get out to them this evening because there are shops that are reopening again," he explained.

"But at the moment, it's just not viable. But I'm hoping to get out in about two or three hours."

The adverse weather conditions are causing problems to dairy farmers all over the country, with Enda's supplier struggling to get milk from local farmers to sell.

"The biggest problem is my supply lorry that's bringing me milk won't get to me," he said.

"And Monaghan Dairies are having problem getting milk in from the farmers. It's a knock-on effect. The farmers are milking the cows, but they're up lanes and byroads and the milk lorries can't get out to them to get the fresh milk.

"And then they can't get to me and I haven't milk to get out," he added, expressing concern that there could be a milk shortage on the cards next week.

For now, though, anyone along Enda's usual milk route shouldn't worry about using up that last drop in their tea, because this champion of a milkman is on his way.

As for the rest of us... we might have to ration it.

Video: Ballymahon man goes for a stroll in the snow... wearing shorts!