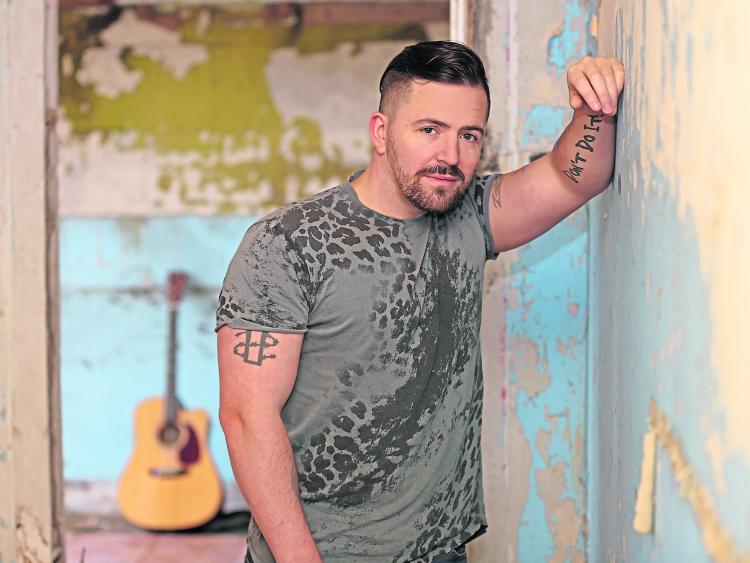 Ireland has come a long way in terms of mental health and suicide prevention facilities. But according to Longford musician, Charles James Walker, we still have a long way to go.

The Edgeworthstown man recently released his debut single, 'Get In', a powerful song with an accompanying music video that deals with mental health struggles, alcoholism, depression and attempting suicide.

But Charles is not only addressing a stigma with this powerful single; he's recalling his own experience with mental illness and suicidal tendancies.

“I was diagnosed with a personality disorder just last year,” Charles told the Longford Leader recently.

“Essentially, I have problems dealing with stress in general and I tried to deal with that right throughout my adult life, with the coping mechanisms that are thrown at us in modern society… you know, drink a little bit more than usual; drugs done on the quiet,” he said.

“I guess I knew that there was something bigger and something deeper wrong. The job that I was doing was killing me and my marriage wasn’t working. And I was dying. I’d had 11 overdoses and I decided I had to run.”

Travel was the temporary solution for Charles, who split up with his partner and left his entire life behind to go and see the world.

“At that stage, I was pretty sure I was going to die anyway so I thought ‘what’s the one thing you want to do before you die?’ I wanted to hit the road. So I hit the road.

“I met a girl and I started to enjoy life again. That was new. I didn’t know what happiness was anymore and then it was here,” he said.

But, lured into a false sense of security, he started drinking again and things started to go downhill.

“I guess I thought I was okay, so I started to do it again,” he explained. But he was far from okay.

“I realised that I wasn’t really dealing with problems at all. I’d replaced the Monday - and every day - of life with excitement.

“Long story short, I split up with the girl and I just… I collapsed…”

And things only got worse from there, as Charles started to contemplate suicide.

“I realised I didn’t have the coping mechanisms to deal with the basics of stress. And I didn’t think I was ever going to have that.

“I decided I was going to kill myself in Thailand. I remember lying in the bed, looking out the window and thinking ‘that building there’.”

Fortunately, Charles decided to seek comfort in some friends back home, who convinced him to return to Ireland.

But the drinking continued and the suicidal thoughts remained until Charles decided, again, that he would take his own life.

“The song ('Get In') is about what happened that day,” he explained.

“I woke up that morning, waited for my friend to go to work, went down the stairs. I had a knife picked out in my head already. I brought it upstairs, sat on the bed, looked in the mirror, went for it.

“I stabbed the mattress to see how much pressure it needed. It wouldn’t go in.

“I just started crying then. I had a bottle of bacardi and a bottle of valium and I threw them into me to see if I could get some courage. And I started daydreaming. I woke up later that day,” he recalled.

He woke up from his twelfth overdose to the see the face of a loved one staring at him in horror and that was when things started to change.

“It just seemed like there was something else - something I’m supposed to do, because I can’t f*cking die at the minute.
“That day I decided ‘okay, I’m not going to die’. Next decision, how am I going to live?”

So Charles started working towards getting better.

Using his own experiences as inspiration, he wrote his debut single, 'Get In', and started working on an EP, while also getting into a routine to improve his mental health.

“I had learned little things when I was travelling; getting into daily routines; getting up in the morning and watching law of attraction videos on YouTube. It really does work. It’s positive thinking; positive actions.

“I started doing Yoga in the mornings; eating healthy food, because food is the fuel for your body. I cut out alcohol and, with the exception of coffee, all mind-altering drugs.

“I was focusing on happier, more positive things; setting a goal in place of something I wanted to go off and achieve; and just working on these things kept me busy.

“In doing those things, I started getting feelings of accomplishment again; of self-worth. I didn’t have the negative opinion inside my head.”

Over time, Charles' mind started to heal but, with the release of 'Get In' coming up, he found himself getting back into his previous mindset so that he could work on the video for the song.

The video, produced by Erik Thomsen, is a reenactment of that dark day - something which Charles admitted was extremely difficult for him.

“We were going to record the EP at my dad’s house and I had decided beforehand that I was going to go back into that headspace for a few days.

“So I just sat on my own in the house, drinking, to put myself literally, physically and mentally back into that negative place.

In fact, the pair were setting up memories, bringing Charles right back to the day he tried to take his life.

“Everything that was picked out was all pre-selection. Nothing was by accident.

“But we shot it all in a day. It was a dark day and honestly, Erik stayed in that headspace for over a month.

“That fella is going to win awards. He was sitting up until five or six in the morning working on effects for the video and stuff.

“He just lived there in that headspace for about five weeks,” said Charles.

Naturally, there was some apprehension when Charles was putting his story out for the world to see.

And, with such a stigma attached to mental health in the midlands and across the nation, it's understandable that he was nervous.

“It was so naked,” he explained.

“But we decided to throw everything else away - all of the concepts that it might have been. It had to be exactly as it was that day, holding nothing back.”

The feedback Charles got for his debut single was incredible.

The song itself addresses the stigma attached to suicide and mental health issues in Ireland and, after its release, Charles found himself inundated with messages from people with whom the song resonated.

“Especially in the run-up to Christmas, there were a couple of messages week… which for a small region...,” he drifted off briefly.

“It’s big for this part of the world because nobody talks about it.

“Everybody knows somebody who's done it. It’s somewhere in everybody’s family, but nobody talks about it.”

In 2016, there were 399 suicides in Ireland. A whopping 80% of those lives lost were men, proving that it's harder for men to talk about their mental health issues.

“I think there is even more of a stigma here in the midlands,” Charles continued.

“Would you blame somebody for having a broken arm? No.

“You’re not really entitled to the same respect as other people.

“Certainly if you get diagnosed with something, you’re one of the lucky ones because you know what it is that’s wrong. But telling people about it?” He shook his head.

Things are certainly getting better, Charles added, but there's a very long way to go in the midlands - especially when it comes to addiction services.

“Which is worse,” Charles asked, “the gambler, the heroin addict or the alcoholic?

“None of them,” he answered.

“Addiction is the problem. And what is addiction? It’s trying to replace something that you don’t have.

“And that’s generally a connection, or the fact that you don’t know how to be happy anymore. It could be stemming from any one of a number of different mental illnesses.

“Addiction, I think, is a major thing in the midlands. I think it comes from depression and can cause depression. And I think it’s ignored. And I don’t think there are enough facilities here to deal with it or enough people to care about it.”

Social stigma is still killing too many people in Ireland, who are afraid to talk about their issues and afraid to ask for the help that they so badly need.

“Mental health in the midlands still has a long way to go,” Charles explained.