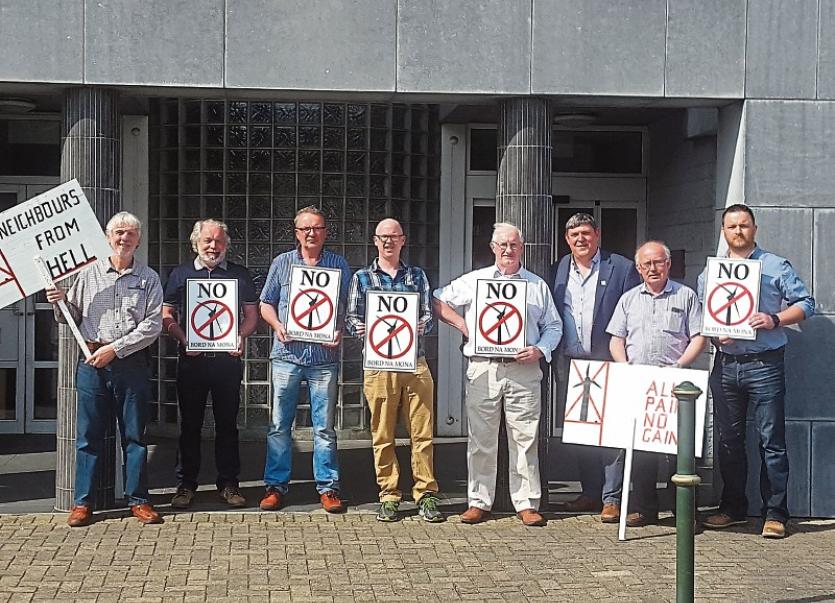 Bord na Móna will commit rural “genocide” if newly revised plans for a proposed wind farm in south Longford is allowed to go ahead.

That was the stinging prognosis delivered by main opposition body, the ‘No To Derryadd Wind Farm’ group after local politicians were informed of the semi state’s amended proposals at a meeting at its Mount Dillon plant on Monday evening.

Among the changes include plans to reduce turbine numbers from 28 to 24 while increasing their blade tip height to 185 metres or over 600ft.

Bord na Móna revealed a “combination of constraints” had meant its design team have extend the likely distance turbines will be positioned from residential homes to 750 metres.

That, the company insists, represents, a 15 per cent increase in the setback distance in plans which are expected to be lodged with Longford County Council by June 2018.

In a statement, Bord na Móna said a community liaison officer will be tasked with calling to local households to provide residents with a copy of the revised layout.

However, leading members aligned to the ‘No to Derryadd Wind Farm’ group accused the firm of adopting a “divide and conquer” approach in a bid to ensure its plans are not derailed.

“Bord na Móna are not engaging with the local community so that’s why they have decided to go down that road,” said PRO Niall Dennigan.

He also said speculation Bord na Móna were willing to offer upwards of €800 towards the energy bills of those closest to the development was further evidence of its attempts to undermine local opposition to the project.

“They won’t meet with the community so their next stop is to divide support.”

Mr Dennigan said the continued backing from local politicians, most recently evidenced by a positive meeting the group had with OPW Minister Kevin ‘Boxer’ Moran, remained key to their efforts in thwarting the multi-million euro development.

Asked about what impact the revised layout would have on the area and county as a whole, Mr Dennigan said the long term repercussions were unimaginable.

“It will put the county back ten steps,” he said.

“There’s great things happening at the minute with Center Parcs and others but it will all be for nothing if it goes ahead.”

“It’s actually criminal what they (Bord na Móna) are doing. In fact, what they are doing is they are committing genocide to the local area.

“But this is only phase one. They will be in every parish in the county if it goes ahead. Maybe not Bord na Móna but a precedent will be set to build these monstrosities 185 metres high.”

Directing his wrath at the Government and in particular Mr Murphy, Cllr Casey said: “This is once again a case of Dublin politicians making decisions in Longford.

“He (Mr Murphy) doesn’t even know where Longford is, nor does he care.

“It’s a regressive step for Longford and is nothing short of bordering on the ridiculous.”