‘It’s a bit like conquering the world, in a small, gentle way’ 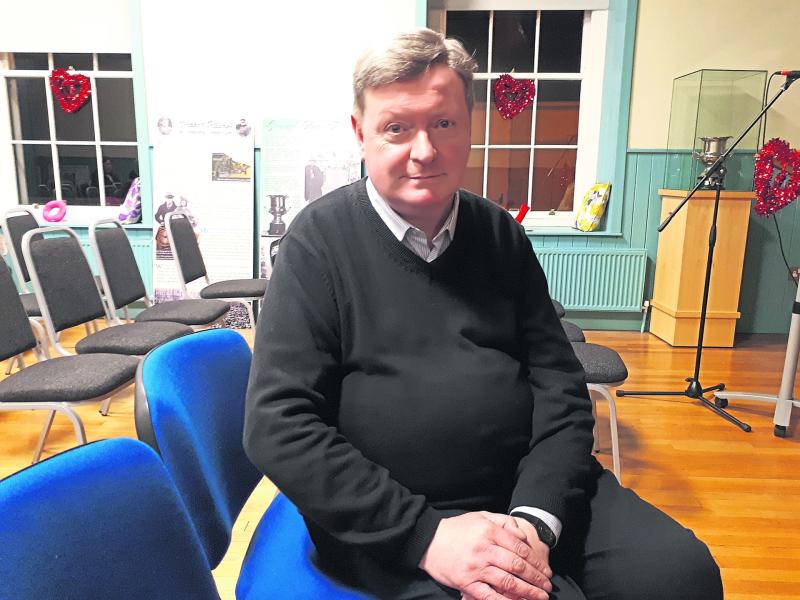 Longford man, Paul Marsden is an occupational and organisational psychologist who works in private practice.

He uses mindfulness to help people cope with and survive workplace bullying and encourages mindful behaviour in the most basic, yet most simple ways that benefit human nature.

His life experience to date, has brought him into contact with numerous human behaviours and he has gone onto further education emerging with an honours graduate in psychology and at postgraduate level from Dublin City University (DCU).

Paul conducts training for a variety of organisations in Ireland and the UK in such areas as team building, understanding stress, building resilience and dealing with difficult personalities at work.

Over the past few months, and right here in Longford, he has been faciliating four week courses in mindfulness ‘Minding Yourself 2018’ with the most recent programme just concluded at Granard Library.

He says that he draws on his own life experience in the work that he does now.

“Now I am a workplace psychologist and I go to workplaces all the time where I deal with stress - in areas where teamwork has broken down and people are perhaps not talking to one another as a result,” he adds.

The local man admits that while it is a negative setting to be present in, his approach to the difficulties has brought some very effective problem solving skills to the fore.

He also points to self awareness and the importance of people realising their reactions to difficult people or situations.

“Once we are aware of how we operate, we are able to build better relationships and teams,” he continues, as he calls to mind some of the places he has worked over the years.

“I’m in companies all over the UK and Ireland, and I must admit, that I love that kind of work, and the mindfulness that I am doing now grew out of work that I was doing with Mary Carleton Reynolds in Longford Library.

“We decided one day to do something called ‘Minding Yourself’ - a four week course that we would pilot and see what would happen.

The results, he smiles, “were astonishing”.

He says that for him the courses induced basic mental health awareness, one on one stuff, but people were hungry for it - they just wanted more and more.

“We covered areas like sleep, anxiety, worry and looked at things that stop sleep, etc.

“It’s a very practical way of coping and people love it.”

Paul says that while theory is all fine and well, and there is need for a little of it, the practical elements of coping and relaxing are far more attractive to people.

“When people come to the courses that I do, they will be able to take away something that they can use straight away,” he continues.

“In fact they are telling me here in Granard that they have done a lot of work around sleeping and getting a better night’s sleep - and it’s working for them!”

Born and reared in Longford town, Paul left St Mel’s College in 1977 and entered the priesthood where he remained for seven years.

He then left and trained as a psychiatric nurse in St John of God’s Stillorgan and later as a general nurse at St Michael’s in Dun Laoghaire.

During that time, he encountered, as he says himself “an amazing woman”.

She was a psychologist who took Paul along with a small group of other nurses under her wing and began providing them with practical solutions to patients’ pain and suffering, whether it was emotional or physical.

“I loved it and realised that was what I wanted to do; helping people directly really appealed to me at that time,” recalls Paul, reminiscing.

“I still meet that woman at conferences and I always remind her that she is the reason I am doing what I do now.”

Mindfulness is a minefield, he laughs, thinking back on the many life experiences he has drawn on to get to this point in his own existence.

“I suppose it has to be broken down so that people can understand how it works and how to follow it every day.

“There are such simple small exercises that you can do just to pull yourself back into the now; focusing on the breath and breathing in and breathing out, is just one such example.

“Doing this over the course of the day has very, very beneficial effects on the person, and of course if people want to delve more into it, there are lots of courses they can do.

“It’s very practical, instant, here and now stuff that I do with people.”

Paul Marden also does a lot of work with people on the front line of their professions, in particular nurses, doctors, managers etc.

He says its vital that people in that line of work are able to take time during their busy work day, to step away from the grind, even if just for a minute or two to engage in mindful behaviour.

And, it was Paul’s work in the corporate world that led him to the particular path he is on now.

The Longford man first started out working in companies like Irish Rail, Coca Cola, and then one day, he smiles, and quite by accident, he got chatting to Mary Reynolds down in Longford Library.

What began as a pilot project in the art of mindfulness has now grown wings and Paul and his skills are in high demand the length and breath of the country.

This week, for example, he is heading down to Ballina to facilitate the four week ‘Mind Yourself’ course there.

He doesn’t advertise his work, it comes to him - through word of mouth.

“To be honest with you, it has kinda grown feet and I am really enjoying it,” he adds. “Earlier today I spoke to a retirement group in Longford and it was a great experience.

“It’s a bit like conquering the world, in a small, gentle way.”

And indeed, taking a gentle step back and delving a little into the corporate world that Paul predominantly works in - workplace bullying is one of the major difficulties that he faces into every day.

He says bullying involves many elements including intimidation, undermining, power and control.

“It is a very dysfunctional scenario in any organisation,” he adds, before pointing to the fact that he gets calls from workers across the country four or five times a week endeavouring to seek his assistance in coping with such difficulties.

“People often find it very difficult to understand the dynamic they find themselves in when they are being bullied and they think they are going mad.

“Where I come in, is to help people separate what is happening to them from the person they are, and to understand they have been drawn into this and they can find ways to unravel it, and then cope with it.”

Paul says there is a common misconception out there that bullying is something that only children engage in, but, no, he continues, “adults engage in bullying too”.

“What happens could be a small thing, but it is the everyday nature of it that wears a person down gradually.”

Paul says his job is to look into these situations, look at what is happening and help the person being bullied to steal themselves away from the attacks coming at them.

There are different types of bullies too, he adds.

“Some are devious while others bully out of an inability to cope with stress.

“There is a huge overlap now between the bullying personality and the narcissist personality - that’s a very self focused person who doesn’t really care about anyone else and very often has zero empathy for another human being.

“They don’t care at all that the person being bullied can’t sleep at night; has no quality of life, can’t eat - they just don’t care - once they can control, belittle or have some kind of a handle on the person, that is all they care about.

“People like that will never say sorry either because they will never reflect back on their behaviour.”

He also points to the feelings of dread that people who are being bullied experience.

“I hear this from people quite a lot; a feeling of hating going to work the next day, having a lump in the stomach, butterflies, etc.

“They just dread going in to work and they could experience that every night, or perhaps every week - worrying about whether or not they will be attacked when they return to their workplace.

“That can really wear people out after a while.”

Paul also says that, in the majority of cases, the people being bullied are very nice people and people whom everyone enjoys being around.

“They are often very talented people, amazing communicators and doing a very good job, and all of that somehow makes somebody else very envious of them,” he continues.

“I see this repeated over and over again; when I go into a place I can see exactly what is going on and so I set about trying to untangle that.

“But everyone has to be on board for change to occur, it can’t just be down to one person.”

Chatting away to the Leader from Granard Library, Paul adds that even in group settings, in which he is facilitating, people engage in bullying behaviour towards him at times.

“They will stare at me, or maybe start grumbling - all sorts of funny things; what I do is I use that behaviour in my work,” he smiles.

The local psychologist also points to the fact that there is still a lot of work to be done with workplace bullying and admits there are still many companies who “won’t let me inside the door”.

“There are awful things happening,” he adds.

“But, people like me aren’t going to go away.”