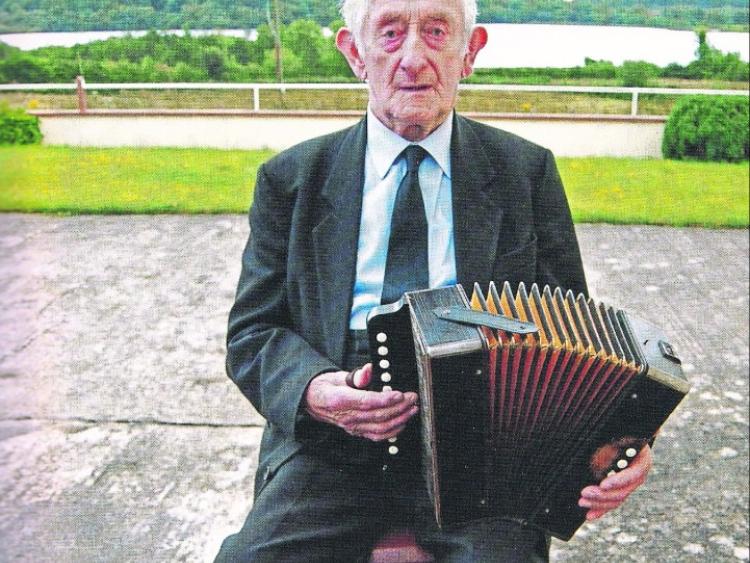 Frank was born on January 30, 1918 and, before that year was out, his father died from the great flu that is said to have caused the deaths of between 50-100 million people worldwide.

The tragic death of his father on December 5, 1918 left his mother a widow before her nineteenth birthday.

When Frank started school, his mother went to work in Howth, Co Dublin and he was reared by his grandmother.

He was surely one of the very last people who could remember seeing the Black and Tans. He could recall Tans coming into the room where he was in bed, probably in 1921.

He remembered a Blueshirt meeting at Rathmore Cross and he also could talk about the reconstruction of Colmcille Church in 1932-34.

After attending a carpentry class in the old Technical School in Rathmore in the mid 1930s, he started making wardrobes and selling them.

He would travel by pony and cart to Paddy Pee Masterson’s in Abbeylara, a distance of 10 miles, to get the timber, but he had to make a separate trip to Arva on the bicycle to get the mirror glass.

This he tied between two pieces of plywood and carried on his back. Less chance of it getting broke than on the cart.

He started to learn the building trade with Mickie ‘Art’ Gormley in the 1930s and, after stints in Belfast and Dublin, he took the building of a house for ‘Long’ John Reilly in Ballinroey in 1949.

As he said himself, when this didn’t fall, others got him to build too and he became the man to get, if you wanted a house built or extended, or if you wanted to replace a thatched roof with slates or asbestos.

In those days, the one tradesman did everything. He helped dig the foundation, built the walls with blocks or mass concrete, put on the roof, plastered and hardwalled the walls, dashed the outside, put in windows and doors and everything else that had to be done.

In the early 1950s, there was no electrical or plumbing work involved at all. In 1956, the electricity came to the area but, with one exception, the first ten houses he built had no running water or toilet and there was no requirement, even for grant purposes, to put in running water.

He built each of the first three houses for £100 each. He was very proud of the houses he built, like Phil ‘Rock’ Reilly’s, Aughnacliffe; Mickie McGovern’s, Cartronmarkey; Joe Smith’s, Bunlahy; Paddy McKeon’s, Molly, and over 20 in all.

He had a great passion for what he called céilí music. He learned the button accordion himself and, in the late 1930s, he played with two different bands.

The first one was led by Jimmy and Pee Cosgrove, Dernaferst and they played in local halls; ‘Tan’ Boylans, Gowna; Murphy’s Ballyduffy; Lynch’s in Cleenrath, Lukie Martin’s and the Tech in Rathmore.

Then he joined with the Bradys from Mullinalaghta and ‘Robin’ Lynch and they had a regular Sunday night spot in Mullinalaghta Hall.

These dances were to raise funds for the new church. He used to get 5/- a night for playing at a time when you would have to work a whole day to earn 2/6 setting lea with a loy. He also played at a lot of house dances in kitchens and barns.

The Sullivan house in Aughakine was a great place for music and song and, in his latter years, there were regular sessions when different musicians would call in. When the music started, the night was never long enough for Frank and all he could think of was when the next session would be.

In 1949 he married Rosetta Shaughnessy and they went to live in a thatched house which stood along the upper Aughakine Road. There they reared five children.

In the early 1970s, Frank built a new house on the lower Aughakine Road and he lived there until after his 99th birthday.

When the legs started to fail, he reluctantly agreed to go to the Laurel Lodge Nursing Home, where he received great care for his last eight months.

Frank was still in good form until about a week before his death and the main talk was about the 100th birthday party.

The hotel was booked, the cake was baked and the invitations were printed but, alas, the flu came and the cake was eaten at his funeral instead of his birthday celebration.

After a long and happy life, he would have been pleased with the traditional wake and funeral with the main celebrant, Fr Séamus McKeon assisted by Fr Cadam, Fr O’Rourke and Fr Starkin.

Frank was a very religious man who could be found saying the Rosary to himself at any hour, either at home or in the nursing home. He was laid to rest in Colmcille Cemetery alongside his late beloved wife, Rosetta, on Wednesday, January 17, 2018.