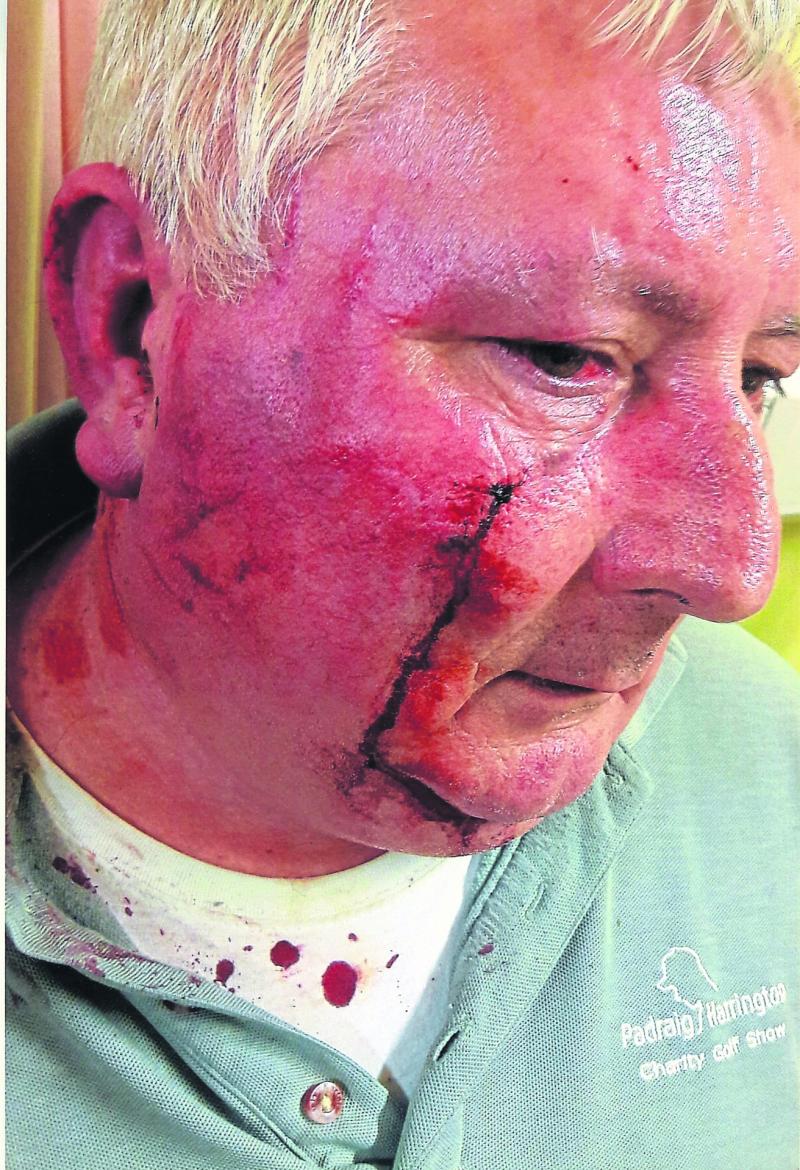 Paddy Boyle was assaulted by a man while driving his taxi on Christmas Eve 2016.

Paddy Boyle, a well known taxi driver in Longford town made the comments in the aftermath of a circuit court case, just last week, in which a man pleaded guilty to assaulting Paddy and causing him harm nearly 14 months ago.

It was Christmas Eve, December 24, 2016 and Paddy was thinking about Christmas Day with the family and contemplating knocking off earlier than usual when he answered a call to pick up a woman in Lanesboro.

“Christmas Eve, a woman rang me at 4pm to see if I was working late and I told her I was working until maximum 8pm, because I wanted to get home,” Paddy told the Leader.

“This girl wanted to get Santy toys sorted - she wanted to collect them from a house in Ballyleague and bring them to Drumlish.

“I went out to Lanesboro, picked her up and we drove to the house at Lough Ree Park, Ballyleague where she was going to collect the toys.”
Paddy noticed that the young woman had two black eyes and seemed distressed during the short journey across the River Shannon.

When they arrived at the house there was no lights on and the young woman started to cry.

“I said, 'Jesus I don’t need this now on a Christmas Eve' and I told her to go into the house and get her bits and pieces so that we could get going to Drumlish,” he continued, before pointing out that his passenger went into the house eventually, but that after 10 or 15 minutes there was still no sign of her returning.

“Next thing, out comes this fella like the hulk - the shirt all opened and making all kinds of false accusations at me,” outlined Paddy.

“Of course all of this was being recorded on the dash cam - thanks be to God.”

Paddy went on to say that the man opened the door of his taxi, grabbed the keys and threw them down the road.

“I was in the car and couldn’t get out of it; he had me pinned in,” the local taxi driver continued.

“Then he grabbed the phone kit and made bits of it; he then started roaring and balling like a young bull and he was well intoxicated I can tell you.
“He then proceeded to box the face off me.”

Paddy was stuck in the car, he couldn’t move or go anywhere and the man was climbing up the car trying to kick him in the ribs.

“I tried to block him, and all of that continued for a good ten minutes,” Paddy added.
“Then the woman next door came out and she talked him around to going to the other side of the car.

“She was a brave woman, but it gave me time to get out of the car and find my keys.

“He began then to threaten the woman but she was having none of it.
“I got my key and drove away.”

At that point Paddy rang Roscommon Gardaí but couldn’t get through so he drove into Longford town and went into the Garda Station there.

“I made my complaint and they sent me down to casualty where the staff there sent me on to the Midland Regional Hospital, Mullingar.”

The local taxi man sustained injuries to his face during the incident and made the journey to the hospital alone where he remained until 3 o’clock on Christmas morning.

Mr Munnelly was sentenced to three years in prison with the final year suspended and ordered to pay the taxi driver €25,000 in compensation.

Paddy, meanwhile, says it was the dash cam that saved him.

“When Mr Munnelly realised that the camera in my taxi had recorded everything that had happened that night, he pleaded guilty to the charges,” the taxi driver added.

“The dash cam is very important for taxi drivers; it records all the activity in the car as well as all the activity at the front and back of the car.
“It provides a vital bit of evidence, if needed, for any taxi driver that is driving around on his own.
“It was the only protection I had - I had no witnesses.”
Meanwhile, Paddy who has been driving a taxi in Longford town for the past 25 years, says that taxi drivers are subject to abuse and assaults all the time.

He also points out that there has been a rise in the type of crime he was subjected to in the last few years.
“When people get into a taxi with drink on them now, they are under the illusion that they can pay you what they like,” Paddy said, before pointing out that it was February 2017 before he got back on the road after the attack.

“The meter doesn’t matter to them.

“The Government put in the meter in the taxi - it is there for a reason.
“If taxi drivers don’t use the meter and we are stopped by a regulator, we are fined €250.”

During his time off Paddy suffered a loss of income and a loss of confidence as a direct result of the assault.

“I was a bit scared at night for a good while afterwards,” he added.
“Most of the people you meet at night are gentlemen and ladies, but there is always one that will cause trouble and that is the truth.”