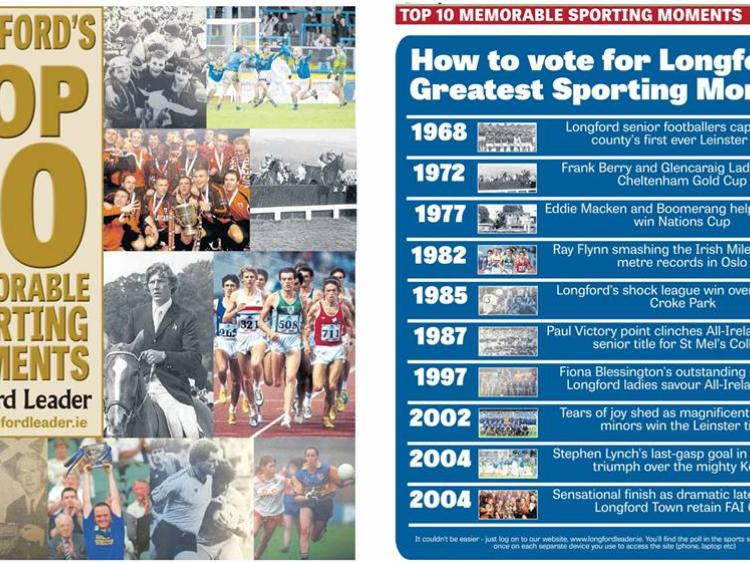 Time is running out to vote for Longford's Greatest Sporting Moment!

There has been a huge response to our search for Longford's Greatest Sporting Moment of the past fifty years and we'd like to remind you that time is running out for your chance to cast your vote!

The poll to determine Longford's Top Sporting Moment closes at 5pm on Thursday, February 8 and you can vote HERE

The shortlist of Longford's Top 10 Memorable Sporting Moments was announced in last week's Longford Leader and to read all about each of these unique sporting moments, simply click HERE

Almost 1,000 people have had their say and three leading contenders to-date are Longford's 1968 Leinster Senior Football Championship Final victory over Laois - the county's only provincial success; the magnificent triumph of Longford Town in 2004 as the struck late twice to retain the coveted FAI Cup and the Longford ladies winning the All-Ireland Junior title in 1997 at Croke Park, with Fiona Blessington's player of the match display standing out.

As with every shortlist, Longford's Top 10 Memorable Sporting Moments, generated much debate and discussion with the absence of Longford minor footballers 2010 Leinster championship victory from the top ten being lamented by some sports followers. However, the Longford minor footballers of 2002, captained by Enda Williams, are in the running for the top accolade and they need your votes.

Longford's Top 10 Memorable Sporting Moments also features three individuals that blazed a trail on the national and international stages and votes have been streaming in steadily for them.

Another favourite son of Granard, Eddie Macken, features on our list of memorable sporting moments and his triumph with Boomerang in 1977, the first of Ireland's three in-a-row of Aga Khan Nations Cup victories, is hoping to win your vote.

Longford town native Ray Flynn was a world class athlete and he made Longford folk very proud in 1982 when he smashed the Irish Mile and 1,500 metre records in Oslo.

The iconic St Mel's College is a famed gaelic football nursery and their dramatic win (0-8 to 1-4) over St Mary’s, Galway in the 1987 All-Ireland Colleges Senior Football Championship Final is also a popular choice with voters for Longford's Greatest Sporting Moment.

Denis Connerton's Longford are presently flying high in Division 3 of the Allianz National Football League, registering back-to-back victories over Offaly and Derry, and they will travel with confidence to the Athletic Grounds, Armagh on Sunday for their round three clash against Kieran McGeeney's charges.

Longford senior footballers are certainly no strangers to producing giant killing acts and two such occasions, defeating the mighty Dubs in Croke Park in the National League in 1985 and then clipping the wings of Kerry in 2004 at Pearse Park, with Stephen Lynch's last-gasp goal, also feature in Longford's Top 10 Memorable Sporting Moments.

So, before our poll to decide Longford's Top Sporting Moment closes at 5pm on Thursday, February 8, have your say HERE

The result of Longford’s Greatest Sporting Moment will be announced in the Longford Leader on Wednesday, February 14.