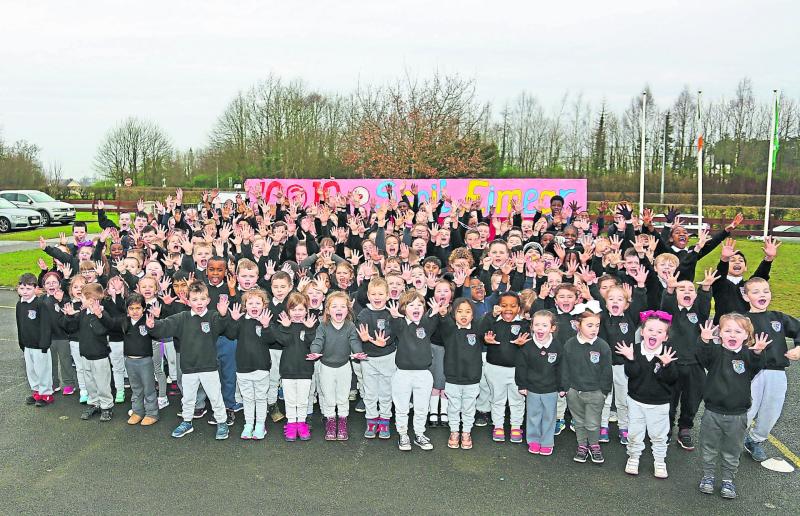 Pupils at Scoil Eimear particpating in the 10@10 in conjunction with Operation Transformation. Photos by Shelley Corcoran.

Excitment and hysteria were in rich supply among the student populace of Scoil Eimear last week as recording crews attached to RTÉ's Operation Transformation rolled into town.

On Friday last, the RTE crew landed at the school to record children as they took part in the 10@10 exercise programme, an exercise drive designed by Operation Transformation with the aim of getting children to do 10 minutes exercise at 10am every day.

All classes in Scoil Eimear are participating in the programme and if Friday’s evidence is anything to go by, they are thoroughly enjoying it.

“It’s a very simple, yet an extremely effective programme,” he said.

“The exercise videos are on RTE player/RTE Junior and all you have to do is play the video on the white board and the children copy the exercises in class.

“The children find it really fun and the exercises are modelled very well for them by the presenters. At times bad weather can prevent training or PE from taking place, so it’s a fantastic alternative for them.”

On Friday, Scoil Eimear performed a whole school 10@10 session on their playground. There was music blaring, as children and teachers participated and most importantly the children were exercising with huge smiles on their faces.

The excitement from the presence of the cameras was clear to see, he added.

“Football and soccer are probably the main sports in Ireland, however not every child plays them or likes them,” explained Kevin.

Every child can do 10@10 and enjoy it and that’s the most important part.”

From speaking to teachers, Kevin said a huge improvement has been noted among pupils both in focus and concentration in class since they began 10@10.

Kevin, is also the Event Director of parkrun in Longford and wants to bring people’s attention to it.

“We have a free 5km run or walk on our doorstep every Saturday morning for anybody who wants to take part and we have a free 2km walk or run every Sunday morning at 9:30am for juniors aged 4-14 years of age.”

The pupils from Scoil Eimear were expected to feature on last night's (Tuesday) episode of Operation Tranformation.