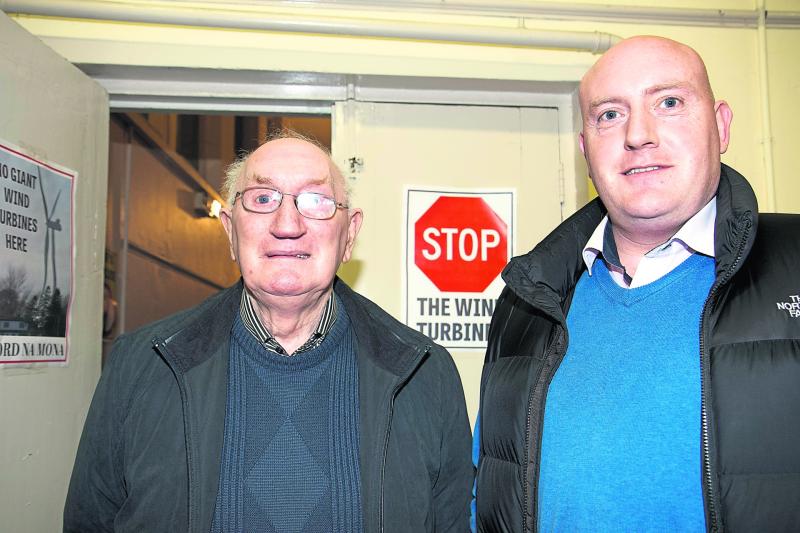 The proposed erection of 28 wind turbines in Derryadd will see a huge decrease in the value of houses in the area, a community meeting heard on Monday night.

In fact, having a wind turbine near your house could see the price of your property halved, according to No to Derryadd Wind Farm committee member Niall Dennigan.

“A number of us have carried out property and land valuations at different stages,” Mr Dennigan told those gathered at Monday night's community meeting.

“ And each estate agent has said there will be an immediate 50% drop on the value of properties and homes the minute the first wind turbine is erected. For me that’s a serious thing.”

Following a number of presentations, local man, Jimmy Whitton, recalled a family he spoke to, who lived near a wind farm in another part of the country.

“Their son built a house there in 2008 but he lost his work and he had to move to London. So he tried to sell his house,” Mr Whitton explained.

Other residences near wind farms around the country have seen families abandon them, unable to sell them, while more families have spent many years trying and failing to sell their properties.

For this reason, residents of Derryadd and the surrounding areas that will be affected have been advised to get their homes surveyed.

“I am aware that a number of homeowners have had estate agents survey their homes, and have received written reports outlining the before turbine and after turbine value of their property,” said Michael Keating, another member of the committee.

“They have forwarded a copy of this report to the relevant Bord na Mona department in Newbridge through registered post.

“The purpose of this is to prevent wind turbine developers from denying any knowledge of property valuation as a result of wind farm development.”

In fact, this was advice that was repeated several times during Monday's meeting.

“We would encourage everyone, if you can - it’s a few pound, we know - get your properties valued,” said Mr Dennigan.

“Do it now before the wind farm goes up. Get your valuation and registered post it to Bord na Mona. At least then you’ll have a footing for when the time comes.”

Meanwhile, Longford County Councillors in attendance confirmed that the council is behind the local community and will do everything in their power to fight against the construction of the 28-turbine wind farm.