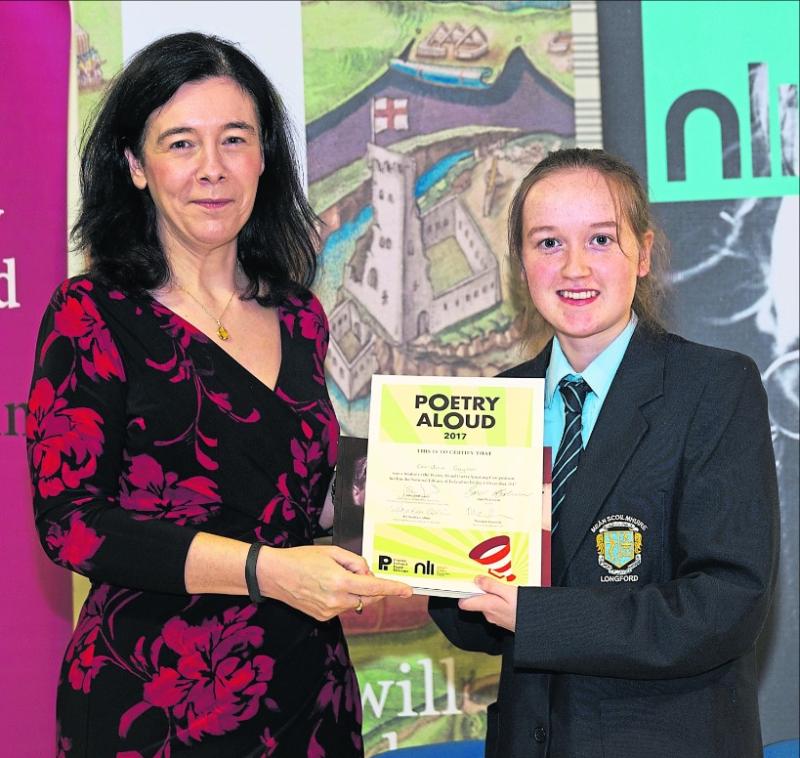 Christine Gaynor of Mean Scoil Mhuire competed in the National Final of Poetry Aloud in December. She is pictured above with Dr Sandra Collins, Director of the National Library.

December was an exciting month for fifth year Mean Scoil Mhuire student, Christine Gaynor, who took part in the final of the annual Poetry Aloud competition, organised by the National Library of Ireland (NLI) and Poetry Ireland.

The event saw 31 students from across the country compete in the junior, intermediate and senior categories for the Seamus Heaney Poetry Aloud Award.

Poetry Aloud is an annual poetry speaking competition for post-primary school students across Ireland and was launched in 2006 as Yeats Aloud, becoming Poetry Aloud in 2007.

Since then, it has grown greatly from just a few hundred entries to 1,800 entries in 2017.

The late Seamus Heaney was a significant supporter of Poetry Aloud.

In 2009, he was presented by the British Library with the David Cohen Prize for Literature.

In addition to the main award, the winner each year nominates the recipient of a subsidiary prize, and he chose Poetry Aloud.

In nominating Poetry Aloud for the award, Seamus Heaney cited the extraordinary way in which the competition seeks to celebrate the joy of speaking and listening to poetry as well as the fact that there is a strong North-South dimension to the competition.