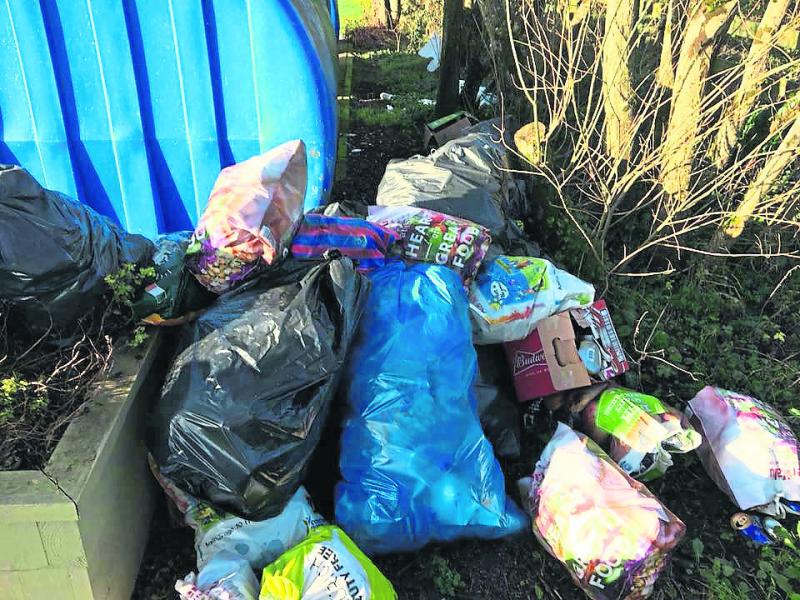 Images of some of the rubbish which was found dumped close to the Marina in Ballyleague over Christmas and the New Year.

The efforts of the local Tidy Towns group in Ballyleague were undermined over the Christmas period when rubbish was dumped close to the recycling facility in the area.

At the weekend, Ballyleague Renewal posted an image on its Facebook page of bags of rubbish that included drinks cans, packaging and plastic strewn at the facility saying, “shame on those who have dumped their rubbish at our lovely Marina since Christmas”.

The group is also examining CCTV footage from the area in an effort to establish who the culprits are and eventually call them out on their bad behaviour.

Meanwhile, Chairman Ballyleague Renewal Gerry Trimble told the Leader this week that the whole episode caused annoyance in the community.

“The dumping occurred over the Christmas period - cans and other stuff was left at the recycling bin and then it occurred again over the weekend,” he fumed, before pointing to the fact that everyone in the area was very disheartened over matters.

“We had the litter warden out on Monday morning and she examined the rubbish and the area and we are hoping that we can bring those who did this to justice.”

Like most Tidy Towns groups, Ballyleague Renewal members work daily to ensure that their community is spic and span.

Litter picks are organised weekly and regardless of how much rubbish is collected from the roadside on any given day, there is more rubbish gathered during the next pick.

“You put your heart and soul into keeping a place clean and tidy and people come along then and do this,” Mr Trimble continued.

“We do litter picks along the main roads once a week and the litter is as bad as ever when we do that.

“When you go back a week later, there is more rubbish - people throw their coffee cups out the car windows and everything.”

Mr Trimble went on to say that while Tidy Towns groups across the country “do their best” to keep their communities clean, fly tippers and rubbish dumpers continue to undermine the efforts.

“You clean up and a week later you go back and it’s as bad as ever,” he added.

“We want people to stop throwing their rubbish out the car window and when they go the recycling bank put their rubbish in the designated bins - don’t just dump it and leave it there.”