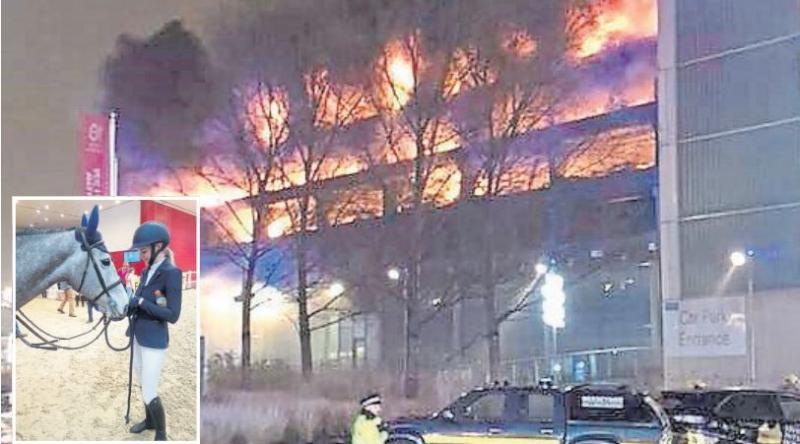 The blaze that swept through the multistorey carpark in Liverpool on New Year's Eve. Inset: Aisling Byrne and her horse at the horse show.

Local showjumper, Aisling Byrne's 2017 ended bizarrely as she found herself caught up in the frenzy caused by a huge fire that swept through a Liverpool multistorey carpark on New Year's Eve.

Aisling was taking part in in the Liverpool International Horse Show at the Echo and was finished competing for the day, having picked up a rosette in her horse's class.

It was approximately when Aisling was made aware of a small fire in the car park of the arena, where the horses were stabled.

As it was feeding time for the horses, Aisling knew that her head groom, Emma Harbourne (who is also from Longford) would be at the stables.

“I called her to see what was happening and she told me that there was a small fire on level three, but nothing to worry about because it was one car that had caught fire and the fire brigade were already there,” Aisling told the Longford Leader last week.

“Our stables were at the end of the row and the fire brigade had parked right beside there.

“One of our horses was getting unsettled because the sirens were quite loud so Emma said that she was going to move him to another stable further away from the noise but that everything else was fine.

“I started making my way to the stables to check that all was ok. A minute or two later, Emma called me back in a panic saying that hot black liquid was coming in through the vents and grids the floor and we had to get the horses out.”

It was then that Aisling, Emma, and others involved in the horse show kicked into action.

“I started to run towards them but called one of the other guys that with us as I knew he was closer,” said Aisling.

“Everyone in the stables started grabbing horses and evacuating them ASAP and they closed off the stables because it was too difficult to breathe.

“All the horses were put in either external stables or sent into the main jumping arena.

“It all happened very quickly but everyone pulled together to get all of the horses out.

“One of our horses ended up in the main ring and the other ended up in the external stables and no one was allowed into or out of the Echo Arena at that point while the fire brigade worked to contain and control the fire.”

Unfortunately, at one point, the wind changed direction, which sent smoke towards the outer stables, spurring Aisling and the others to move the animals inside to the horse lorries, where they would be safer.

“At this there was nothing further that anyone could do. All of the horses had been moved from the stables and we could only watch as the smoke billowed out of the building,” said Aisling.

“We could also hear all of the car tyres popping and engines going as the cars continued to catch fire. There were approximately 1,400 cars parked in the car park.”

The blaze broke out in the engine of an old Landrover on level three of the car park, before rapidly spreading to other vehicles and getting out of control.

The rest of the horse show was cancelled as firefighters tackled the blaze into the early hours of New Year's Day.

Six dogs were rescued from cars but nobody was seriously injured, though Merseyside Police advised the owners of the vehicles to contact their insurance companies.

“The show organisers did a great job of evacuating the horses in a calm and controlled manner,” said Aisling.

“They had a vet on hand to sedate any horses that were getting worked up from the noise of the car tyres blowing.”

The horses were evacuated from the rear of the Echo and were let out in a controlled manner, one at a time so that they were able to walk to the lorry park where they were loaded into lorries and taken to safety.

“The show organisers sent out a message to all of the riders to say that Aintree Racecourse had opened up their stables for anyone who needed them, which I thought was very quickly organised under the circumstances,” Aisling added.

“Everyone worked together to help get the animals to safety and cause the least amount of panic possible.”

The Liverpool International Horse Show is in its third year and is growing from strength to strength.

“It is an extravaganza of showjumping and entertainment,” said Aisling.

“Most performances were sold out so the atmosphere when competing there is phenomenal and a rare opportunity for riders to compete in front of such a large crowd.”

While the show had to come to a premature end, Aisling said that the way in which it was handled was extremely professional.

“I’d like to thank the show organiser Nina Barbour, her Liverpool International Show team and the Mersey Fire Brigade Service for doing such a great job in a very tough situation.

“It was so unfortunate that the show had to end prematurely... but they really couldn’t have done any more to ensure that all animals and people were evacuated safely.

“All of the competitors' tack and equipment was left behind in the building and we had accepted that it was gone for good and happy and thankful that our animals were safe and that no one was injured.

“However the following day, the Fire Brigade worked to get some tack outside, against the advice of the Engineers so they really went above and beyond for us.

“They only stopped when some of the on that floor collapsed and the building was shut down completely.

“The Liverpool International Show team continued to work tirelessly to reunite people with their tack and keep everyone updated so efficiently with progress reports.

“I hope that the show runs again next year and if so, I will definitely be there to support it as it is an extremely well run, show,” she concluded.