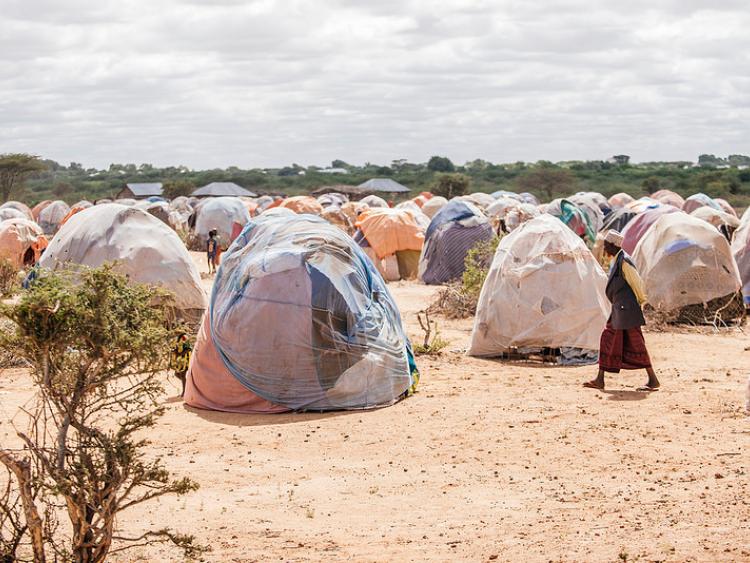 The camp that was set up in Dullow, Somalia. Many people live here now, having fled the conflict in other parts of the country

The plea comes as over 26 million people continue to face malnutrition and the threat of famine across South Sudan, Somalia, Kenya and Ethiopia due to prolonged drought.

“I have seen the difference local support from Longford has made on the ground,” said Sean, who is the head of Trócaire's international division.

“It is no exaggeration to say that they are having an immediate, practical impact on families throughout East Africa.

“Our health centres and feeding programmes are saving lives, but we need to continue our response and we need the public’s support to do that.”

Sean himself is not long back from Somalia, where he saw firsthand the effect that conflict is having on the country's people.

“We were working in a town called and we would see tens of thousands of people arriving with nothing but small bags on their backs - mostly women and children.

“We provided them with food, water, tents provided by the Irish government, and medical care.

“And we saw people coming to us in a bad state with high levels of malnutrition.

“We also saw a lot of other diseases related to hunger - particularly in those under the age of five.”

Sean is originally from Dromard and spent eight years living in different parts of Africa - including Zimbabwe.

“When we lived in Zimbabwe, Robert Mugabe was the president and I regret not being there when he was removed,” he explained.

“There were so many peaceful protests. When we lived there, it was hard to even imagine he could have been deposed - and peacefully.”

Trocaire been working with human rights in Zimbabwe for 20 years and Sean explained that this was a huge milestone for the country.

Steering the conversation back to the Christmas appeal, Sean explained that the help received by the public has made a huge difference to the lives of people in third world countries.

“Every year, we do the Christmas appeal where we ask people to make a donation and we receive a huge amount of money, which funds humanitarian work and our work,” he said.

“The Christmas appeal funds our life-saving work, by providing food and medicine and shelter and clean water, but it also funds our long-term work such as agriculture, the work we do with women and our work on human rights.”

Sean is now based in Ireland, with his wife, Irene, and his two children, Kara (7) and Luka (4), but will be working in Africa for two or three weeks per month.

But, he said, he'll be making regular visits to his home county when he's not in Africa.

“I’m originally from Dromard and the family home is still there so I’m a regular visitor to Longford.

“I think it’s really important to keep that link and I often go home to meet up with the lads I used to play football with and my family,” he said, adding that there is a huge importance on the community in his hometown.

“My dad passed away a few months ago and I was home for that and it helped so much to have the familiar community around me during that difficult time.”

Starting this month, Sean will return to Africa to carry out more life-saving work for its people.

And, he said, while Christmas may be over, the opportunity to respond to Trocaire's Christmas appeal has not yet passed.

“I just want to say thanks for the massive support. We get incredible support year after year and especially at Christmas,” he concluded.

For more on Trócaire or to donate to the Christmas appeal, visit www.trocaire.org.