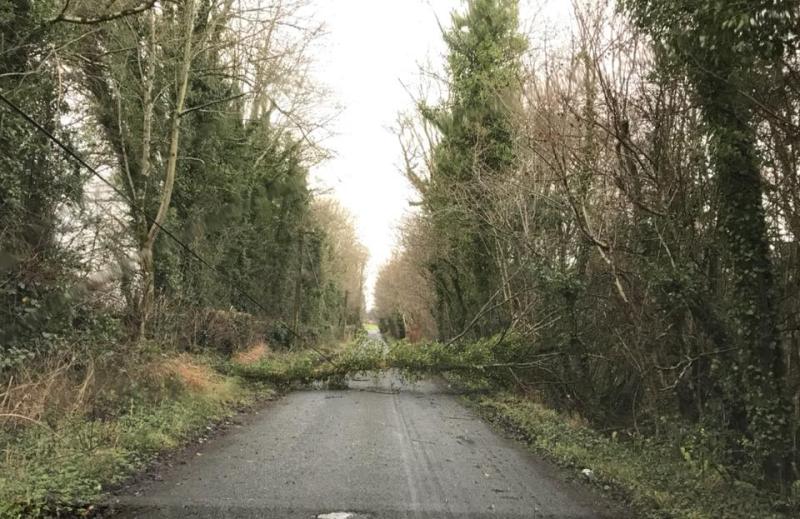 Lots of debris and some fallen trees across Longford in the wake of Storm Dylan. Photo of fallen tree near Abbeyshrule by Jenny White

Motorists are urged to be cautious as there is lots of debris and some fallen trees across Longford in the wake of Storm Dylan which gripped the country last night and early this morning.

@aaroadwatch roads around north longford are dangerous with a lot of debris and fallen branches!!

Jacqui Degnan tweeted about how dangerous roads were in north Longford, while Jenny White posted a photograph on Facebook of a fallen tree near Abbeyshrule in the south of the county.

Earlier today Met Éireann moved Longford from an orange weather alert to a status yellow wind warning and while there has been reports of debris and some fallen trees, it looks like the county escaped with no reports of any major damage caused by last night's very strong winds.

Met Éireann says: "Some very strong winds with mean speeds between 50 and 65km/h with gusts between 90 and 110 km/h are expected."

Gusts of almost 120km/h were recorded overnight at Mace Head in Connemara, with speeds of 111km/h clocked in Newport, Co Mayo.

Storm Dylan has now moved to the north of Ireland. Winds are generally easing, however they remain very strong & gusty in the north & northeast.
Orange and yellow wind warnings remain in effect until 9am.
The strongest recorded gust thus far was 124km/h at Malin Head.#StormDylan pic.twitter.com/PMEk6hcizQ

Meanwhile ESB Networks are reporting that 57 homes in the Rooskey area are without power this morning as a result of Storm Dylan. The outage was reported shortly after 7.30am this morning. The estimated restoration time is 12.30pm.

A further 22 homes in the Arigna/Drumshanbo area are also without power. The outage was reported at 6.48am this morning and power is not expected to be restored until 1.30pm.

*Fallen Electricity Wires are live and dangerous. Never approach or touch them. Call our emergency service immediately on 1850 372 999 or 999 or 112

Check your tickets! - Is the €38.9m Euromillions jackpot winner from Longford?