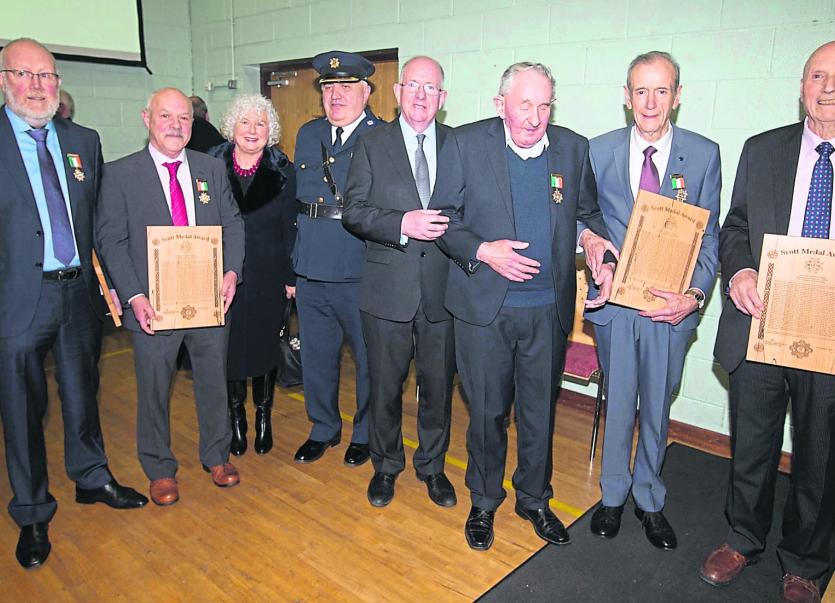 The Scott Gold bravery medal was presented to five gardaí recently, including Gerry Bohan, who resides in Newtowncashel.

Back in 1976, the gardaí were ambushed by an IRA bomb that exploded at a house in a wooded area of Co Laois after they responded to a threat on the life of the then Junior Minister Oliver J Flanagan.

One of the gardaí - Garda Michael Clerkin - died in the explosion and as Garda Bohan told the Leader this week, “It was important that the incident was acknowledged, even though it took 41 years for that to happen.”
Garda Bohan also pointed out how poignant the day was in that the medals for bravery were presented by the Minister for Justice & Equality Charlie Flanagan whose father the gardaí had set out to save on that fateful night back in October 1976.

“The presentation was an official recognition of the fact that the atrocity took place out there,” the retired garda continued, before recalling that night in detail.

Garda Bohan and Garda Clerkin had been on patrol on the evening of October 15 when they received a call to go back to the station as there was a message there that could not be read out over the radio.

“That in itself was very unusual, but we went back and Sergeant Jim Cannon told us that there was a number of men out in a old house in the woods and they were planning to kill Oliver J Flanagan,” he added, before pointing out that members subsequently organised themselves and made their way to the wooded area.

The two gardaí rounded up the troupes and with Sergeant Cannon in tow, met Garda Ben Thornton and Garda Tom Peters in the square in Portlaoise.

Together the five members on An Garda Síochana set out for the house in the woods.

When the arrived at the scene they searched outside and when they found nobody there, made the decision to go inside the property.

Garda Bohan and Sergeant Cannon went round to the back of the house while Garda Peters explored the area further down the garden.
Meanwhile, Garda Clerkin entered via a window and opened the front door for Garda Thornton, but as he went through the front door there was an almighty explosion as the bomb detonated.

“When I got out of the rubble, the whole house was gone,” recalled Garda Bohan who was just 22-years-old at the time.

“I was bleeding and shocked, but I made my way to the patrol car and tried to radio for help.

“There was no reply because the blast flittered the radio and blew off the aerial.”
Help from the locality arrived eventually and Garda Thornton was dragged to safety at that stage.

However, Garda Clerkin was discovered dead beneath the rubble.
He was just 24-years-old at the time.

For 41 years, the actions of the brave gardaí on that night went unacknowledged, that is until last week when the Scott Gold bravery medals were finally awarded.

Garda Bohan, a native of Co Leitrim went on to serve out his time in An Garda Síochána and was stationed in a number of counties including Galway, Dublin and Roscommon thereafter.
He also married Kate and together the couple have three children Katie, Connor and Peter.

He says that last week's momentous occasion that marked the event in 1976 came about in no small part to the efforts of one Superintendent John Scanlan in Portlaoise, a member of An Garda Síochána who was also stationed in Granard for a time during his career.

“It was through his great efforts that all this happened and we want to thank him for all he has done,” Garda Bohan concluded.