Donohoe says investment in Longford is just the start 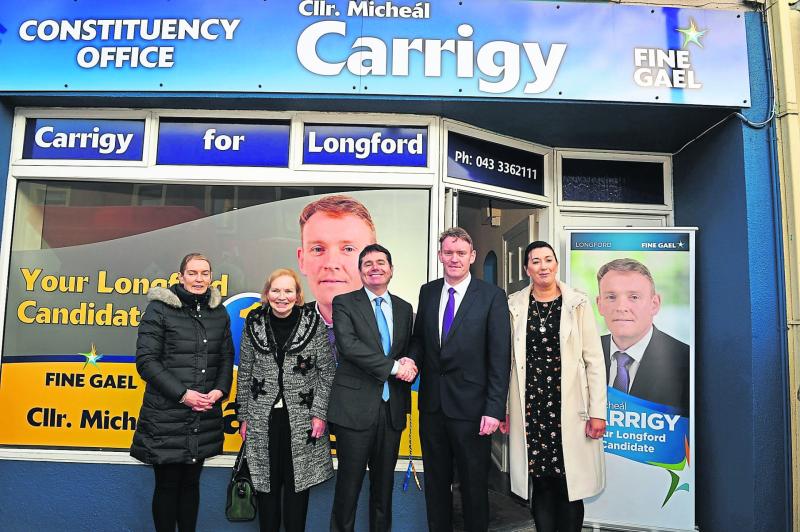 Freezing and sub zero temperatures might have led to widespread school closures across the county on Monday, but it certainly wasn’t going to keep Finance Minister Paschal Donohoe away from executing a promise he gave to Cllr Micheál Carrigy a number of months ago.

The Dublin Central TD was in town to officially set the seal on Cllr Carrigy’s constituency offices and immediately set down a marker as to Fine Gael’s political aspirations in Longford.

“We (Fine Gael) need to get a seat back here,” he said, as he complimented Cllr Carrigy on choosing Dublin Street to set up base in.
“That’s why I am here, that’s why Fine Gael headquarters are supporting all of you in your efforts,” he told party activists.

Afterwards, Mr Donohoe joined Cllr Carrigy and guests for a luncheon at the Longford Arms Hotel where further discussions about Budget 2018 and other topical issues were thrashed out.

Before they got underway, Mr Donohoe spoke candidly to the Leader about a recent volley of government announcements which has seen almost €8m in state aid come Longford’s way over the past two weeks.

“It’s a sign of the very strong commitment Fine Gael has to ensuring that Longford can benefit from the change in our economy,” he said.

“The ability to invest in Longford, the progress we have made with the (gas) pipeline to ensure more businesses can set up here and benefit from it are all parts of the commitment that Fine Gael has to ensuring that the county and town of Longford can participate from the economic recovery that is underway.”

Mr Donohoe said the reason behind the renewed emphasis on Longford was because the county “needs and deserves it” in order to benefit from Ireland’s economic upturn.

There were hints too of a positive announcement in the new year concerning the extension of the N4, a piece of infrastructure his Fine Gael sidekick has routinely espoused the importance of.

“I have worked with Micheál on a number of different matters he is aiming to progress on behalf of the town and county, like the pipeline, like his views on roads, the N4 and what we need to do to support the businesses of Longford town and county,” he said.

“We (Government) can achieve even more if we have someone of the calibre of Micheál in Dail Eireann.”
A ringing endorsement it may be, it’s one which could yet become a political reality.

And, if the man entrusted with delivering that goal has his way, it's a target that could well be borne out when the make up of the 33rd Dáil is ultimately decided.