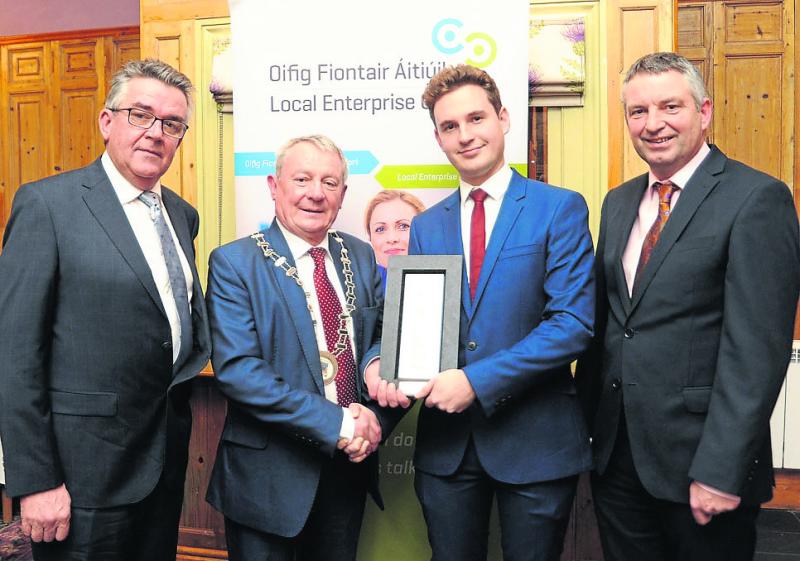 Run by the Local Enterprise Offices, IBYE is supported by the Department of Business, Enterprise and Innovation and Enterprise Ireland.

The Award is now in its 4th year and attracted almost 1,500 applications nationwide in 2017. Michael Nevin, Head of Enterprise in Longford said the search to find Ireland’s best young entrepreneur began in earnest back in August.

“We were delighted with the calibre of entries and after a very successful Enterprise Day, Bootcamp and County Final, I’m pleased to confirm that the future of enterprise and job creation in Longford is bright,” he added, before pointing to the winners.

On the day there was joy for Tess Gillen, aged 34 of Longford Fitness, winner of the Best Established Business award.

The company was joined by Niall Mimnagh, aged 29 of Mimergy in Longford, who took the runner up title in this category.

Meanwhile, the Best Start Up category became a hard-fought contest with Lorna Halligan and Daniel Skukalek, aged 30 and 29 of Nine Arches in Ballymahon eventually emerging victorious. Marie Reilly (29) of Love Culture in Longford was named runner-up.

“The winner was Warren Belton (24) of Magna Clava in Longford while Robert Higgins (28) of Harp Productions in Granard scooped the runner up title.”

The awards ceremony was attended by other special guests including Cllr Seamus Butler and Cllr PJ Reilly.

IBYE Co-ordinator for Longford, Catherine Kane added; “Each of the winners and runners-up will share in an investment fund of up to €50,000 from the Local Enterprise Office to help grow and develop their business.

The three category winners go forward to the Regional Finals in Donegal in January. The team in Local Enterprise Office Longford will be providing intensive supports between now and then to prepare them for the regionals and hopefully Longford will have a representative at the IBYE National Finals in March.”

Stay up to date with the competition by following on Facebook, Twitter, Google+, LinkedIn and YouTube. Find out more about supports available to entrepreneurs of all ages by visiting www.localenterprise.ie.