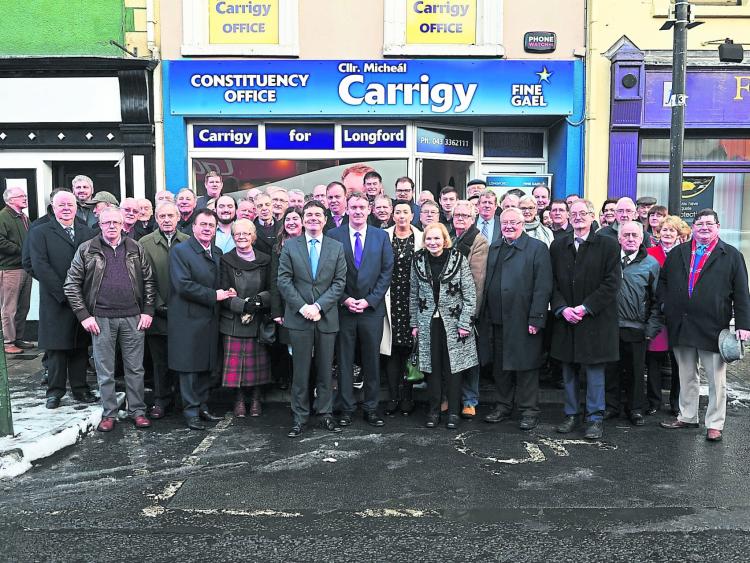 The message is simple.

Micheál Carrigy is primed and ready to pull out all the stops to reclaim a Fine Gael seat in Longford at the next election.

It was a pledge that was aimed as much at a large gathering of supporters who witnessed the opening of his constituency office on Monday as it was at the Ballinalee postmaster’s political detractors.

This was a man who meant business, a man who looked every inch the TD Longford and its 40,000 strong populace have been crying out for since its Oireachtas representation dissipated at the February 2016 general election.

Cllr Carrigy was assured and polished in both his poise and the way in which he outlined his political credentials in front of onlookers on Monday morning.

“My aim is to win back the seat for Longford,” he staunchly put it.

“It's vitally important that we (Fine Gael) have a presence on the ground.”

In truth, the opening of Cllr Carrigy’s general election command post on Longford town’s bustling Dublin Street is somewhat of a fallacy.

Behind the scenes, Longford County Council’s Fine Gael group leader has been working diligently behind the scenes, holding regular clinics while at the same time endeavouring to progress a string of locally focused investment projects.

The fruits of those labours, he claimed, have already began to surface most notably with the recent €5m extension of the national gas pipeline to Longford alongside a €600,000 digital and innovation hub.

“There’s a long road ahead,” he remarked, in terms of turning his painstaking lobbying efforts into all important votes.

“It might be in three or four months, it might be in 18 months but I am prepared to put the groundwork in to deliver that seat with all your support.

“That’s what I need, for everyone to row in behind me and work with me to deliver the seat for Longford.”

Straddling Cllr Carrigy was Finance and Public Expenditure Minister Paschal Donohoe who travelled to the county to offically cut the ribbon on his party colleague’s constituency office.

Like Cllr Carrigy, he too issued a rallying cry to party supporters to throw their weight behind the Granard area representative’s campaign in the weeks and months ahead.

“I am asking all of you to put all the efforts you can in to make sure Fine Gael returns a TD in this election for your constituency and your community, to give all the help you can to this wonderful candidate and to get him over the line,” he said.

The final word, perhaps fittingly, went the way of the man tasked with fulfilling that promise.

And, he left few if any in doubt as to how he intends living up to those attributes.

“People are going to vote for me based on my track record and in terms of what I am able to deliver on,” he said.

“I feel I have a far better track record than any candidate that’s out there and I think I have that ability to deliver for Longford.”