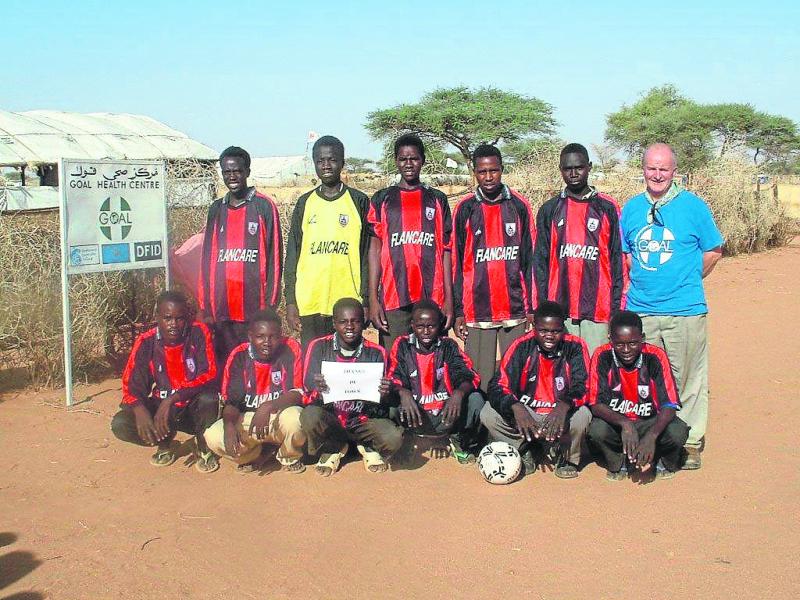 For the past forty years, GOAL has been one of the first organisations on the ground to respond to humanitarian crises around the world since its humble beginnings in 1977.

Longford’s Tiernan Dolan, through working in a volunteer capacity with GOAL for the past three decades, has seen first-hand the positive impact that GOAL’s humanitarian and emergency response interventions have had on the ground, where it truly matters.

A retired secondary school teacher and well-respected member of the Longford community, Tiernan has worked as a dedicated volunteer with GOAL for over 30 years helping to raise vital funds for its humanitarian programmes.

A farmer and photography enthusiast, he has worked tirelessly to raise funds in Ireland to support GOAL’s humanitarian work in places as far afield as Afghanistan, Honduras and Sierra Leone.

In fact, with the support of his local community, he has raised an incredible €1.1 million to support GOAL’s work around the world. “I’m just an ordinary man, living in a very ordinary place, but I have been to some extraordinary places. I have had the privilege to witness the incredible dedication, commitment and passion of the most extraordinary people.. the GOALies,” he says.

Tiernan jumped at the opportunity to provide humanitarian assistance to some of the faraway places he fundraised for, with his first visit overseas taking him to a war-ravaged South Sudan in 1993. He arrived at a time when the country was experiencing a bitter civil war resulting in severe food scarcity with thousands in need of humanitarian assistance.

Tiernan was especially affected by the sight of many young children, some of whom were severely malnourished and experiencing great hardship during their young lives at that time.
“It was an emotional sight, and I don’t mind admitting that I shed a tear or two,”he recalls.

Tiernan also had the chance to visit one of the hospitals that GOAL was running that provided life-saving treatment to those affected by the ongoing civil war. He recalls meeting a boy as young as 17, who was receiving treatment for his wounds.
“I will never forget that he asked me how I was doing, despite the fact that he was greatly wounded at the time.”

He also recalled a visit to El Weine, a remote area outside Gode near the border between Ethiopia and Somalia.

He said his memories of the place will stay with him forever. When he arrived, he faced a scene of depleted grasslands, where rain had not fallen for three years, river beds were dry and where people were suffering from the devastating effects of a harsh climate. The GOAL team responded by distributing food and water to 820 men, women and children in the area.

Tiernan was affected by the sight of a once abundant river greatly depleted, and seeing the villagers struggling to gather enough water into what little containers they had to distribute to their community.

Amongst the devastation faced by communities because of war, conflict or natural disasters, there also lives hope.
One such example was alive in a rural village situated deep in the mountains of Northern Afghanistan, where GOAL arrived on the scene to provide emergency assistance to people who had experienced the detrimental effects of war.

Tiernan recalls being greeted by children “beaming from ear to ear”, despite the devastation that had taken place. The children’s school had been reduced to rubble during the conflict. At the time, GOAL had been allocated crucial funds to rebuild the destroyed school, and so the children were given much needed hope to continue their education, rebuilding their lives and improving their future.

Tiernan is grateful to have seen the positive effects that GOAL’s humanitarian interventions have had on the communities they engaged with, and heard first-hand the heartfelt messages of thanks and appreciation from those affected.

“It's my utter privilege to be associated with GOAL and the GOALies,” he says, having never second-guessed his commitment to GOAL’s cause as "hard work”, but instead considering it “a genuine privilege” to provide help to those in need.

He is particularly grateful to long-standing GOAL humanitarians John O’Shea and Maura Lennon for believing in his commitment and providing him with the opportunity of working on behalf of GOAL.

Over the years, the generosity of the people of Longford has been exceptional, with the community raising upwards of €1.1 million to support GOAL’s humanitarian programmes overseas.

Such examples of generosity from Longford’s community include a group of local builders who came together and gathered funds to help rebuild houses in Honduras after it was hit by Hurricane Mitch in 1998.
Not only that, but alongside raising funds, the Longford community also provided additional items like football jerseys for communities in Darfur so local teams can wear their kit with pride.

Celine Fitzgerald, General Manager of GOAL told the Longford Leader, “On behalf of our hardworking staff here at GOAL, I would like to extend my utmost appreciation for the wonderful dedication shown by Tiernan Dolan in supporting GOAL’s crucial humanitarian work for the past thirty years. GOAL is privileged to have benefitted from committed volunteers like Tiernan who have raised funds and helped to implement our work overseas, enabling GOAL to reach the most vulnerable people during times of great humanitarian crises.”

Today, Tiernan continues to support GOAL’s work. Over the Christmas period, he will gather his local community in Longford to join in the annual GOAL Mile event - a chance for communities to come together and raise vital funds to support GOAL’s humanitarian work in the developing world.
The GOAL Mile is now in its 36th year, with the Longford GOAL Mile taking place in Connolly Barracks at midday on Christmas Day.

This year’s event in Longford is held in memory of Ina McCormack, a kind-hearted and generous member of the community who passed away last Christmas Day.