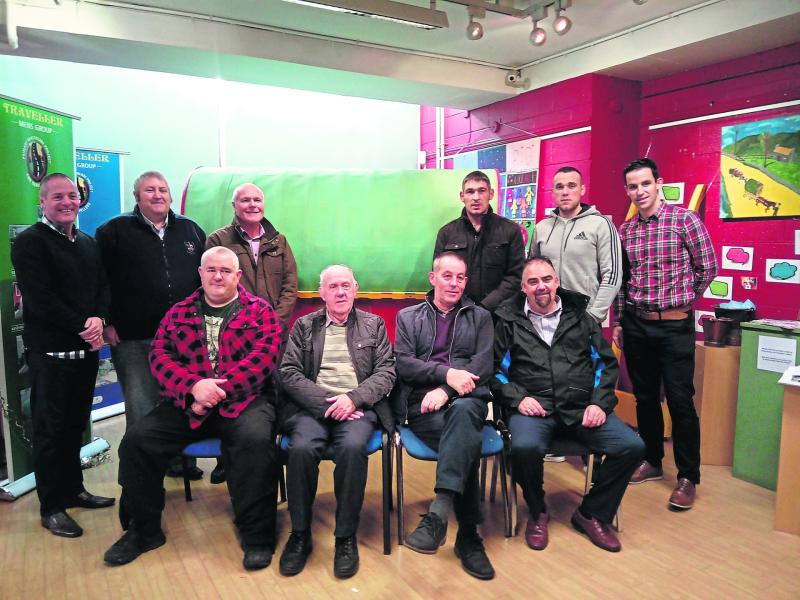 In an era when many of the old skills such as the blacksmith, the thatcher, the tinsmith have all but disappeared this event on Thursday, November 23 was one that showcased and celebrated local craftsmanship at its finest.

The event was officiated by Tony Owens, Coordinator of the project.
Tony gave a brief history of how this project came about and its significance when it came to the health promotion work carried out by the team.

Local priests Fr Tony Gilhooley & Fr James McKiernan blessed the wagon and praised the work and craftsmanship of the project.
This was followed by the cutting of the ribbon and a few words from Michael Nevin, the designer of the wagon.

Michael told the audience how he learned his trade from his father and uncles and remembers the days when they built wagons on the side of the road with nothing other than a bag of hand tools containing not much more than a hammer, a handsaw and some nails.

During the speeches the project was likened to the poem ‘The Forge’ by Seamus Heaney not just for its links to the ‘olden ways’ but also as a way of using the creative process as a means of engagement with the harder to reach members of our communities, in this instance Traveller men.

The overall aim of the LCRL Traveller Project is to deliver a health promotion services to a group of people that traditionally are hard to reach and whose health outcomes are still significantly worse off than the general population.
“For the staff on the Traveller Project this is what makes engaging in the creative process so important,” said John O’Brien, Traveller Men’s Worker.

Mr O'Brien added, “The creative process can come in many forms, not just a beautiful piece of art like the wagon: it can be in the form of sport, entrepreneurship, education, or whatever a person is passionate about. When you engage someone in something they love to do the outcomes are so much more meaningful and sustainable.”

Mr O’Brien also thanked all the local stakeholders and volunteers on the project, not least Longford Men’s Shed who helped with the completion of the project, Longford Vintage Club for storing the wagon over the years, Frankie Ward of Inchboffin Carriages, Fitzgerald Fabrication, Longford Westmeath ETB, LCRL, Longford County Council and Longford Library.
The final round of applause was held for the group of men who built this wagon. They were Michael Nevin, Patrick Stokes, John Nevin, Anthony Nevin, Thomas McDonagh, Tony Owens and Kieran O’Brien.

The wagon was on display for one week in Longford Library before being transferred to Longford Vintage Club who will display the wagon at their annual event every June and also at the various road shows they attend each year.

Number of Irish Travellers residing in Longford has increased by 39.3%