Future politician ‘inspired by Leo Varadkar’s vision for the country’ 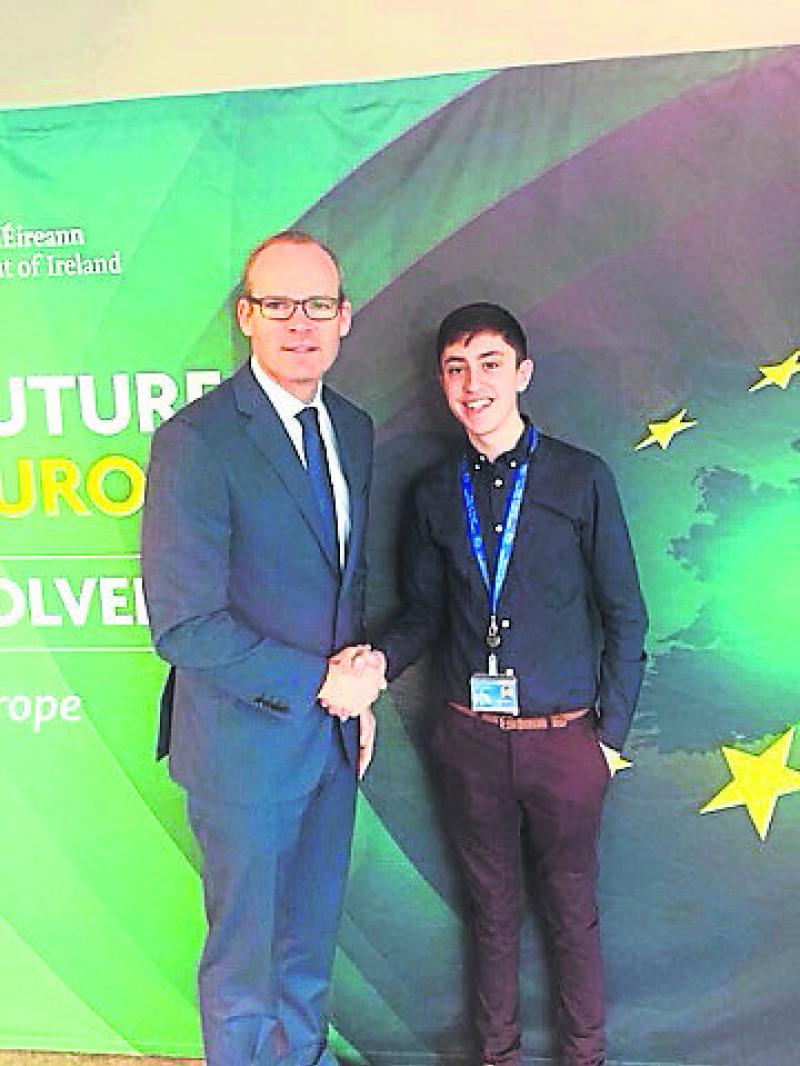 Transition Year is a great opportunity for students to decide what path in life to follow; they get to experience the work-place for the first time, whether it be in a school or solicitors.

Few, however, get the chance to work alongside government ministers and even the Taoiseach himself.

St Mel's College student Luke Casserly had this opportunity when he completed a week's work experience in the Government Buildings.
In this article, Luke details his time in Dublin. He writes:
“Last week I had the honour of carrying out TY work experience with Taoiseach Leo Varadkar and his staff in Government Buildings. I’ve always been extremely interested in politics and current affairs, so this opportunity was perfect for me.

“Walking in the gates of Government Buildings on Monday morning gave me a real buzz. I was greeted by Jim, a member of the Taoiseach’s staff.
“He gave me a tour of the Department and Leinster House. We went for a cup of tea in the Dáil restaurant before I was brought to the Taoiseach’s private office. I met with some of the rest of his staff in the wing, including his Chief of Staff and Communications Adviser.

Then I got to see the Taoiseach’s office. It was surreal to be in there, after seeing it in pictures and on television for years. I got a few pictures at his desk and sat in his seat. I even got to see the famous ‘Mr Taoiseach’ mug in real life! There were strong West Wing vibes in the office, I wasn’t expecting it.

“On Tuesday, I met with Lisa, the Taoiseach’s personal assistant. I was based in the PA’s office for the morning where I worked on some constituency work for the constituency staff. That afternoon, I met the Government Chief Whip and Minister of State for Gaeilge, Gaeltacht, and the Islands, Joe McHugh. I chatted with him for a few minutes while we waited for the Taoiseach to leave his office.

“Soon after, the Taoiseach emerged from his office, we shook hands and chatted while we walked to the Dáil Chamber for Leader’s Questions. I have to say I was star-struck, even though I’ve met him before, this time it was much more personal.

“We spoke about Transition Year and he asked questions about Longford. He spoke about St Mel’s Cathedral and the rebuilding, and my school, St Mel’s College. We chatted about politics too.

“I watched Leader’s Questions from the Dáil gallery and once the Taoiseach left the chamber, I went and met him, Lisa and Minister McHugh. We walked back to the office and he came into the PA’s office for a while. It was strange sitting down informally in the same room as him. We chatted a bit while he had his afternoon ‘sugar rush’ of some wine gums before he headed back to work.

“On Wednesday morning I attended the launch of the Future of Europe Citizens Dialogue in the Science Gallery, Trinity College. I met with Jim, and Pat, a protocol officer at the Department of the Taoiseach who manages the logistics of events the Taoiseach attends. It was interesting to see the work that goes into planning and organising something as simple as the Taoiseach entering and exiting a building. As well as an Taoiseach, the Minister for Foreign Affairs, Simon Coveney, and Minister for European Affairs, Helen McEntee, were in attendance.

“There was a heavy media presence, cameras and reporters from RTÉ, TV3 and most of the big radio stations and newspapers. I got to meet and chat with Simon Coveney and Helen McEntee, they were both very nice and seemed genuinely interested in talking to me. When the Taoiseach arrived, in the back door, the media rushed to get a glimpse of him. He made a great speech at the launch, then had to leave early to prepare for Leader’s Questions.

“I headed back to the office and then walked to the chamber with the Taoiseach, Minister McHugh, and Lisa again. After that, RTÉ came to interview the Taoiseach on the retirement of Gerald Fleming, the weatherman and meteorologist. I sat in the interviewee chair while the cameraman aligned the camera and worked on lighting. It was interesting to see the clip-on television after being there when it was recorded.

“Straight after the interview, there were two photo-calls, I accompanied the Taoiseach and members of his press staff to the Department lobby and staircase where the photos were being taken. After this, the Taoiseach and I walked back to the office and we had some really interesting discussions. He’s a very relaxed, calm person. Soon after this, Peter Burke, TD for Longford/Westmeath, came over to the office and met me. We got a picture with the Taoiseach in his office.

“On Thursday I spent the morning in Minister Helen McEntee’s office in the Department of the Taoiseach. I helped do some research on a speech she was giving on Government supports for SMEs. I spent the rest of the day in the Taoiseach’s private office with the diary staff. Their work involves organising the Taoiseach’s diary.

“When the Taoiseach gets invited to an event or is asked to speak at a launch, they process the request and check to see if he is available. Once they have a list of events he is available to attend, they bring it to him and he hand selects which ones he wants to go to.

“I spent Friday in Leo’s constituency office in Ongar, Dublin West. He was away in Gothenburg, Sweden at the EU Social Summit. I met the staff that work in his office during the week. It was really insightful to see the hard work he and his staff still do in his constituency.

“The week has given me a lot of food for thought about the future. As someone who’s been interested in politics for a while now, I think the experience has confirmed what I want to do in later life.

“The buzz and atmosphere in the corridors of Leinster House was amazing. I witnessed first-hand how hard the Taoiseach works and have been inspired by his passion and vision for the country.”