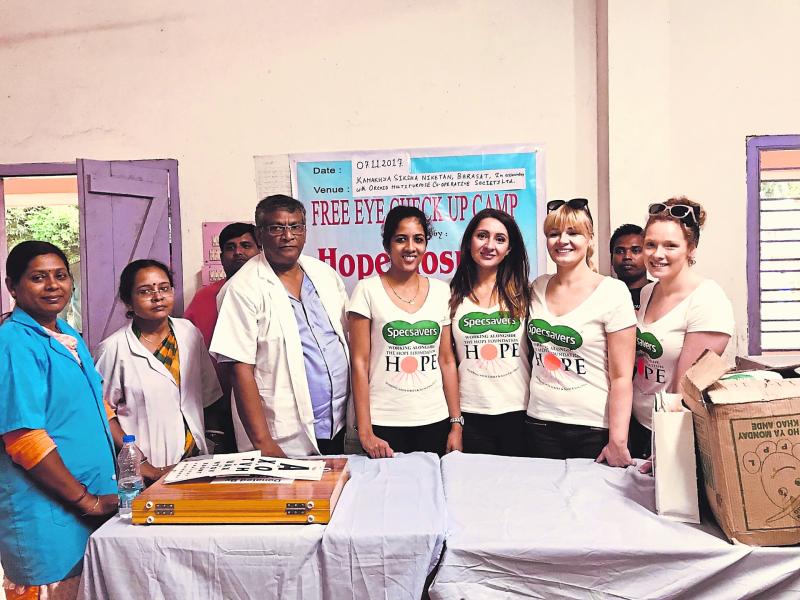 A team of optometrists from Specsavers have just returned from a successful trip volunteering for The Hope Foundation in Kolkata (formerly Calcutta) bringing sight to over 1,000 people.

Ateam of optometrists from Specsavers have just returned from a successful trip volunteering for The Hope Foundation in Kolkata (formerly Calcutta) bringing sight to over 1,000 people.

Having raised over €11,000 for the charity ahead of the trip, the group spent seven days in the Indian city, marking the first mission that Specsavers has embarked on with the charity.

Specsavers store owners across the country donated money towards the charity in order to purchase glasses for the team to bring to Kolkata but to also purchase a portable auto-refractor machine, worth €6,500, which was gifted to the Hope Foundation.

During the seven days, store director Lisa Walsh, together with opticians Orla Murphy and Jasmine Jose and dispensing optician Edwina McKinney, carried out over 1,000 eye tests on people.

They dispensed over 300 pairs of glasses and 600 pairs of the pre-made bifocals to those who were tested.

In addition to this, urgent referrals were made for eye disease and trauma-related issues, as well as 100 referrals for cataracts, to The Hope Hospital.

For many of the patients, this was their first experience having their eyes tested, highlighting how many people do not have access to basic health services in this part of the world.

A number of those tested had reduced vision because of uncorrected refractive error, one of the most common causes of treatable blindness in the developing world.

Speaking about the team who travelled, Longford store director Fiona Ferguson said: “We are delighted to have supported our colleagues as they proudly represented our brand on their mission in Kolkata. Bringing expert eye care to people is at the core of what we do.

"We are thrilled that the team joined the Hope Foundation to bring our expertise and services to those who truly need it so supporting this cause through fundraising locally was an honour.”