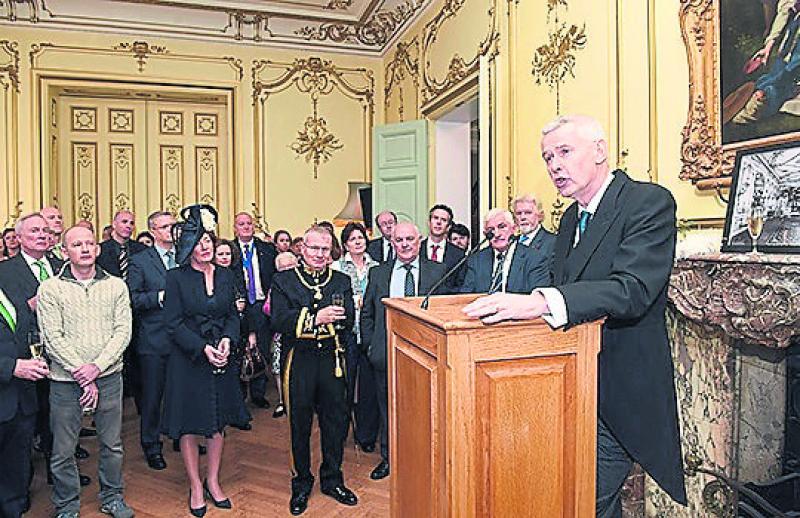 On November 8 2017, Adrian O’Neill handed his credentials to Her Majesty Queen Elizabeth to become Irish Ambassador to the UK.

The new Irish Ambassador to the UK is a man who has strong connections to Co Longford. Adrian O’Neill took up his new position last month and his family on his father’s side hail from Legan.

His dad Tom was a native of the village and the Ambassador spent many summers exploring the county when he was a youngster.

“As a child and even into my early teens I spent my summers in Legan,” Ambassador O’Neill told the Leader this week.

“Dad had a number of brothers, in there were nine of them including Peader, Joe, Jim and Stephen, and three of them lived in Legan, two went on to become guards and three, including my father, moved to Dublin.

“Stephen played the accordion and his family were well-known in traditional music circles.”

Ambassador O’Neill’s memory extends a long way back and he recalls trips to Edgeworthstown, which he adds, “was the nearest big town to Legan” in those days.

“I also remember a visit once to Pearse Park in Longford town,” he smiled recalling the event.

“I can’t remember who Longford playing but they were narrowly defeated on the day!”

Ambassador O’Neill also played handball in the handball alley in Legan and has some very fond memories of that time.

Married to Aisling, the Ambassador and his wife have two adult children - Thomas and Aoife.

And in a twist of irony, Aoife too has made her own connections in Legan.

She has attended the famous Shawbrook Dance school on the outskirts of the village on a number of occasions down through the years.

“My daughter went to Shawbrook Dance school there, so it’s nice to have that connection,” the Ambassador continued, before pointing to the more serious business of his new role and outlining his goals for his term in office.

It was on November 8 last, that Ambassador O’Neill handed his credentials to Her Majesty Queen Elizabeth, a lady whom he has met before.

On the day he had the honour of presenting his letters of credentials to her, he was accompanied by his wife Aisling and four of his colleagues in the Embassy, Deputy Ambassador Don Sexton, Political Counsellor Gerald Angley, Economic and Trade Counsellor Hennessy and First Secretary Nicole Mannion.

Upon receiving the new Ambassador's credentials, Her Majesty was welcoming and indicated her interest in the welfare of Ireland and the state of relations between the two countries.

On the day, the Queen also recalled with great affection her State visit to Ireland in 2011 and conveyed her best wishes to President Higgins and the Irish people.

That day also, sadly, marked the 30th anniversary of the Enniskillen bombing and the Ambassador reminded those present of the shared determination to protect the gains from a process that has not only delivered peace in Northern Ireland but has transformed the totality of relations across these islands.

And, while both nations have celebrated all that has been achieved in recent years, Ambassador O’Neill warned against a sense of complacency that could take any bilateral relations for granted.

The Ambassador also told the Leader last week that relations between Ireland and the UK have never been as strong and this will go a long way to enhancing Brexit negotiations between the two nations.

His role as ambassador to the is less about politics and more about public duty, he added.

Meanwhile, when his father, Tom, arrived in Dublin in the 1940s and took up a position at Guinness Brewery, he worked alongside his brother and stayed with the company until his retirement.

Ambassador O’Neill says that while his father was interested in politics, current affairs and all that was happening in the world, it was not this that influenced his role in public service.

“Dad didn’t have an especially strong interest in politics, but I do remember the first time I had my vote - that was in 1977 - and he and I went to the polling station together and I was under no illusion after we came out what side he was on, I can tell you,” the Ambassador laughed as he recalled the day.

Having studied history at Trinity College, the Irish Ambassador to the UK graduated in 1983 and joined the Department of Foreign Affairs.

Over the years he held three postings overseas - Madrid, London and Washington before returning to Ireland in 2000.

From 2010-2014 he served as to the president and that role included service to former President Mary McAleese and current President, Michael D Higgins.

One of the highlights of his career to date was Her Majesty, Queen Elizabeth’s visit to Ireland back in 2014 and President Higgins’ return visit thereafter.

“Both of these visits did so much for the relationship between Ireland and the UK,” continued the Ambassador.

“The Queen’s visit demonstrated the visible confirmation of the huge improvements in the relationship between Ireland and the UK.”

“When I presented my credential a couple of weeks ago, I met the Queen and she indicated to me how much the visit to Ireland had meant to her,” he added, before pointing to the many challenges that lie ahead.

“While we are all aware that Brexit will be a major policy challenge, it is important that it does not become the only issue on the agenda.

“There is so much going on between Ireland and England and there is much to celebrate now.

“While Brexit brings a cloud, it should also bring out the sun.

“I want to ensure that we broaden and deepen the links between our countries and keep the momentum that is there going.”

“The Irish connections in Britain are deep and diverse and that diversity is represented in the flourishing economic relationship between our two countries; in the vibrancy of our cultural links and the rich interaction of our artists and sportspeople; in the respectful commemoration of significant moments in our intertwined history; and through the lives of many citizens and descendants of Ireland for whom Britain is home.

“In undertaking my new role, I am deeply conscious of the generations of Irish people past and present who have contributed so much to here in Britain and, indeed, to Ireland.”