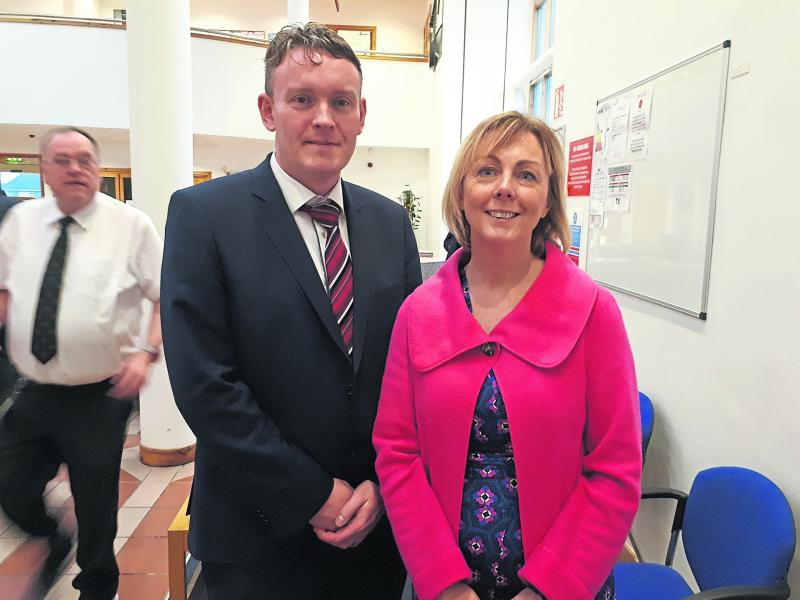 Minister for Social Protection Regina Doherty has given the thumbs up to a planned €300,000 extension of car parking facilities at her department's headquarters in Longford town.

The Meath East TD was in Longford on Monday just hours after news broke concerning the ambitious plan.

That came courtesy of an announcement made by Minister for the OPW Kevin 'Boxer' Moran on Sunday night and which was carried on the Leader's website, www.longfordleader.ie

Speaking in the aftermath of that pledge, Ms Doherty said the project would go a long way towards alleviating parking congestion problems in and around the Ardnacassa based building.

“We have allocated funding to provide 30 new car parking spaces here at the Department of Social Protection,” said Ms Doherty, as she laid claim to the “excellent” facility and service it continues to provide.

“My colleague, Minister Kevin Moran announced this morning that he was allocating money from the OPW for the project and it will now go to tender.”

Mr Moran, for his part, said long standing concerns linked to parking issue around the building had been well documented in the past.

This week's projected cash injection, he said, was both timely and vital in eradicating those anxieties.
Mr Moran said the proposed works to expand the car park as well as other changes to its existing layout was not purely motivated to cater for the needs of one section of society.

The former taxi driver said the development would effectively bring an end to congestion and traffic flow problems in what is arguably one of the most busiest residential areas of town.

“This is to facilitate both staff and clients,” he said.

“The Department of Social Protection is the largest client in the building, which also houses the Road Safety Authority and Department of Agriculture, Food and Marine Staff.”

One of those, Mr Moran publically thanked for their input into prompting this week’s announcement was fellow non-party representative Cllr Gerry Warnock.

In a post carried on his own Facebook page on Sunday night, Cllr Warnock said the measures outlined would bring welcome respite to dozens of homeowners and locally based residents.

“Fantastic result for the residents of Springlawn, Oakvale and Ardnacassa Avenue who had to endure parking congestion within the estates as a result of insufficient parking to cater for activity in building.”