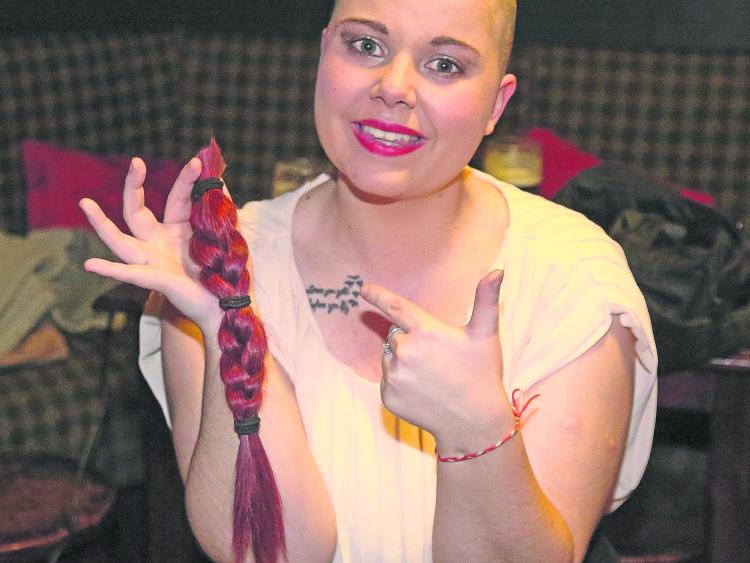 Naomi before, during and after shaving her head. Her hair will be turned into a wig for a child with leukemia.

The end of November signals the end of the moustache for many men who take part in the annual Movember challenge for charity.

But this year saw something a little different as Naomi Burke arrived at the shave-off event in Edgeworthstown on Saturday night not to shave off a moustache - but to remove all of the hair on her head.

And she did it to support a very worthy cause.

“I do be up and down to St. James' Hospital and the Mater because of a heart condition,” Naomi told the Longford Leader on Monday afternoon.

“One day I was up there and I met a four-year-old girl who had leukemia.

“She had no hair and she liked my hair. So I decided to shave it off and now it’s being turned into a wig for her.”

Naomi had her hair shaved off at an event in Edgeworthstown, which saw a number of moustached men do the same, following a month of fundraising in aid of men's cancer.

And, while shaving a moustache off is a very simple act for a man who has been growing it for just a month, it takes a huge amount of bravery and confidence to shave off a head of hair that has been there for a lifetime.

“I felt grand about it though,” Naomi explained.

Of course, with temperatures plunging as the winter sets in, the hair loss will certainly affect Naomi far more than it will affect many other Movember challengers.

“It's definitely cold,” she laughed.

“It's fine when I'm in a shopping centre or something, but when I'm outside for a walk or just out and about, I have to wear a hat to keep my head warm.”

But she's quick to point out that the charitable act was for a very worthy cause.

“There's one thing I've been saying to everyone who has asked me why I shaved all my hair off,” she said.

“I tell them that all I've lost is a bit of hair that will grow back. But people who die of cancer don't come back.”

Thanks to Naomi's brave and selfless act, a little girl with leukemia will have a beautiful wig.

And, like Naomi said: her own hair will grow back again in no time.

Longford men get behind Movember