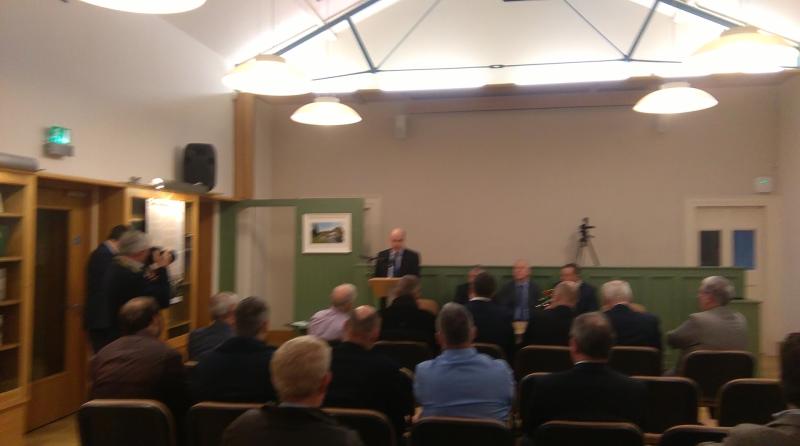 A multi million euro agreement to bring the national gas pipeline to Co Longford will provide the springboard to transform the county as an ideal location for businesses to operate in.

Environment Minister Denis Naughten and OPW Minister of State Kevin 'Boxer' Moran both waxed lyrical of just how instrumental the move could be in transforming Co Longford's economic well being into the future.

Mr Naughten laid much of that optimism at the door of UK leisure giant Center Parcs and its plans to open a €233m holiday resort in Ballymahon in around 18 months time.

His Independent ministerial colleague, Kevin 'Boxer' Moran underlined that mindset, saying this evening's formal announcement set the seal on many months of behind the scenes work.

And, after being branded 'Minister Kevin Boxer Gas for Longford Moran' by Mr Naughten, the Athlone based politician, not for the first time berated those who cast doubt over whether the deal would happen.

"Some people said when I got this job (Minister for OPW) 'Oh your an Athlone man, you'll do everything for Athlone', but I said to the people of Longford 'Adopt me for as long as this Government lasts and if I fail, throw me out'.

Cathaloirleach of Longford County Council, Cllr Martin Mulleady was just as enthused, citing the role played by senior officials within the Council in helping to engineer the gas extension.

"This is a major announcement for our county and will open up our county to business," he said.

"I spoke about it at the (Ganly's) Longford Sport Star Awards Awards last night when I said that I haven't worked with a better team in Longford County Council.

"We have outstanding directors in our county at the minute that's bringing investment into the county and you can see how things are starting to open up in our county over the last two to three years."

The Council's most senior official, CEO Paddy Mahon heralded the agreement as a key component in restoring Longford and the midland's economic fortunes into the future.

"This is just the start of the revitalisation of rural Ireland in allowing towns like Ballymahon and Longford to compete with other parts of the country that have had the advantage of infrastructure put in place.