Local authority will spend €42.8m in 2018 across eight service divisions 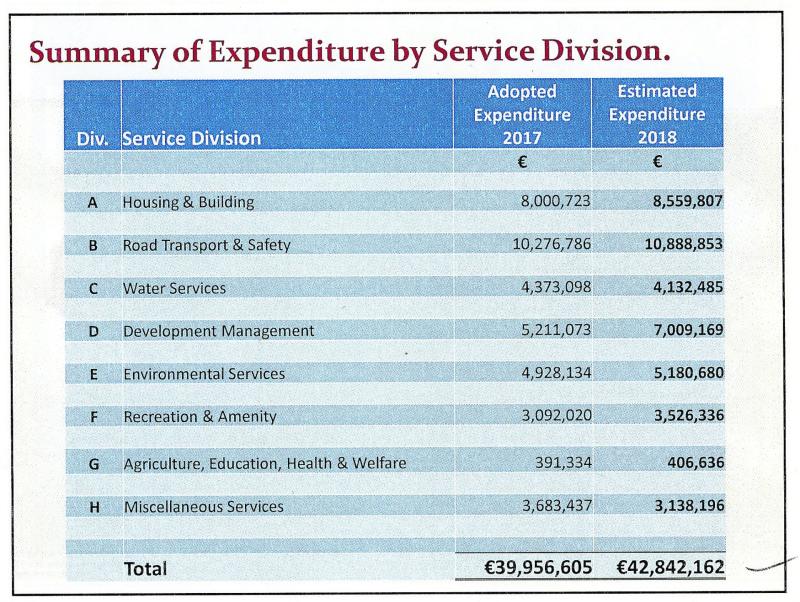 Longford County Council will implement a “robust, visionary, flexible and pro business” budget next year by loosening its purse strings by almost €3m

Longford County Council will implement a “robust, visionary, flexible and pro business” budget next year by loosening its purse strings by almost €3m.

Local politicians gave their ringing endorsement to plans by the local authority to spend €42.8m in 2018 across eight service divisions.

It represents a €2.88m hike on what the Council shelled out 12 months previously, bringing its spending levels up by over €5m compared to what was spent locally in 2016.

Council Chief Executive Paddy Mahon said with a steadily improving economy, an increased worforce and ever more requirements demanded of it, there was a pressing need for the local authority to meet those challenges head on.

“We (Council) have ambitious plans for the county and with significant demands across the length and breadth of the county, we need a budget that's fit for purpose and fulfill the plans that you have put in place,” he said.

They were observations Mr Mahon directed at all corners of the Council's chamber on Monday evening, comments which came in for wholesome support from elected members.

Cllr Gerry Warnock started that largely upbeat disposition, claiming the progress achieved by the Council over the past four budgets was an “extraordinary feat” for such a small county.

He also said it was important for local people to realise the Council were not in the business of heaping more pressures on cash strapped firms, saying that close to two thirds of businesses had in fact benefited from newly adjusted rates valuations.

There were a number of lobbying calls for minor adjustments to be made to the Council's budgetary targets for 2018 also.

Fianna Fáil's PJ Reilly asked for over €60,000 still lying in a bank account belonging to the now defunct Granard Town Council to be used to purchase the north Longford town's 12th century Motte.

There were appeals too, from Cllr Butler to apportion €20,000 to each Municipal District in 2018 to progress their own CCTV systems.

This, he said, could be taken from the Council's €142,000 surplus and provide added financial clout to the €30,000 already approved towards the maintencance of Longford town's CCTV system next year.

However, Cllr Gerry Warnock advised for the monies to be used when, and if, a nationally driven scheme aimed at promoting community based CCTV comes on stream.

They were invitations which met the approval of the Council's executive team, not before Fine Gael Councillor Peggy Nolan appeared to criticise her own party's handling of the issue.

“I believe this (CCTV) should be funded totally by the Department of Justice.
“I am talking about a government I am part of, but let's call a spade, a spade,” she maintained.