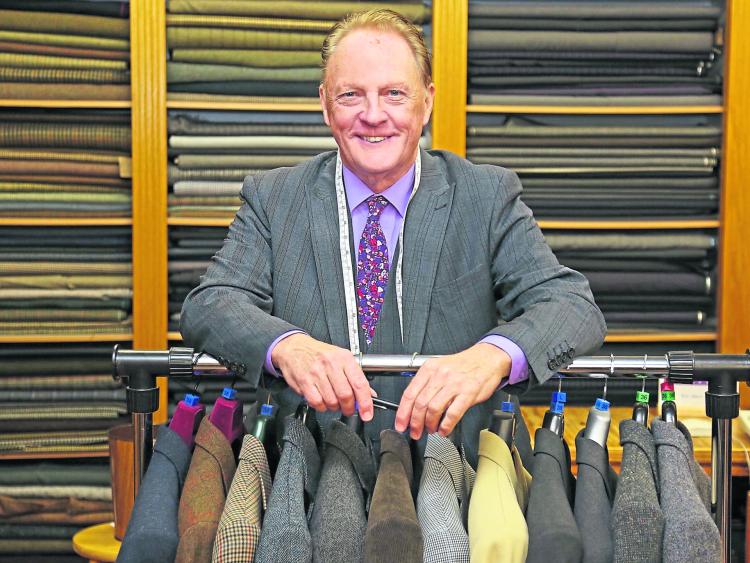 Tom Kelly is focused now on trying something different

It is the end of an era in Longford town as Tom Kelly calls time on his career in the rag trade.

Tom has been running Kelly Menswear on the Athlone Road since 1991 but he has been synonymous with the fashion trade in Longford and beyond since the late1960’s.

Tom grew up in Dublin and, while there were many on his mother’s side who worked as seamstresses, he was the first of the men to venture into a then vibrant tailoring trade in the Irish capital.

An early influence on his chosen career would have been his sister, Marie, who worked with the celebrated milliners Vard’s, and was also a successful model.

Tom was 17 when he began his apprenticeship with a Dublin tailor and over the next few years worked in the bespoke suit and garment sector with tailors in Dame St., William St., Henry St. and Capel St. - the real heart of the fashion trade in the capital at that time.

“The city was full of tailors and the ready made suits were really only starting to come on stream in Dublin at that stage,” he said. Tom was quickly singled out as a top class tailor, but more importantly, as a solid worker with a good business eye.

Dubtex was one of the biggest manufacturers of suits and overcoats in the capital at the time, and run by the White family. They made an approach to recruit Tom as one of their production managers.

This took his career in a whole new direction and soon he was one of only 12 people selected nationwide for a two year ANCO scholarship course for specialists in the fashion trade.

“Really it was about giving me the technical know-how for the practical skills I had, and it was a huge breakthrough for me,” continued Tom, before pointing out that he finished the course with the second highest marks in Ireland.

Suddenly many of the big firms were knocking on his door, and his first assignment was the redevelopment of a ladies manufacturing company, Cater Platt, in Abbey Street in Dublin.

He successfully doubled their production inside the first year, and from that position moved on to Manford Clothing, in Ballymahon, owned by Longford business man Noel Hanlon.

It was 1981 and Tom had been living happily in Skerries but the call to Longford was simply too big to turn down.

“It was one of the biggest jobs in the business in Ireland at that time,” he recalled. “The only equivalent would have been Magee’s in Donegal.

Manford were producing overcoats, suits, and in addition, were the biggest corporate manufacturers in Ireland, producing for the Garda, FCA, CIE, Aer Lingus, the regional Health Boards and many more.

Their export markets included the UK, USA, Iraq, Iran and Saudi Arabia. Tom said, “it was not unusual to produce orders for 10 to 15,000 suits at a time, as Noel Hanlon was exceptional at sourcing and getting contracts over the line.”

When Tom arrived at Manford in the early eighties he wasn’t to know that they were the final years for the fashion production sector in Ireland.

Facilities were producing the same garments far cheaper in Bulgaria, Romania, and subsequently the Far East and China, who simply priced them out of the market.

The closure of Manford, and the loss of 200 jobs, was a huge loss to Ballymahon as it had been a major employer, and it signalled the end really for the fashion production businesses in the country. The handful of remaining manufacturers all closed in the intervening years.

Tom reinvented himself in 1991 with Kelly Menswear on the Athlone Road in Longford.

He set up initially to cater for the one-off bespoke suit and explained: “When we were in Ballymahon and especially on mart days we would have had men come in looking for tailor made suits but we weren’t set up to cater for single items, as we were a full scale manufacturing plant.”

So that was the market he went after initially and the business quickly grew.

At the height of boom, Kelly Menswear employed 14 people in the tailoring division and in tandem with this Tom also developed the retail shop with a full range of ready made and off the rail products.

But much like the Eastern European producers sounding the death knell for Irish manufacturers, the winds of changes were soon to blow through the retail sector once again.

“It was two dimensional,” said Tom. “On the one hand, you have the growth of online shopping, and really, young people have little value on quality - everything is based on price and they see clothes as disposable.

“Retailers like myself are simply being blown out of the water by the big outlets and online sites, who are sourcing big volumes for low money in the Far East and it simply isn’t a level playing field anymore.”

Tom says he enjoyed his time in the trade and never wanted to do anything else.

“The business was good to me and I met great people and enjoyed every minute of it. I wouldn’t change it for the world but now it is time to wind down and try something different.”