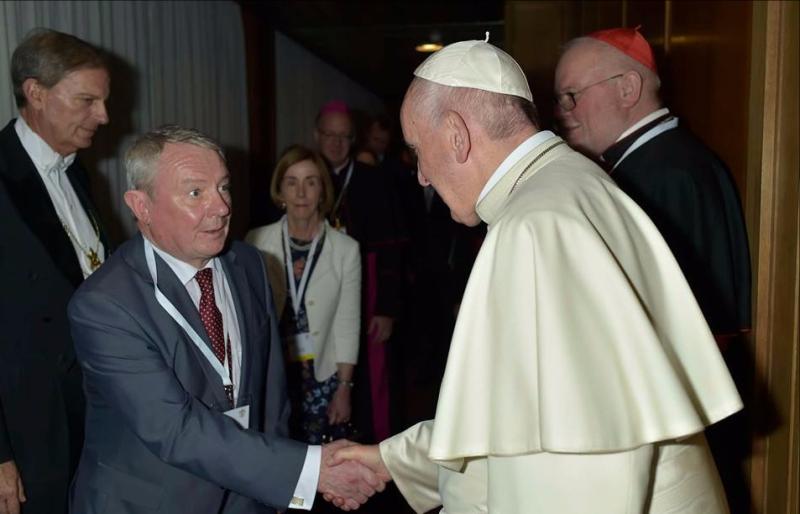 Cllr Seamus Butler (FF) was invited by the Irish Bishop’s Conference to participate in a discussion on the EU at a catholic bishops conference in Rome at the end of October.

The Pope took part in the gathering which was promoted by the Commission of EU Bishops Conferences (Comece) and the Holy See to coincide with the 60th anniversary of the Treaty of Rome.

Cllr Butler and his wife Marie met Pope Francis during proceedings, which were entitled ‘Rethinking Europe’ and were also provided with an opportunity to attend Sunday Mass at the Irish College in the city.

The local area representative in Longford town was also one of just 12 Irish delegates that were in attendance and he said “it was a great honour” to be there.

“The Conference wasn’t religious by any means and in fact it was quite a secular event,” Cllr Butler told the Leader, before pointing out that those present were broken up in small groups enabling them to discuss domestic issues more openly.

There were around 300 delegates in attendance from all over Europe comprising journalists, MEPs, businessmen and women, etc.

“The Treaty of Rome was established to encourage economic cooperation and closer integration between European member states so that another world war could be avoided,” said Cllr Butler before pointing to the fact that despite that many domestic issues that the EU has including Catalonian independence and BREXIT, Ireland has enjoyed a relative stable democracy since the foundation of the State.

“I contributed about rural Europe during the Conference and was interested to learn that right across the members States young people are choosing more and more to live in cities and leave their rural communities.

“The Conference got people thinking and made me realise that a lot of domestic problems are the same right across the EU.

“We have a lot more in common with each other than we realised.”
Cllr Butler, meanwhile said he was very honoured to be present at such a prestigious European event.

“All of need to look outwards now, we can all learn so much from each other,” he concluded.