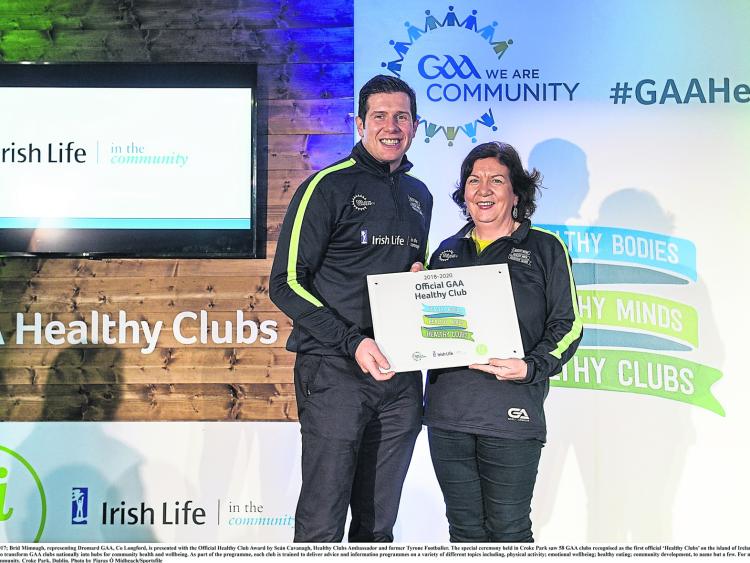 Dromard is among twenty Leinster GAA clubs that can now proudly fly a flag above their grounds (endorsed by both Healthy Ireland and the Public Health Agency in NI), letting their members and communities know that they value health and wellbeing as much as leagues and championships.

A special ceremony with governmental representation in Croke Park on Saturday, November 4, saw 58 GAA clubs recognised as the first official ‘Healthy Clubs’ on the island of Ireland.

In January 2016, almost 100 clubs applied to participate in Phase 2 of the project (just 16 participated in Phase 1 between 2013-2015).
Many cited the dearth of services in their communities that are tackling issues such as obesity, sedentary lifestyles, mental health and suicide. They wanted to be part of the solution.

Clubs engage with their members and community before identifying health themes upon which to focus on. Most common include healthy eating; physical activity for non-playing members; emotional wellbeing; engaging older members of the community; youth development; gambling, drug, and alcohol education; and inclusion and integration. Almost half of the clubs (29) also opted to become completely smoke-free venues as part of their 18-month journey.

Progressive GAA club, Dromard is the first club in Longford to receive national recognition. They made history earlier in the year when they launched their complete smoke free club policy, the first of its kind in Longford, setting a positive example for young members.

The aim is to protect the health of all individuals involved with the club and the policy applies to all members, officials, coaches, players, parents, visitors and volunteers.

Recognising that role modelling can have a significant impact on the junior members of the club, two club ambassadors have been appointed to help promote the project, Cait Murphy from the Ladies Club and Paul McGee from the Senior Squad.

The club is now the picture of health decorated with smoke free signage (provided by the GAA through a CSR partnership with Irish Life) and posters from the children at Dromard National School, ensuring that all members and visitors are aware of the club’s commitment to health.

The smoke free project is part of a number of initiatives which the club have ran over the last number of months, including Recipes for Success and the Operation Transformation which have proved to be an outstanding success with the whole club and community getting involved.

The OT project culminated with over 350 participants taking part in the Longford parkrun on Saturday, March 4 with the vast majority of these from the parish.